One in three Britons are vowing to continue money-saving habits created by lockdown and reduce the amount of time they spend eating out in UK restaurants.

New data published by online bank Marcus by Goldman Sachs also reveal that one in five Britons have slashed spending on takeaways while 25 per cent of people surveyed have said they will carry on doing more home-cooking going forward.

The shock survey a blow to the Government's efforts to kickstart the UK economy after being effectively mothballed during the pandemic.

It also shows that it will take more than Chancellor Rishi Sunak's hugely popular Eat Out to Help Out scheme to revive Britain's hospitality sector.

Meanwhile, 12 per cent polled said they will not return to indoor gyms, having bought home equipment and paid for online fitness subscriptions.

Eleven per cent claim they will not go back to Beauty salons, while 25 per cent of all surveyed are choosing not to spend as much on clothes in future.

And 18 per cent admit they will not go on holidays abroad as regularly as they were pre-coronavirus in light of the Government's quarantine list.

Of those who have managed to save more money than usual during lockdown, 29 per cent said they have put away around £340 more than they normally would. 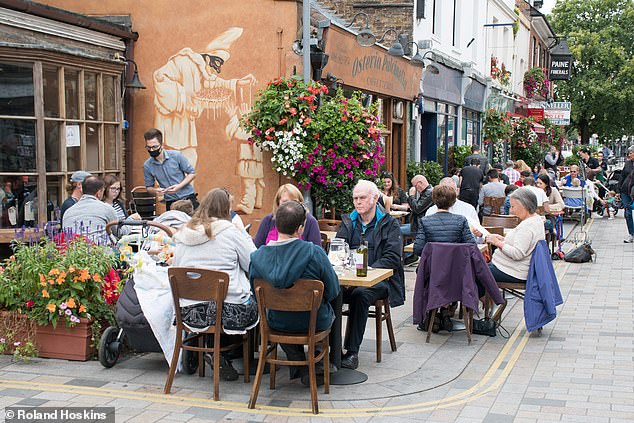 One in three Britons are vowing to continue money-saving habits created by lockdown and reduce the amount of time they spend eating out in UK restaurants (pictured: restaurants and cafes in Church Street, Twickenham on the last day of the Eat Out scheme on Monday) 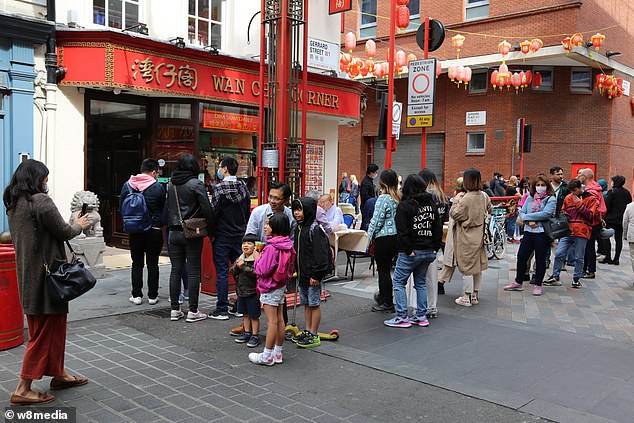 New data published by a Goldman Sachs-affiliated bank also reveal that one in five Britons have slashed spending on takeaways while 25 per cent of people surveyed have said they will carry on doing more home-cooking going forward (pictured: Eat Out diners on Monday)

So much for getting back to the office! Day two of Britain's big back-to-work drive and roads and trains look ominously empty

Britain's roads and railways were still almost empty today as the drive to get workers back to offices following the summer holidays stalled again.

While some London Underground trains were beginning to look busier during rush hour this morning, hardly anyone was to be seen arriving at major terminals in the capital including Waterloo and Paddington.

Commuters travelling into London on train lines such as Great Western Railway and Southeastern also tweeted photographs of near-empty carriages, while pictures of the M40 during rush hour also showed very light traffic.

London transport networks are barely busier than last week, with Tube use yesterday still more than 70 per cent down on this time last year. Buses in the capital are now carrying only half their usual numbers.

Not eating out so often (60 per cent) and not spending money at bars and pubs (49 per cent) are apparently the most common reasons people have been saving money.

The survey also found that 18 to 34-year-olds are most likely to continue the money saving habits they have picked up over the past few months.

New saving habits created by the lockdown are already impacting Britain's restaurants, which were deserted yesterday just 24 hours after the Chancellor's popular Eat Out to Help Out scheme came to an end.

Mr Sunak's programme encouraged millions of diners to eat out at discounted prices in select UK restaurants at a cost of £400million to the taxpayer.

But photos published by MailOnline yesterday showed that Britons, accustomed to saving money during lockdown, stopped eating as soon as the scheme ended.

Images of the same venues which contrasted deserted restaurants on Tuesday with the same previously packed out venues on Monday sparked fears that London's West End could lose £10billion a year and 50,000 jobs as tourism collapses.

Nickie Aiken, Tory MP for Cities of London and Westminster, said 50,000 people in the capital's retail sector face losing their jobs due to the lack of visitors.

'Almost half of the £10billion annual spend in the West End is from overseas travellers and then the lack of office workers who have not been back at their desks since March, that has a huge effect on the overall turnover of West End shops and hospitality,' she told BBC Radio 4's Today show yesterday.

'Between about 70 to 80 per cent - you're basically looking at about 50,000 job losses retail job losses in West End retail alone.' 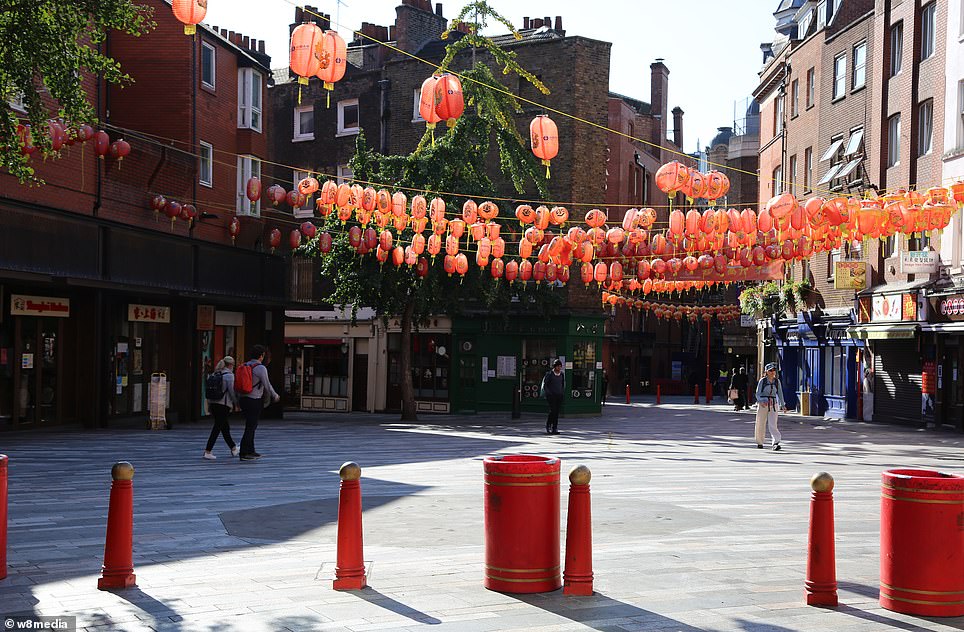 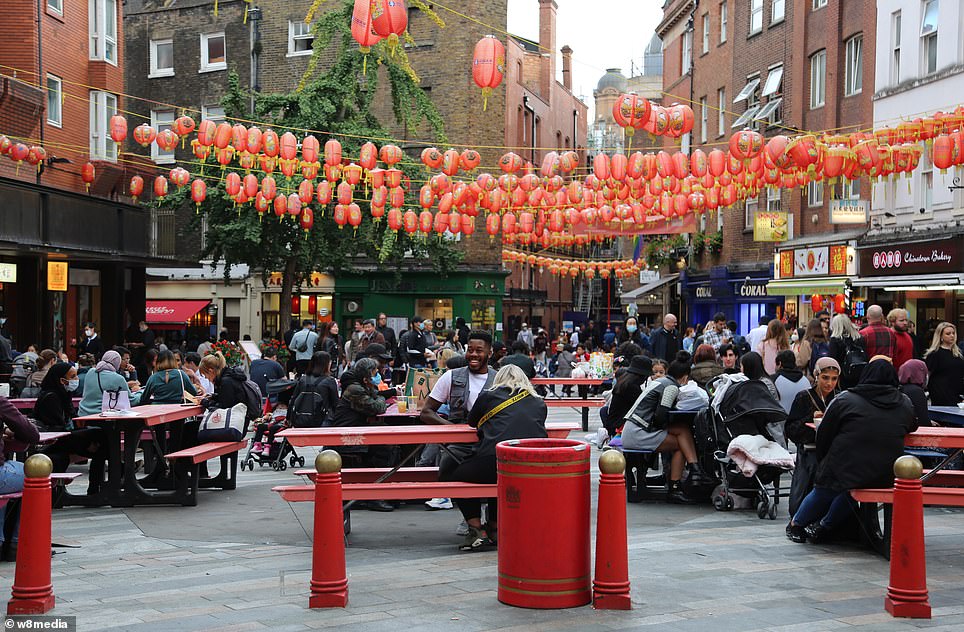 What a difference a day makes: The packed streets of Monday were left abandoned in just 24 hours in the West End 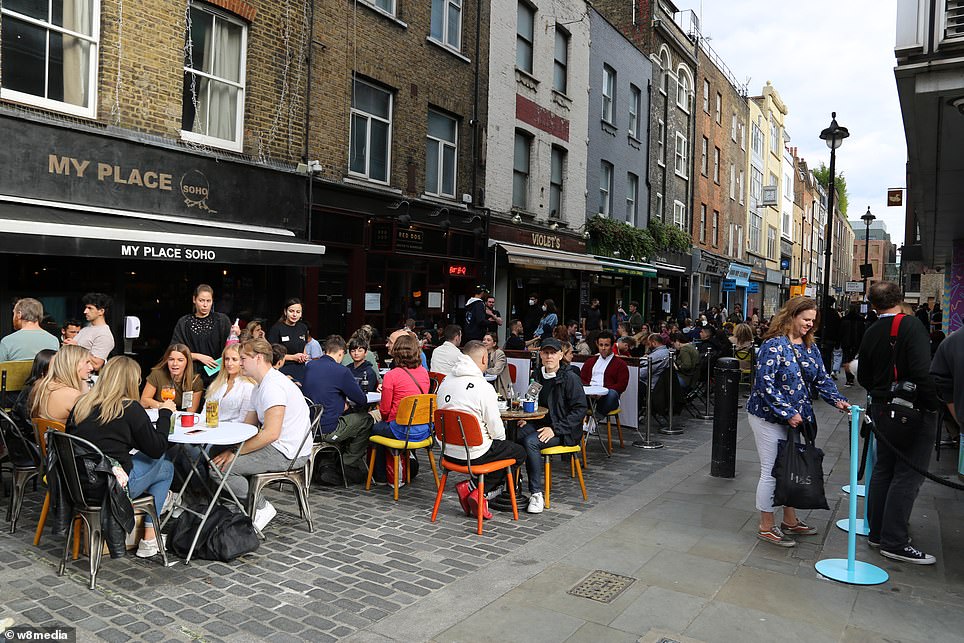 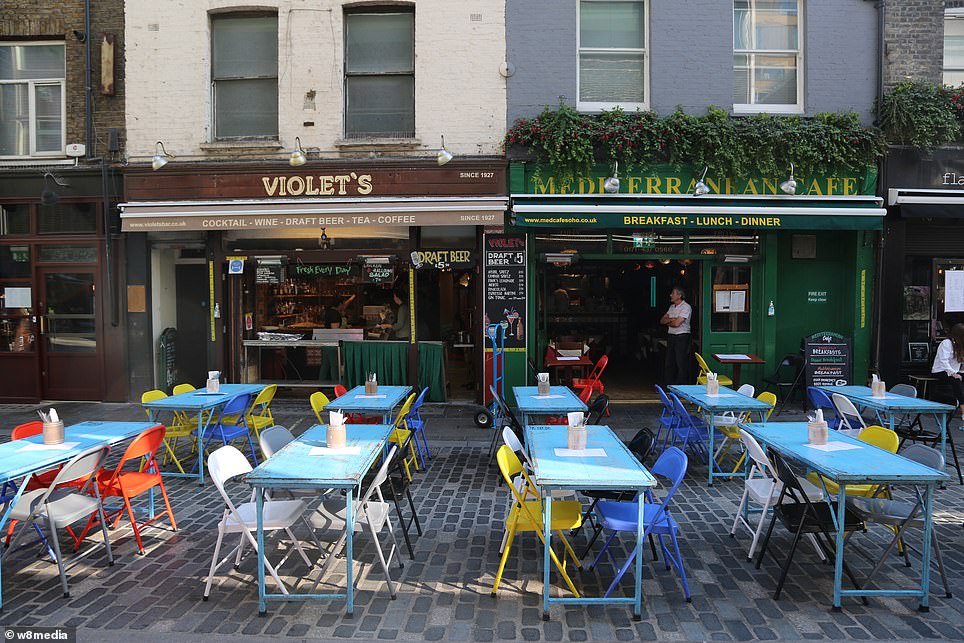 Staying away: Many took part in the Eat Out to Help Out scheme (left) but by yesterday (right) the same places were very quiet 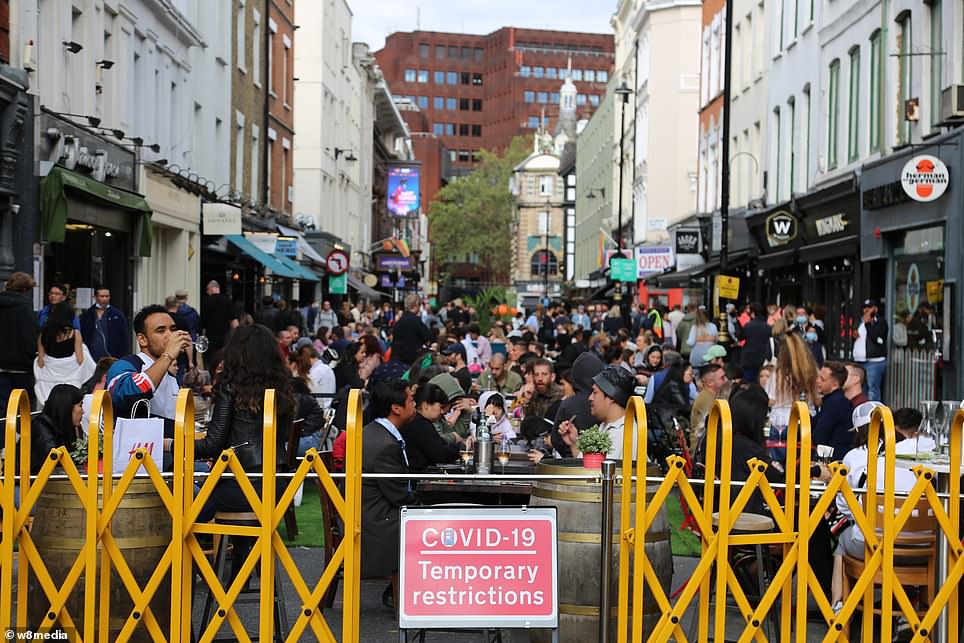 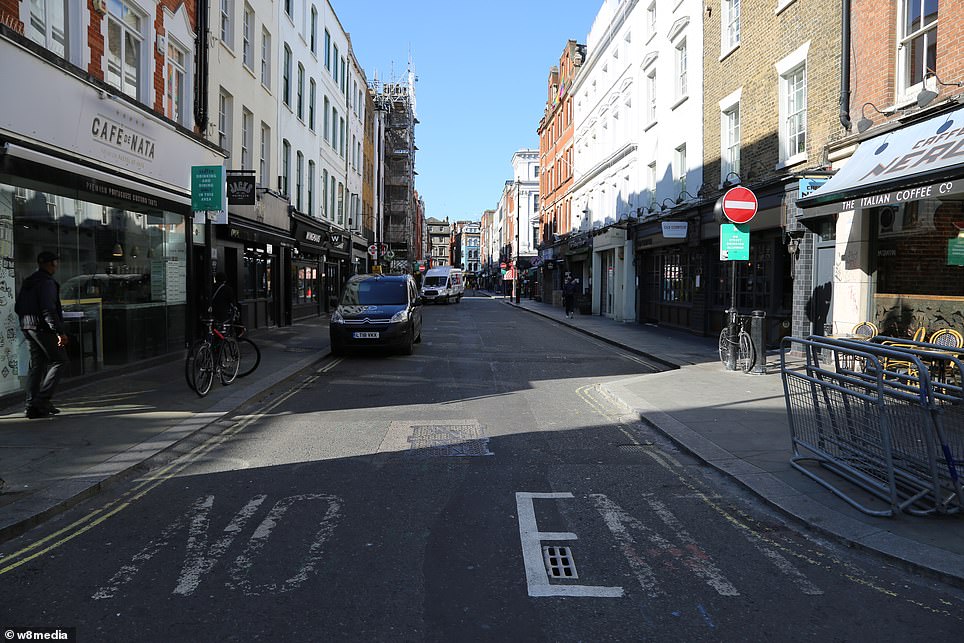 Meanwhile, the British drugmaker yesterday struck a £15million deal with Oxford Biomedica to mass-produce the vaccine if it is proven to be effective.

To prove without doubt that it protects people from infection, vaccines need to go through rigorous phase three trials.

She added: 'We've got to get that back, we've got to get businesses, the Mayor of London and Government to work together to provide that confidence to get people back in.'

The doomsday-style predictions came as Edinburgh said it had seen a two million slump in visitor numbers in August.

Hospitality chiefs said the absence of 25,000 performers and the demise of 'the after-work pint' contributed to the fall.

The number of people on the streets of the Scottish capital was down to 700,000 in