Illusionist and magician David Blaine floated more than 24,000 feet above the Arizona desert held up by a cluster of balloons in his latest daring stunt.

The 47-year-old's 'Ascension' stunt kicked off in Page, Arizona on Wednesday morning.

The stunt, which was livestreamed on YouTube, saw Blaine float 24,000 feet in the air held up by 52 helium-filled balloons.

After reaching 24,000 feet, Blaine - who had a parachute attached to him - skydived back down.

The stunt lasted about an hour. 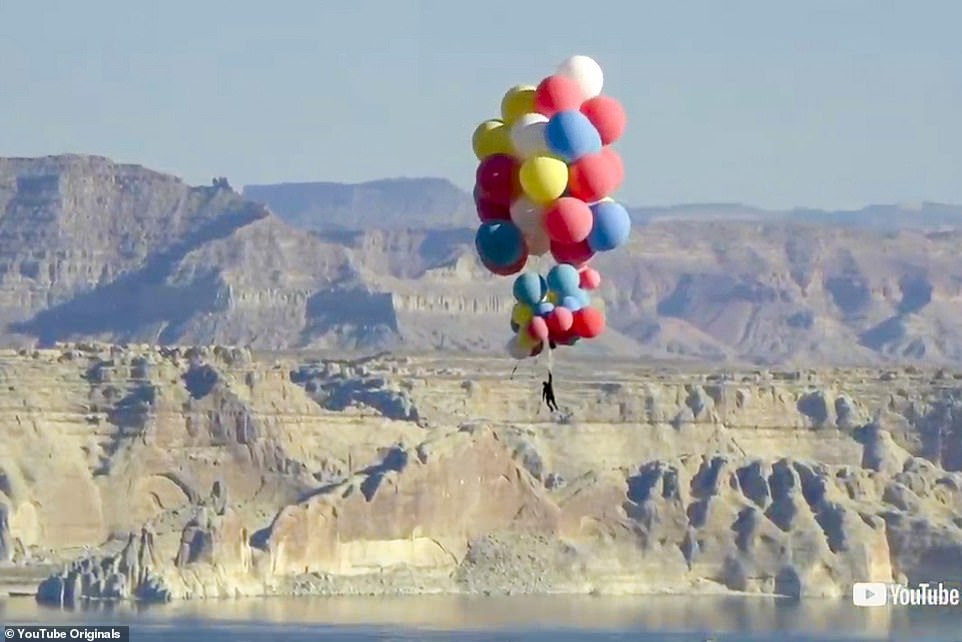 Illusionist and magician David Blaine launched his 'Ascension' stunt in Page, Arizona on Wednesday when he floated 18,000 feet above the ground held up by 52 helium balloons 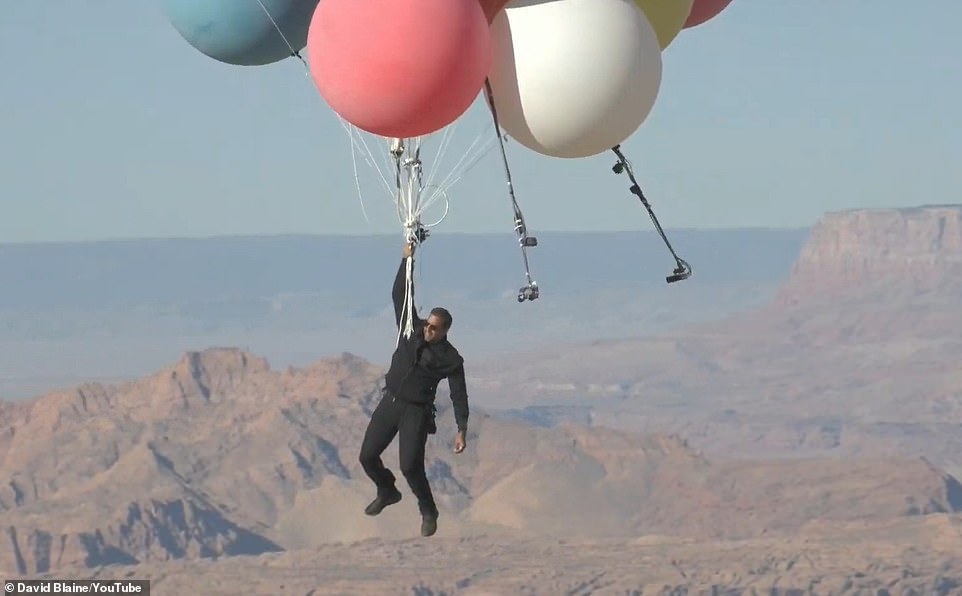 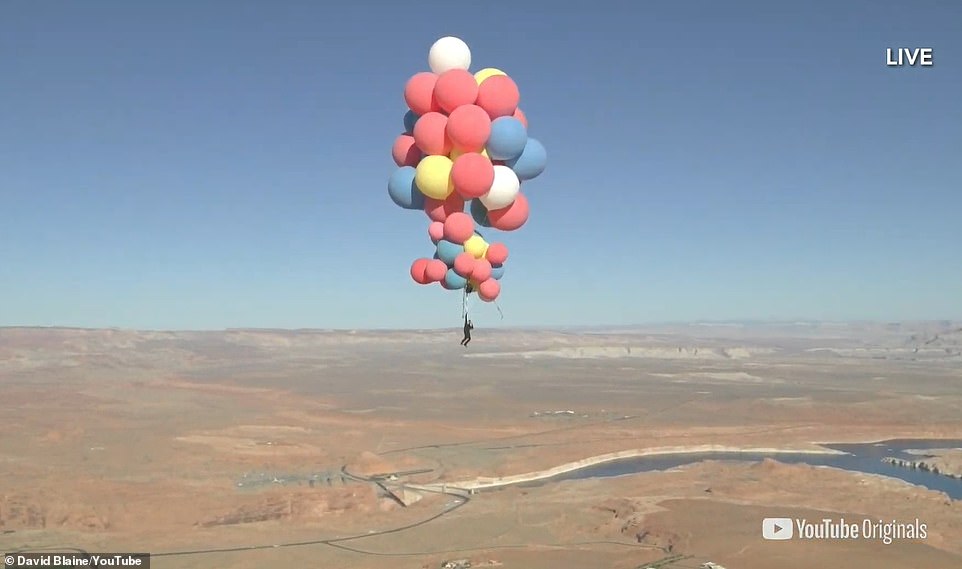 The illusionist, who had an oxygen mask throughout, was climbing at about 500 feet a minute throughout the stunt

Shortly after taking off, Blaine slowly started dropping five pound weights to ascend even higher. The illusionist, who had an oxygen mask throughout, was climbing at about 500 feet a minute throughout.

At about 8,000 feet, Blaine started strapping himself into a parachute.

Just prior to getting underway, Blaine said the stunt felt 'way crazier' than anything he has ever previously done.

'This thing feels insane. Normally I feel like I have control... this I have no control over anything,' he said.

His nine-year-old daughter Dessa watched on from the ground and spoke to him several times while he was in the air.

The stunt, which was initially scheduled to be held in his hometown of New York City, had to be postponed earlier this week due to unfavorable weather and wind conditions.

Blaine has previously said he was inspired to duplicate the image from the 1956 French film Le Ballon Rouge where a little boy goes floating into the sky holding onto a pack of balloons.

He said he has spent the last two years preparing for his latest stunt. He says he obtained a pilot's license, a commercial balloon pilot's license and learned to skydive ahead of the stunt. 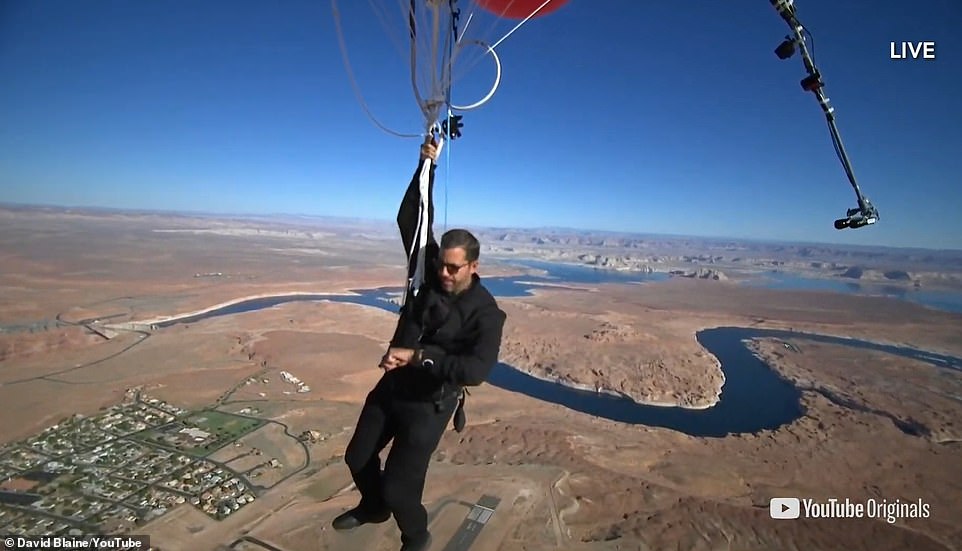 The stunt, which is being livestreamed on YouTube, will see Blaine float 18,000 feet - or 3.2 miles - in the air held up only by the cluster of balloons 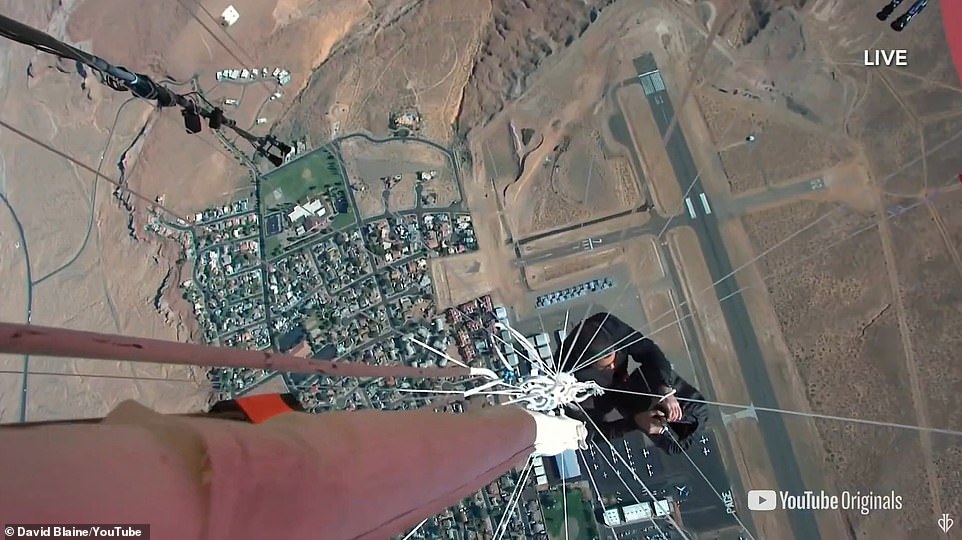 Shortly after taking off, Blaine started dropping five pound weights to ascend higher. He was climbing