Donald Trump's daughter-in-law Lara Trump campaigns with Laura Loomer despite Republican candidate being a Parkland shooting 'truther' and prolific conspiracy theorist Lara Trump is the wife of Eric Trump who spoke at the GOP convention She is a Trump campaign advisor and campaigned with Loomer Loomer beat back five GOP opponents in primary for seat that includes Mar-a-Lago Trump tweeted last month 'Great going Laura' after primary win Loomer has called herself a '#ProudIslamophobe' After Parkland shooting she sent tweet suggesting they were acting, writing: 'Its obvious these kids are reading a screen or notes'

President Trump's daughter in law Laura Trump campaigned in Florida with House GOP candidate Laura Loomer, who has latched on to numerous conspiracy theories and raised doubts about the survivors of the Parkland shooting.

Laura Trump, who snagged a prominent role speaking at the Republican National Convention as did her husband, Eric, campaigned with Loomer Tuesday in her Palm Beach district.

The district includes Mar-a-Lago, which the president now lists as his permanent residence and where he has filed to vote absentee by mail. 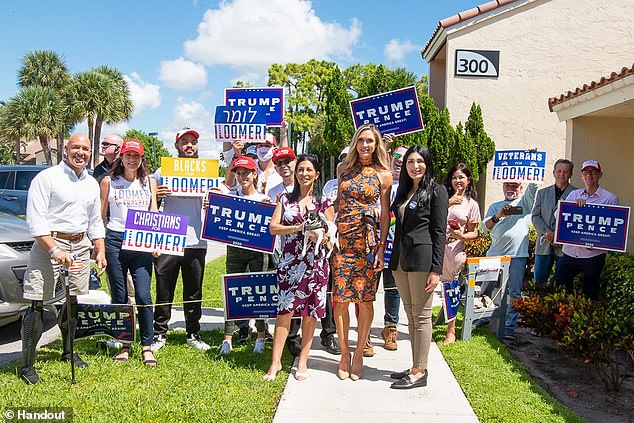 Loomer has called herself a '#proud Islamophobe' and has has promoted conspiracy theories online.

After the Parkland shootings she sent tweet suggesting they were acting, writing: 'Its obvious these kids are reading a