The coronavirus testing system is facing strain due to growing demand for swabs - prompting the Government to start rationing testing slots.

Britons who show Covid symptoms can apply for drive-through tests, but some have revealed they are directed to centres more than 100 miles away.

The Government says parts of the country that have seen fewer cases have had their capacity to carry out tests reduced in order to better manage outbreaks, but public health experts claim this could lead to overlooking new spikes, the BBC reports.

It comes following a MailOnline investigation that revealed claims of callers to the 119 service being told no postal swabs or drive-through spots were available.

One said she was told the nearest available test was in Bradford in West Yorkshire, some 200 miles away from the capital.

Now Britons have revealed long journeys assigned to them by the Government's testing website, including Devon to Carmarthen, 109 miles away, Cumbria to Dumfries (50 miles), and south London to Newport (73 miles).

Health Secretary Matt Hancock has now defended the coronavirus testing regime as working 'well' despite some people being directed to centres more than 100 miles away.

He told Sky News the issue was part of the reason why the Government was investing in trials of 20-minute Covid-19 tests. 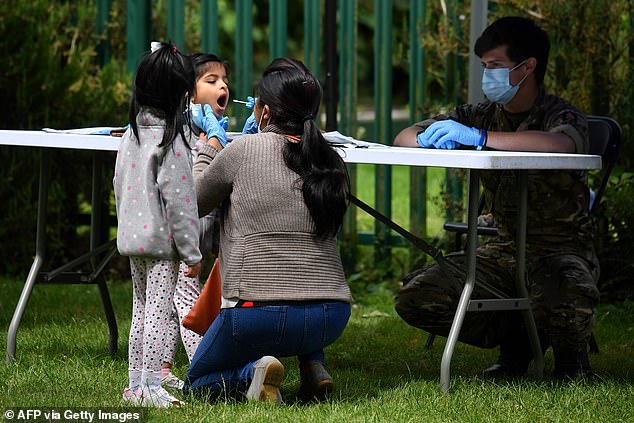 Britons who show Covid symptoms can apply for drive-through tests, but some have revealed they are directed to centres more than 100 miles away (pictured: A family member administers a self-test to a child at a station in Leicester)

Mr Hancock said: 'At the moment the system works well. Of course there are operational challenges from time to time but it works well.

'And we're finding a higher and higher proportion of people in the country who have coronavirus and getting them tests so they can be looked after.

'But absolutely we need to roll out more testing - we have done throughout this crisis and today's another step in solving some of those problems with the existing technology.'

He said a decision on whether travellers would need to quarantine when arriving from Portugal would be made on Friday.

Mr Hancock was unable to say whether someone could travel to Portugal on Friday without needing to quarantine on their return, when pressed.

'The simpler answer is that we follow the data and we make these announcements in an organised way on a Friday lunchtime,' he said.

'We are going to publish a further decision tomorrow having looked at the data and I'm not going to pre-judge that.'

Chief medical adviser, Professor Chris Whitty, now says he thinks the winter will bring additional challenges for managing the virus, with any potential mass return to work holding the potential for even more testing demand.

Now the Health Secretary has announced a new £500 million funding package will support trials of a 20-minute Covid-19 test and efforts to explore the benefits of repeatedly testing people for the virus. 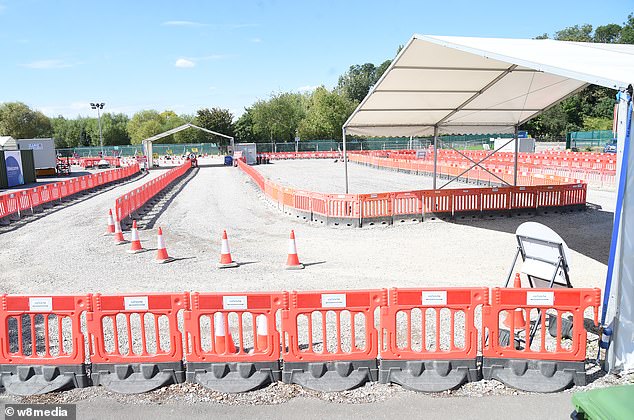 Existing trials in Southampton and Hampshire, using a no-swab saliva test and a rapid 20-minute test, will also be expanded through the new funding.

Health Secretary Matt Hancock said: 'Testing is a vital line of defence in combating this pandemic.

'Over the past six months we have built almost from scratch one of the biggest testing systems in the world.

'We need to use every new innovation at our disposal to expand the use of testing, and build the

PREV Break a leg! Woman get a fright when her mother falls through her ceiling as ...
NEXT Four Navy aircrew parachute to safety moments before E-2C Hawkeye plane crashes ...