The Department of Health today revealed it is investing £500million in getting rapid on-the-spot coronavirus tests into public use in its battle against Covid-19.

'Lab in a van' mobile testing will allow anyone, even those who don't feel ill, to get tested quickly at any time and receive their results within minutes, according to Health Secretary Matt Hancock.

But first the tests must be proven to work. Although officials say they appear to be on par with the current swab tests, they have not yet been used en masse.

Trials in Salford, Southampton and Hampshire will blaze the trail for the tests, which could change the way people live with coronavirus.

Mr Hancock suggested that if regular, mass testing can come as a result of these devices, it would be the country's 'best shot' at spelling the end of social distancing rules in the absence of a vaccine.

Tests made by the companies Oxford Nanopore (LamPORE technology), Optigene and DNANudge are all being trialled by the British Government on members of the public.

Meanwhile, NHS hospitals are using a swab test-processing machine called the SAMBA II and Public Health England is evaluating kits made in the style of pregnancy tests which could become available in the future.

MailOnline takes a look at some of the tech that could be used in the UK: 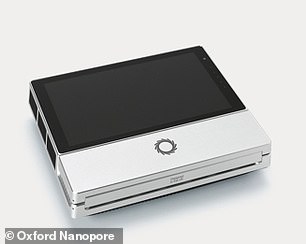 The small LamPORE test could be deployed in airports, offices, schools, pubs and restaurants – bringing testing to the bulk of the population

Biotech company Oxford Nanopore has developed a portable swab-recording device called LamPORE, which can determine whether a user has Covid in the space of an hour-and-a-half. 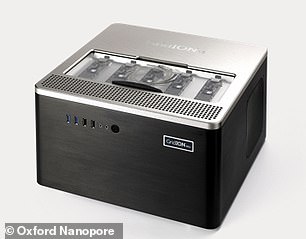 The larger device is more suitable for hospitals and airports

The machines take 90 minutes to give a result and can process around 30,000 samples a day.

It involves taking a sample of saliva, unlike existing methods which require invasive and difficult nose and throat swabs.

The LamPORE device, which also comes in a desktop version which is about the size of a printer, uses electronic means to record and analyse the samples.

Each test is given a barcode which is individually assessed before returning back with the result - without having to wait for swabs to be sent to the laboratory.

WHICH TESTS ARE THE GOVERNMENT USING IN THE NEW TRIALS?

Optigene: The Optigene testing kit, which can use nasal swabs or saliva samples, is being used in pilots in Southampton and Salford, Greater Manchester.

A study done during a trial in a Hampshire hospital trust found the tests to be 97% accurate.

LamPORE: The LamPORE technology has been bought in a batch of 450,000 kits by the UK Government and they will be used in the Salford and Southampton trials, and on 2,100 people in schools in the port city.

DNANudge: Officials have bought 5.8million DNANudge tests to be used in 5,000 machines, at a cost of £161million. They will be used in NHS hospitals to analyse nose swabs at speed.

The portable version of the LamPORE device is the same size as a CD player.

Ministers have ordered 450,000 of the tests, which are now being trialled in Salford and Southampton. Millions more are due to be rolled out later in the year if they prove to be effective.

The Salford trial will invite people in the community to come for weekly tests using a new saliva Covid-19 test that produces results in under an hour and a half.

The pilot will begin with a select number of participants and up to 250 tests a day, to be scaled to the whole area.

Initially, the pilot will focus on specific high footfall locations in the city, which includes retail, public services, transport and faith spaces.

Phase two of the no-swab saliva test pilot in Southampton will also start this week.

The second phase of the pilot will trial the weekly testing model in educational settings, with participation from staff and students at the University of Southampton and four Southampton schools.

Over 2,100 pupils and staff across four schools will be invited to have a test as part of the pilot, which is led by a partnership of the University of Southampton, Southampton City Council and the NHS.

The makers of the test have not revealed how accurate it is, and the Government has refused to divulge that information, too.

'I am hugely grateful for the fantastic work Oxford Nanopore have done to push forward this important innovation in coronavirus testing.' 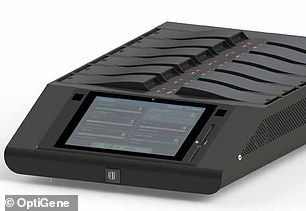 Once swabs have been collected from patients, the samples are loaded into the devices, known as the Genie HT, which look for tiny traces of the virus in their DNA.

The machines amplify the DNA billions of times chemically so they can detect the virus with extreme sensitivity. They can also be used with saliva samples.

The device has proven to be just as accurate as PCR swabs, which take days to give results, in clinical trials by Public Health England.

In contrast to the widely used PCR tests, which need be processed at different temperatures, the Genie HT does not require a change in temperature to detect results.

It is currently being trialled by the Government on thousands in A&E departments, GP coronavirus testing hubs and care homes across Hampshire, and will be rolled out in the new testing programmes in Salford and Southampton.

Four thousand people of all ages have been involved in the Hampshire Hospitals NHS Trust trial.

A study done during that trial Hampshire have found the test to be 97 per cent sensitive, meaning it can find 97 out of 100 positive cases, and 99 per cent specific, meaning only one in 100 people would get a