Annastacia Palaszczuk has told the Morrison government to stop 'intimidating' her over her state's tough borders.

She also claimed any state which was awarded the AFL grand final would have made the same decision to allow hundreds of staff, players and WAGs to enter.

The Queensland premier has come under fire from federal treasurer Josh Frydenberg for keeping the border closed to parts of New South Wales and the ACT that have no community transmission of coronavirus. 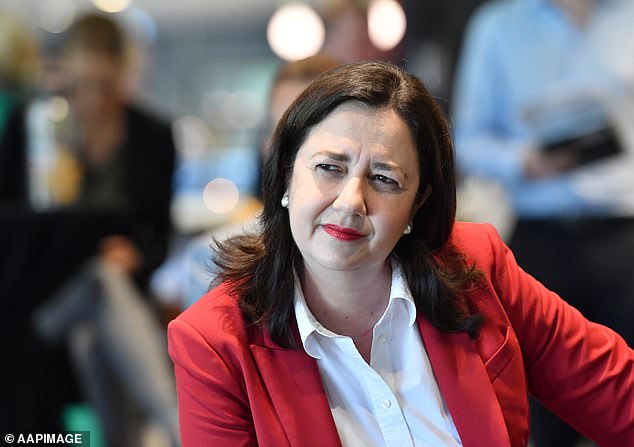 She said he found the criticism 'intimidating' and that it upsets her family.

But Ms Palaszczuk said she would not open her borders anytime soon.

'I think it's a bit disingenuous for this heightened criticism that is coming from a whole lot of levels when our fundamental concern is to look after Queenslanders and to make sure that they are safe during this time,' she told reporters today.

'I do not want to see what has happened in our aged care sector in NSW and in Victoria happen here in Queensland. That would be a nightmare.'

The state's chief health officer Jeanette Young said a state would need to have 28 days with no community transmission before residents are allowed in to Queensland.

NSW Premier Gladys Berejiklian said: 'I don't know if we'll ever get to that number. They're putting on a pretty big ask during a pandemic.'

On Wednesday Mr Frydenberg slammed Ms Palaszczuk's decision to allow the families of AFL players into the state.

'I think the Queensland Premier has got some questions to answer here,' he told A Current Affair.

'How can it be okay for people to go up to prepare for a footy game, and its not okay to go to hospital for treatment?'

Mr Frydenberg referenced several tragic examples of New South Wales locals not being allowed to cross the border during the pandemic.

'How can it be okay that a young woman loses an unborn child because of border confusion... that a four-year-old boy with cancer can be separated from his mother?

'These are cruel and confused implications from these strict border approaches... I think everyone needs to get a grip here and remember that we're first and last Australians.'

October 24 will mark the