WHERE ARE RESTRICTIONS BEING EASED? AND WHERE ARE THEY REMAINING?

In Oldham, in addition to a household mixing ban indoors, residents will continue to be advised to avoid mixing with anyone from another household anywhere.

A ban on two households mixing indoors will continue in Preston, Pendle and parts of Blackburn.

In parts of Blackburn Blackburn and parts of Pendle residents will continue to be advised to avoid mixing with anyone from another household anywhere.

Indoor gatherings restrictions remain, the next review of these measures will take place by 11th September.

Urban areas of Bradford, where the ban on indoor household gatherings is in place.

In Kirklees, the ban on indoor household gatherings will continue in Dewsbury and Batley.

The ban will also continue in parts of Calderdale.

Leeds is teetering on the brink of a local lockdown and has been added to Public Health England's list of areas of concern - while measures will be eased in swathes of Greater Manchester, Lancashire and Leicester next week.

The Yorkshire city, home to half a million people, has seen its infection rate rise to 32.4 new cases per 100,000 people, bringing it to the attention of authorities.

One in every 29 people who gets tested there - 3.5 per cent - is testing positive, according to official data.

If cases cannot be kept under wraps with a tougher testing regime, stricter rules might have to be brought in to maintain social distancing and drive the virus out.

Lockdown measures could also be reintroduced in Lanarkshire, Scotland, because of rising infection rates in the region.

NHS Lanarkshire's director of public heath has warned the region is 'very close' to having to reimplement restrictions, similar to those introduced in the Glasgow area, after the number of cases rose by 16.

Lanarkshire's health board has now identified 3,044 confirmed cases, an increase of 111 in the past five days.

Socially distanced indoor performances will also be able to resume, and remaining restrictions on certain close contact services will be lifted.

Newark and Sherwood, Slough and Wakefield will be removed from the Government's coronavirus Watchlist - but Leeds, South Tyneside, Corby, Middlesbrough and Kettering have been added as areas of concern.

And the rates of coronavirus infection in Bolton are considered to be too high by the Government for these easements to be applied.

'We are seeing improvements in the rates of infection thanks to the huge efforts made by local communities and authorities working alongside our effective Test and Trace system.

'We must stay alert and I continue to encourage everyone to play their part by following local rules, self-isolating and requesting a free test as soon as they get any symptoms.'

The move was praised by Manchester mayor Andy Burnham, who said: 'We have been asking the Government to consider easing restrictions on business opening across Greater Manchester and welcome the Secretary of State's positive announcement today.

'There is no evidence that these businesses are causing the spread of the virus and we know that these premises are making arrangements to operate in a safe way.

'It is understandable that this won't apply in Bolton for the time being, but we will be working hard with Bolton Council and partners to move to a position where the restrictions on business opening can be eased as soon as possible.

'However, it is important people continue to follow the rules on no social gatherings in the home and the public health advice on washing hands, face coverings and social distancing.' 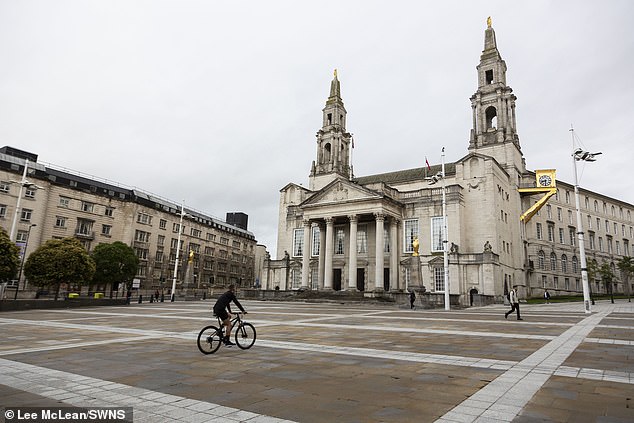 New figures show Leed's seven day infection rate has risen to 29.4 cases for every 100,000 people in the city - moving it on to a list with some of worst affected cities in the UK

WHERE ARE ENGLAND'S 20 COVID-19 HOTSPOTS?

Local authorities new cases in the seven days to August 30 as a rate of per 100,000 people.

Council bosses in Leeds say an increase in coronavirus cases among younger people across the city is to blame for the rise.

This is a trend being borne out across the country as increasing numbers of people return to work, pubs, restaurants, gyms and social events.

It joins a host of areas across the North of England and the Midlands that are facing high infections, with Leicester and parts of Greater Manchester and Lancashire still under lockdown rules.

Leeds City Council is already putting in its own measures, including encouraging employers to follow national guidance on working safely, providing specific support for care homes, schools and other places with groups of people and engaging with communities, businesses and partners.

It will also target youngsters with social media messaging to discourage gatherings.

In a statement the council said: 'The latest seven-day infection figures show Leeds as having a rate of 32.4 cases per 100,000 people and a positivity rate on testing of 3.5%.

'The latest data suggests that a lot of the cases are in different areas of the city, meaning they may be linked to social interaction and leisure activities.

'The spread is broad and changeable across wards and cases have also been increasingly detected in younger people aged 18-34, with some concern over activities like house parties and gatherings.'

Council leader Judith Blake said now was 'a pivotal moment in our efforts to control the spread of the virus'.

Lockdown measures could be reintroduced in Lanarkshire because of rising infection rates in the region.

NHS Lanarkshire's director of public heath has warned the region is 'very close' to having to reimplement lockdown restrictions, similar to those introduced in the Glasgow area, after the number of cases rose by 16.

Lanarkshire's health board has now identified 3,044 confirmed cases, an increase of 111 in the past five days.

Gabe Docherty said the figures 'should be a wake-up call' for the region's residents to stick to social distancing guidelines and avoid large household gatherings.

Calling for residents to try and limit the number of people they have contact with, Mr Docherty said: 'No-one wants another lockdown but Lanarkshire is very close to facing additional Covid-19 restrictions similar to those in Glasgow and neighbouring areas.

'Ahead of the weekend, and indeed beyond, we need everyone's help to avoid that happening by following well-publicised advice.'

She told the BBC: 'Nobody wants to see further restrictions on life in Leeds.

'The harsh reality is that if our infection rate continues to rise as it has been, we will be left with no alternative.'

The council said 44 new cases were identified in Leeds on Wednesday.

Ms Blake added: 'This is a rise in all different wards across the city, particularly in young adults of all communities.'

Leeds has so far managed to escape tighter lockdown restrictions imposed in other parts of West Yorkshire.

Cities such as Bradford have had restrictions, including restrictions on visiting other households, for several weeks due to a spike in cases.

But, along, with parts of Bradford, local Covid-19 restrictions were eased in northern England this week, allowing social gatherings between two homes from Wednesday in Stockport, Burnley, Hyndburn and parts of Calderdale and Kirklees.

Trafford and Bolton were also due to come out of local lockdown this week.

But government health chiefs performed a last minute U-turn after a spike in cases.

Matt Hancock said: 'We brought in measures to protect people in these parts of northern England.

'We're seeing the positive results of our local approach, and are able to bring in increasingly targeted measures.'

However Bradford was flagged one of seven new coronavirus hotspots in England and Wales flagged by a Covid-19 symptom-tracking app that uses data from more than three million people. 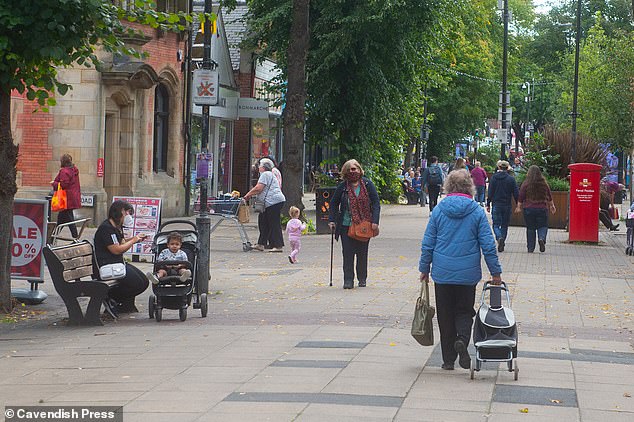