Authorities have released new video of a shootout that happened inside the lobby of a New York City apartment last month as the surge in local gun violence edges into autumn.

The Big Apple saw at concerning spike in gun-related violence as at least 10 people were shot over Labor Day Weekend.

In one instance, a 62-year-old Brooklyn resident was shot dead on Monday morning while walking his dogs near his home.

Just two hours before that, a six-year-old boy and his mother were among three others who were shot during a festival in the same borough.

Surveillance footage from the New York Police Department showed an incident that happened on August 25 inside the Marlboro Houses in the Gravesend neighborhood. 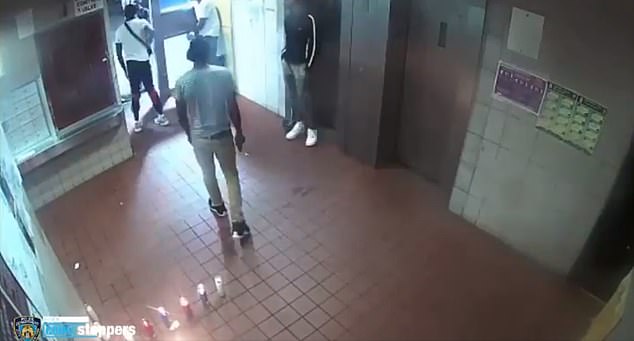 A group of unidentified men are seen standing inside an apartment building lobby and appear to be looking towards something outside.

One man, who brandishes a gun in his right hand, walks further into the lobby before raising the firearm towards the door.

It's unclear who opens fire first, but the group of men suddenly scrambles out of the way. A different man runs into the lobby and appears to fire a round out of the open door.

The NYPD said that no injuries were reported. They ask anyone with information on the shooting to call Call 1-800-577-TIPS or DM them on trough their NYPD Crime Stoppers page. 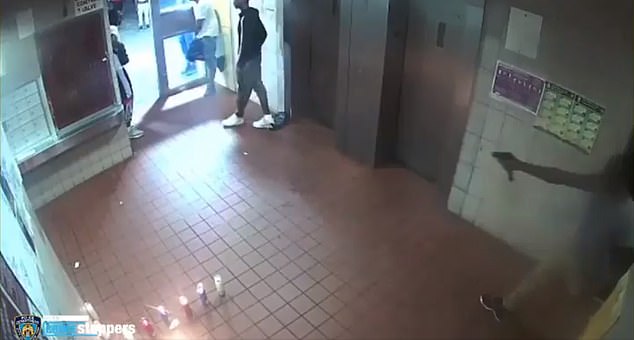 NYPD CompStat showed that shooting incidents were up 85 per cent, with 50 recorded this year and 27 in 2019.

The numbers continued to rise on Monday as a Brooklyn man was shot dead outside his Bay Ridge neighborhood home around 6:50am.

New York Daily News reports that Michael Scully. the owner of five cocker spaniels, was struck several times in the head and shoulders by the shooter.

Authorities said Scully got into an argument with the suspect after leaving his home to walk his dogs.

The suspect pulled out a gun, shot Scully and fled the scene before police officers arrived.

Scully was rushed to  NYU Langone Hospital, where he was pronounced dead. The suspect has not been brought into custody. 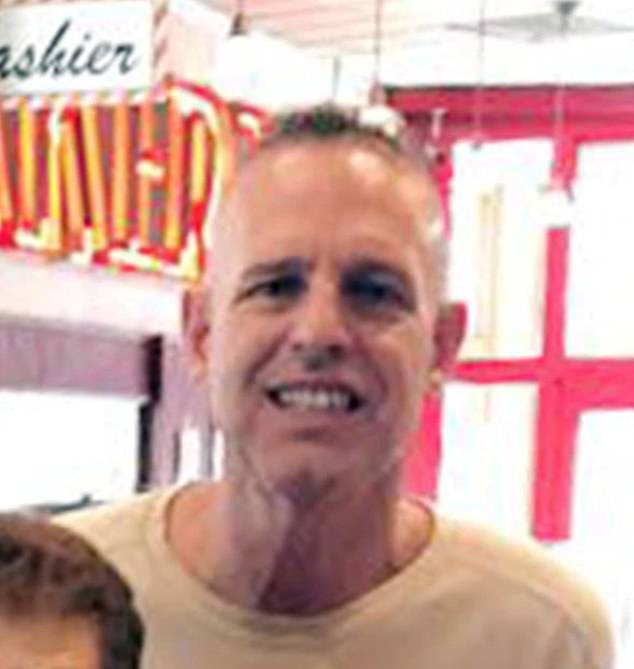 Michael Scully, 62, (pictured) was shot dead on Monday morning by an unidentified shooter in Brooklyn

'I don’t know who would do this,' said William Mendez, a longtime friend of Scully's. 'I don’t believe he had any enemies. Everybody loved Mike.'

According to friends of Scully, he was warm-hearted and kind man who spent several years working for a technology company. He liked to bring his dogs with him to church.

He was also an entrepreneur who bought and sold items, like perfumes and clothes, on the side. Scully kept a list of all the perfumes he had in stock, friends said.

Scully lived downstairs from his brother in a two-family home they shared. The brother was overcome with emotion as he hugged their sister outside their home just hours after the shooting, NYDN reports.

David Martinez, a longtime friend of Scully, said the man's girlfriend died about two years ago and the loss was devastating.

Her funeral was one of the only times