Daniel Andrews' extension of Melbourne's lockdown could destroy another 260,000 jobs in Victoria on top of the 432,000 already out of work, new modelling predicts.

Victoria's Labor Premier on Sunday announced he would be extending the draconian  Stage Four restrictions for another two weeks beyond the scheduled September 13 end date.

Strict measures to stop the spread of the coronavirus will continue until at least October 26, although some restrictions will be eased from midnight next Sunday.

The state on Monday recorded its lowest increase in cases in more than two months with only 41 coronavirus cases and nine additional deaths. 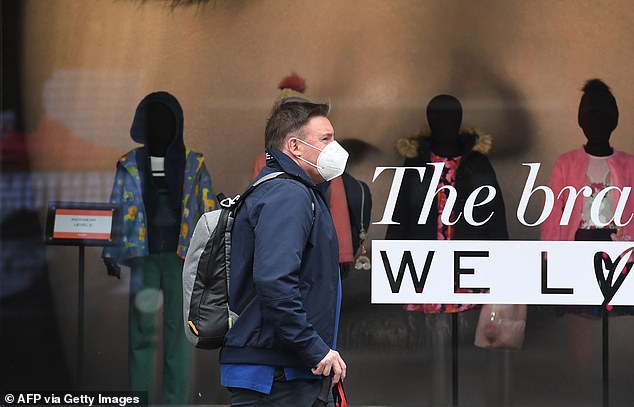 A masked pedestrian walks past a shop display in a deserted Burke Steet Mall in Melbourne's CBD on September 2. New modelling has suggested the city's extended lockdown could cost another 260,000 jobs

The Institute of Public Affairs, a free market think tank, has predicted the extended lockdown would cost Victorians 260,000 jobs between September 14 and November 23, with another 4,000 jobs set to be lost during the following week.

'He has disfigured Victoria with more lockdowns to deal with the second wave unleashed by his catastrophic ineptitude with hotel quarantine and contact tracing.'

The IPA calculated the first lockdown in March and the reintroduction of stricter, Stage Four meaures in August would have cost 696,000 jobs in eight months, based on weekly, Australian Bureau of Statistics payroll data.

The Reserve Bank of Australia is already expecting the national jobless rate to hit ten per cent by the end of 2020, a level unseen since 1994.

But Victoria's jobless rate is likely to reach higher levels that haven't been suffered in the state since the aftermath of the early 1990s recession.

Criticism of Mr Andrews' road map out of the lockdown has been growing since his Sunday announcement - with infectious diseases expert Professor Peter Collignon from the Australian National University arguing it was 'unrealistic' to wait for new daily case numbers to sink to five.

Step three of the road map will only come into place on October 26 if daily cases are five or lower.

But the Victorian leader on Monday evening issued a defiant justification of the plan in a social media post showing the risks involved with opening up too early. 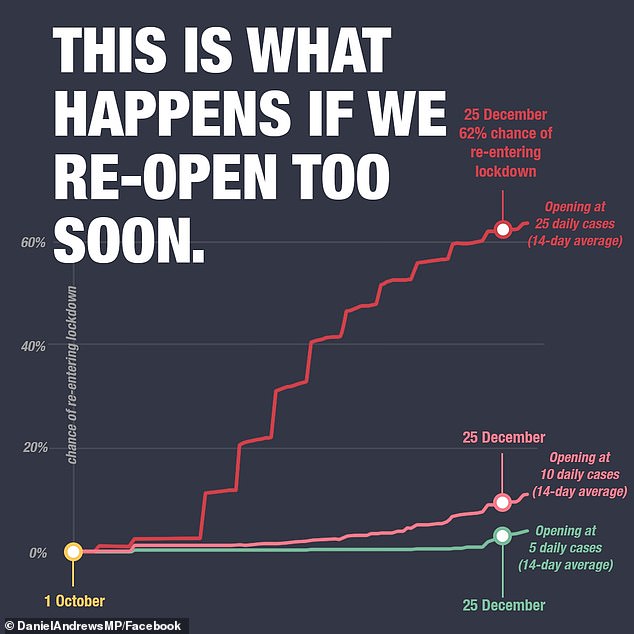 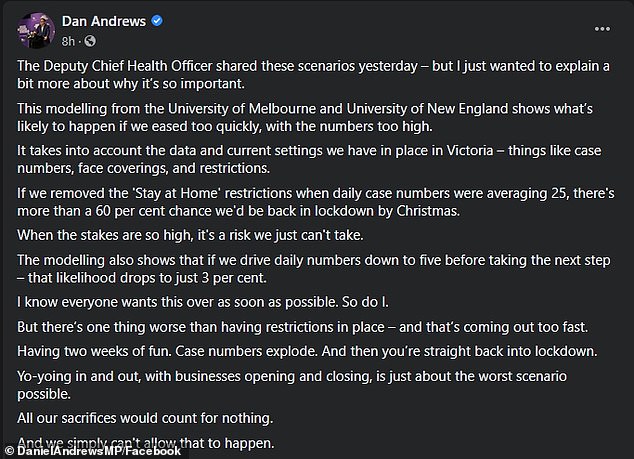 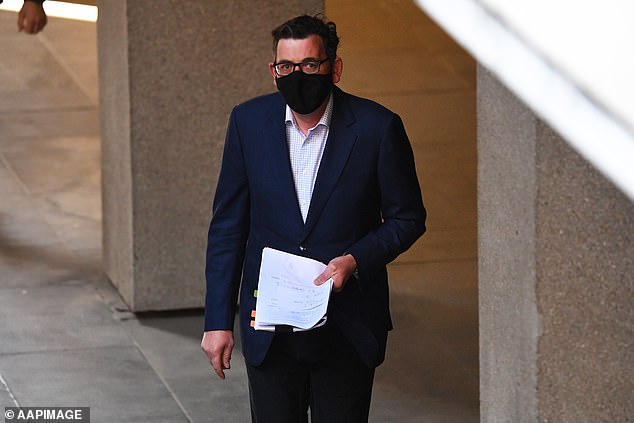 The modelling from the University of Melbourne and University of New England showed a 62 per cent chance of re-entering lockdown by Christmas if Victoria loosened restrictions at 25 daily cases.

By comparison, the data suggested opening at 10 or five daily cases carried less than a 20 per cent chance.

'Having two weeks of fun. Case numbers explode. And then you’re straight back into lockdown,' Mr Andrews wrote.

'Yo-yoing in and out, with businesses opening and closing, is just about the worst scenario possible. All our sacrifices would count for nothing.

'And we simply can't allow that to happen.'

Professor Collignon earlier on Monday said Victoria's strategy to eliminate COVID-19 is 'not sustainable' and unlikely to be achieved in the timeline set down by the state Premier.

Victorians have been cooped up since July 8 after a surge in coronavirus cases and only permitted to leave their homes for essential reasons like grocery shopping, health appointments, work and exercise. 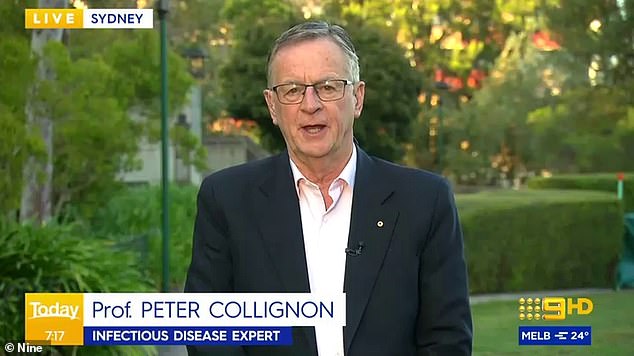 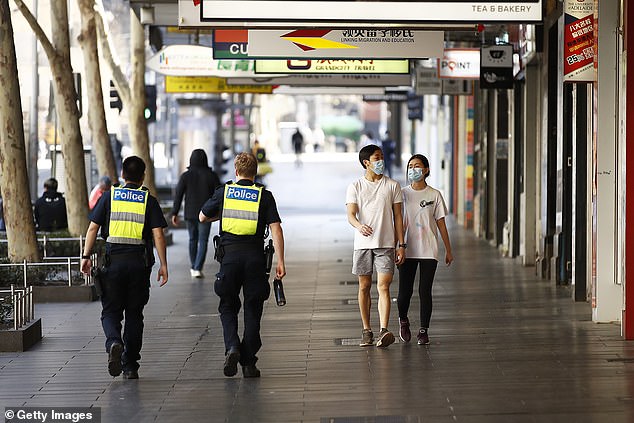 According to Professor Collignon, there are two main reasons why the ambitious plan to get community transmission down to zero before fully reopening is flawed.

'It's much harder than any other state has tried and secondly, a lot hinges on very good contact tracing and so far Victoria has not been able to do it as good as other states,' he told the Today show.

'They still don't have quick contact tracing and there is a lot of undefined cases where they don't know where they came from.'

Professor said that internationally, tougher restrictions have not necessarily resulted in better outcomes. 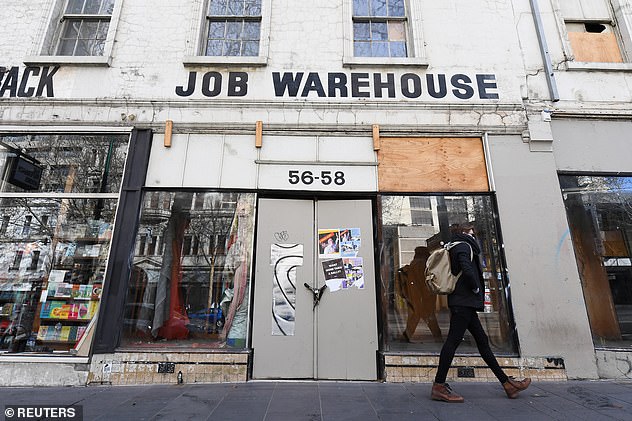 Places like California, Spain and New Zealand all enforced very strict lockdowns in an attempt to fully eliminate COVID-19, but later suffered a second wave of cases.

'Nobody has achieved that except Taiwan. New Zealand tried but it didn't work. It came back and that is almost inevitable over the next few years unless we have a vaccine that is 90 percent effective,' he said.

Mr Andrews' road map out of lockdown involves a four-step plan for the state to return to normality if case numbers continue to fall.

Under the plan, long-suffering