Military helicopters tried unsuccessfully to rescue around 50 people trapped by wildfires in California on Monday night, but were beaten back by heavy smoke.

The group of hikers and campers remain trapped by Lake Edison, 250 miles east of San Francisco in the Sierra National Forest.

At least one person has died, said Fresno Fire Battalion Chief Tony Escobedo, and warned there may be multiple casualties.

'Another effort will be made shortly to evacuate the trapped people in Lake Edison and China Peak using night vision.'

Monday's frantic rescue attempt came as wildfires blazed across swathes of the western United States on Monday night, destroying homes and devastating forests and grasslands, as record high temperatures and strong winds made the task of fire fighters even more challenging. 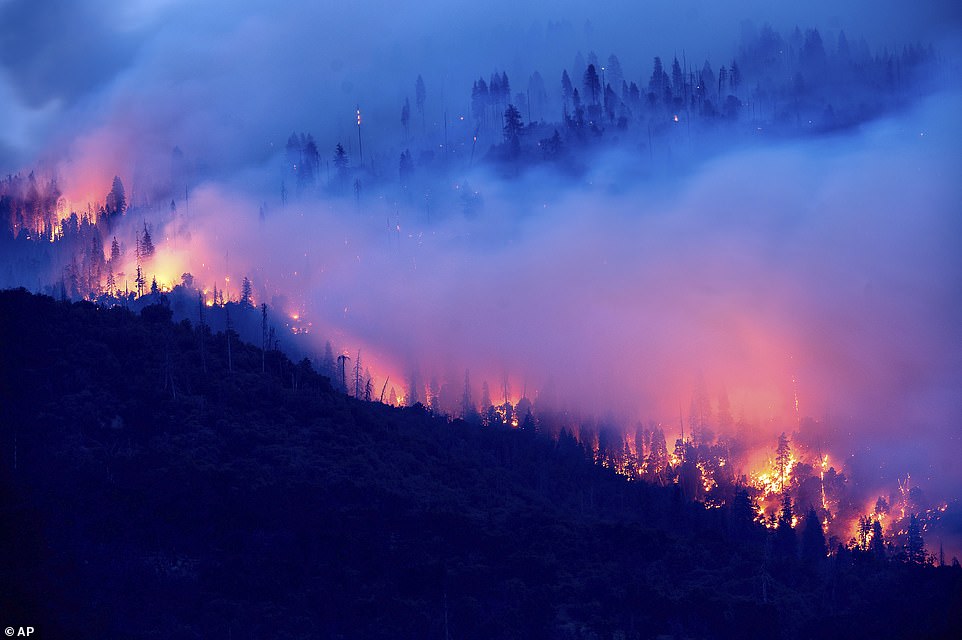 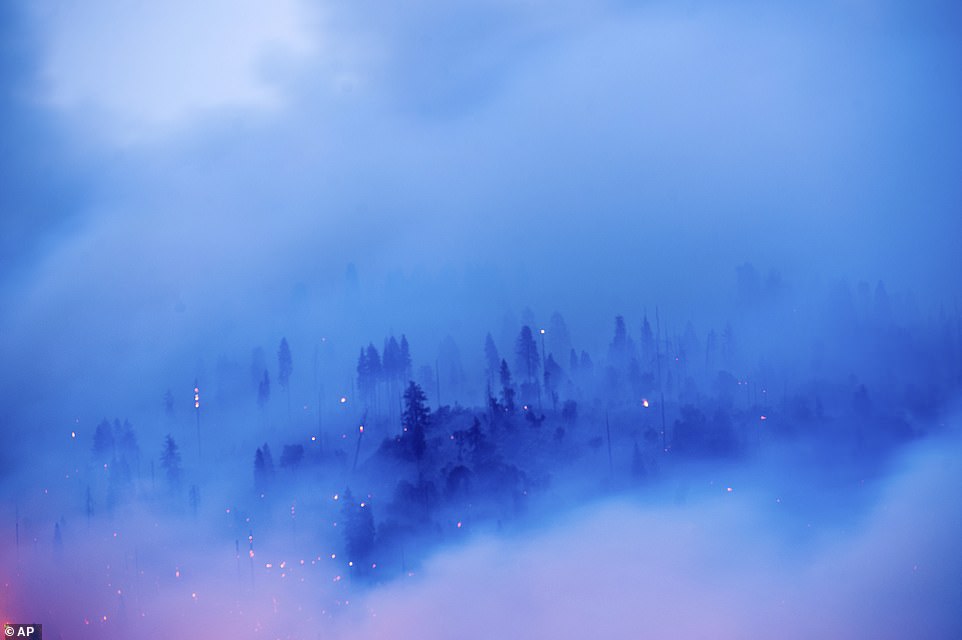 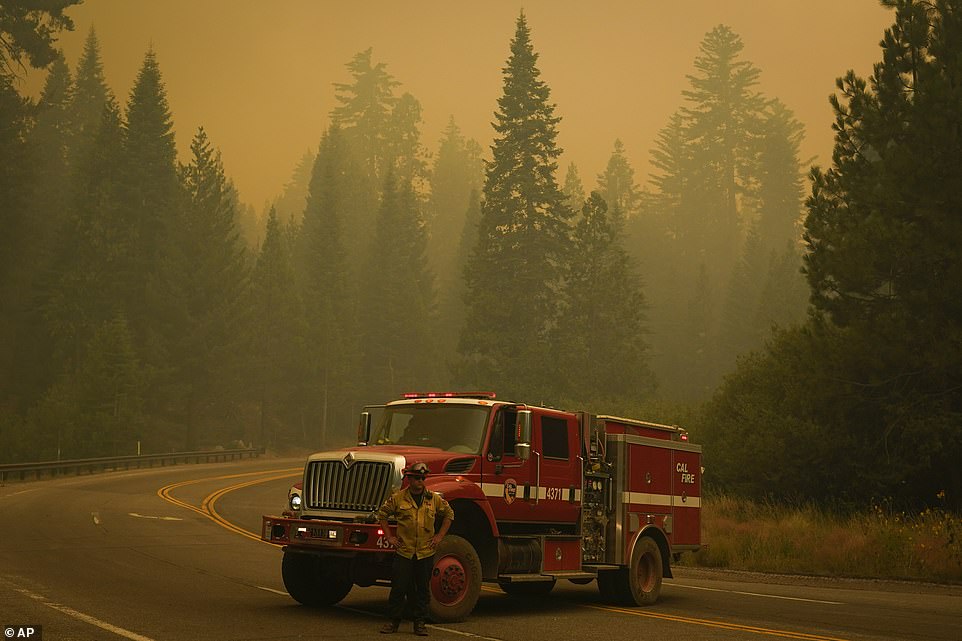 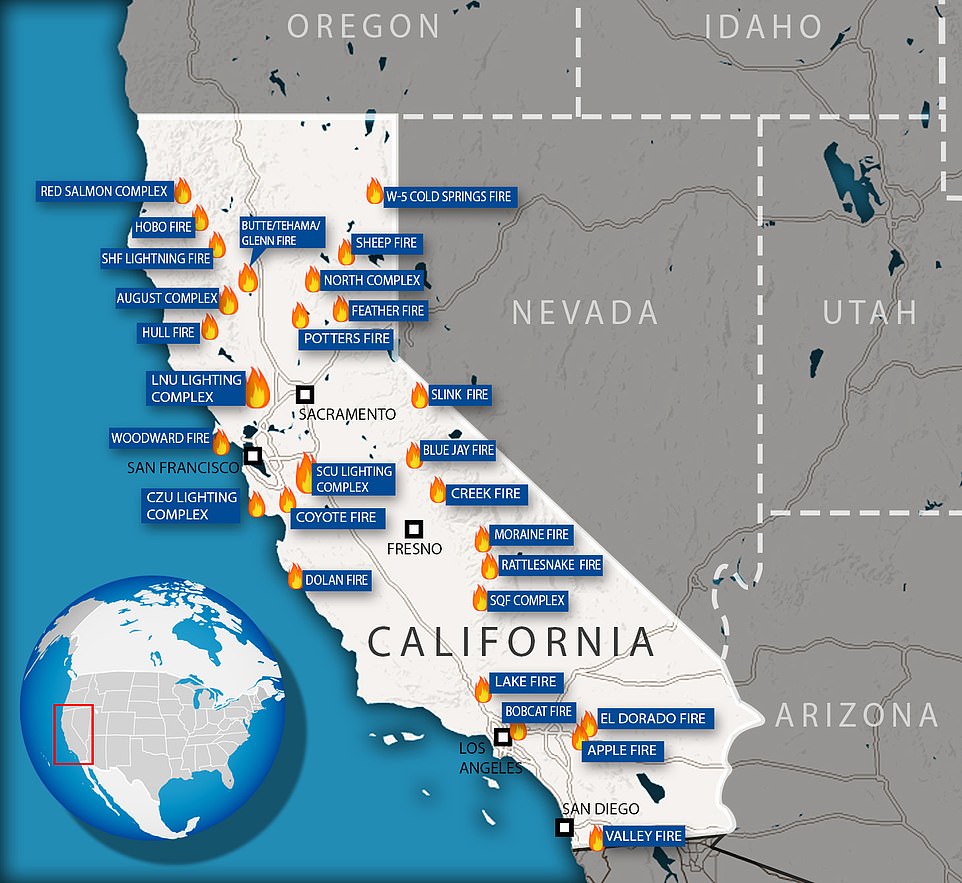 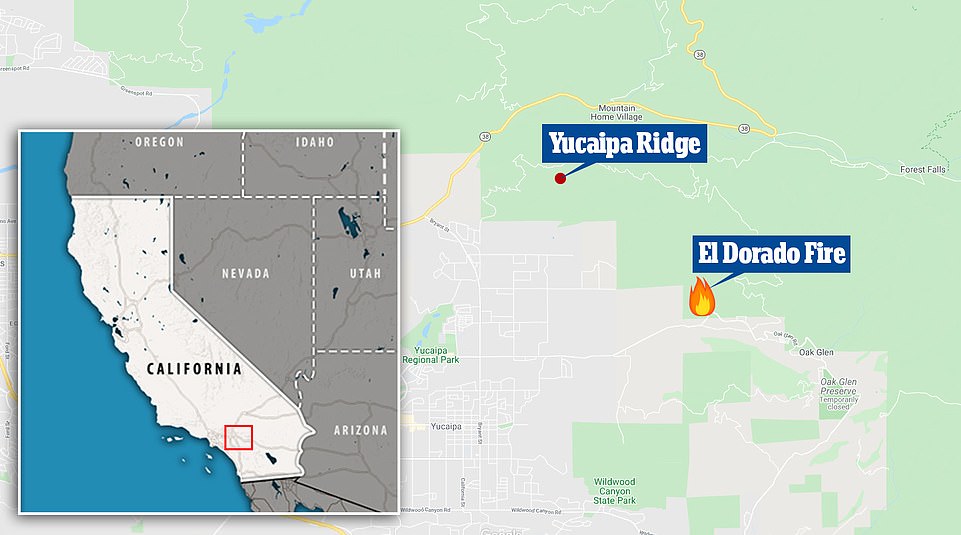 The fire spread from the El Dorado Ranch Park north, onto the Yucaipa Ridge and into the San Bernardino National Forest

In Washington state, a small town of 300 people saw 80 per cent of the homes destroyed.

And in Oregon and Idaho, fires close to power lines shut off the electricity, adding to the misery amid the heatwave.

The governor of California, Gavin Newsom, on Sunday night declared a state of emergency as his hard-hit state struggled to beat back the blazes.

Among the most devastating fires was one in northern California, caused by lightning, which was burning through Napa, Sonoma, Lake, Yolo and Solano counties.

The LNU Lightning Complex began on August 17 and has so far burnt 375,209 acres, killing four people. The fire is now 91 per cent contained.

Among the most dramatic on Monday was the Creek Fire, which was first sparked on Friday evening and quickly exploded to 135,523 acres - doubling in size again within a day.

The Creek Fire - which trapped the Lake Edison campers - currently has 0 per cent containment, Cal Fire said, and is being fought by almost 1,000 fire fighters.

The fire is located near the communities of Shaver Lake, Big Creek and Huntington Lake.

Over the weekend the Creek Fire trapped a further 214 people, who had to be rescued by helicopter after the roads were blocked.

Starting on Saturday night lasting into Sunday morning, a Black Hawk helicopter and a large Chinook helicopter flew the 214 people to the National Guard base at the Fresno Yosemite International Airport.

The two aircrafts conducted three lifts from the Mammoth Pool Reservoir along the Fresno/Madera County border, the National Guard said.

Once at the base, emergency medical workers helped triage and take the injured to local hospitals, including Community Regional Medical Center (CRMC).

Twenty of them were to nearby hospitals and six are in CRMC's burn unit, EMS officials told Action News. 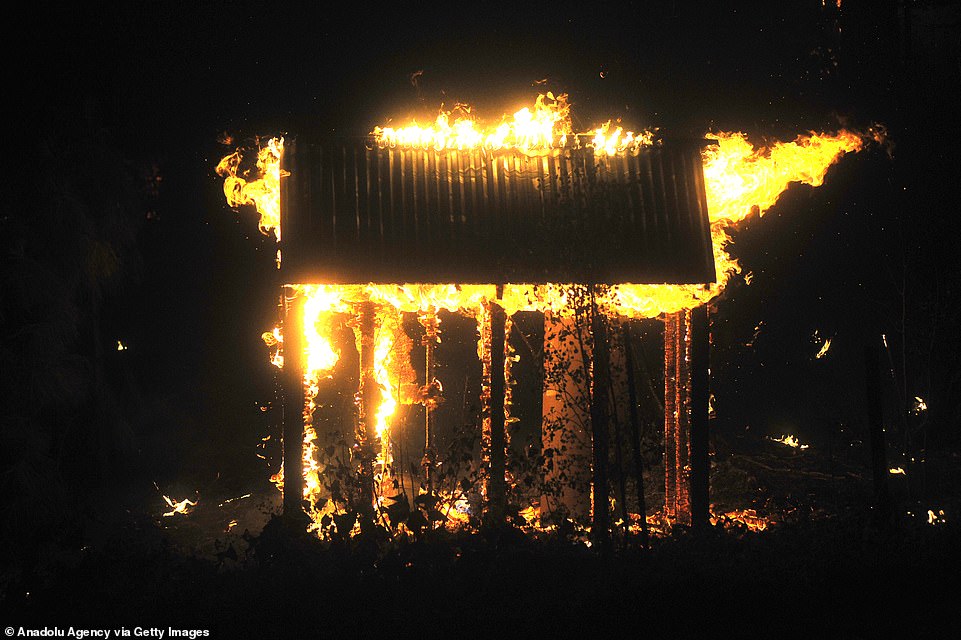 Chris Donnelly, the longtime chief of the volunteer fire department in the nearby town of Huntington Lake, said three propane tanks totaling 11,000 gallons exploded, and an elementary school also caught fire - although it wasn't clear whether it burned.

The school's superintendent, Toby Wait, told The Fresno Bee that a church, a library and a historic general store appear to have survived the fire, although Wait's home burned after his family was evacuated early Saturday.

'Words cannot even begin to describe the devastation of this community,' he told the newspaper. 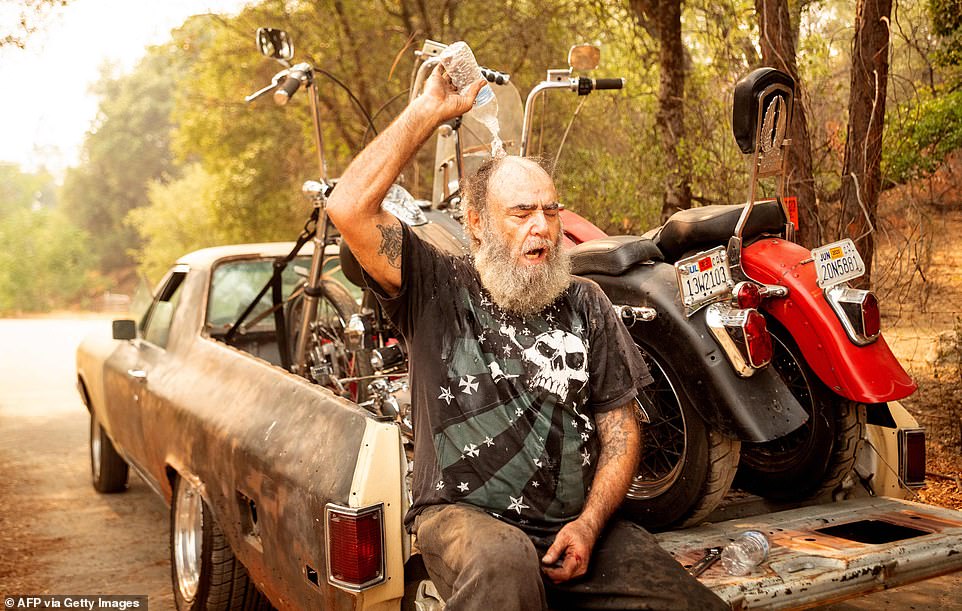 Jim Smart is among thousands of people to be evacuated from their homes as wildfires rage across the western U.S. 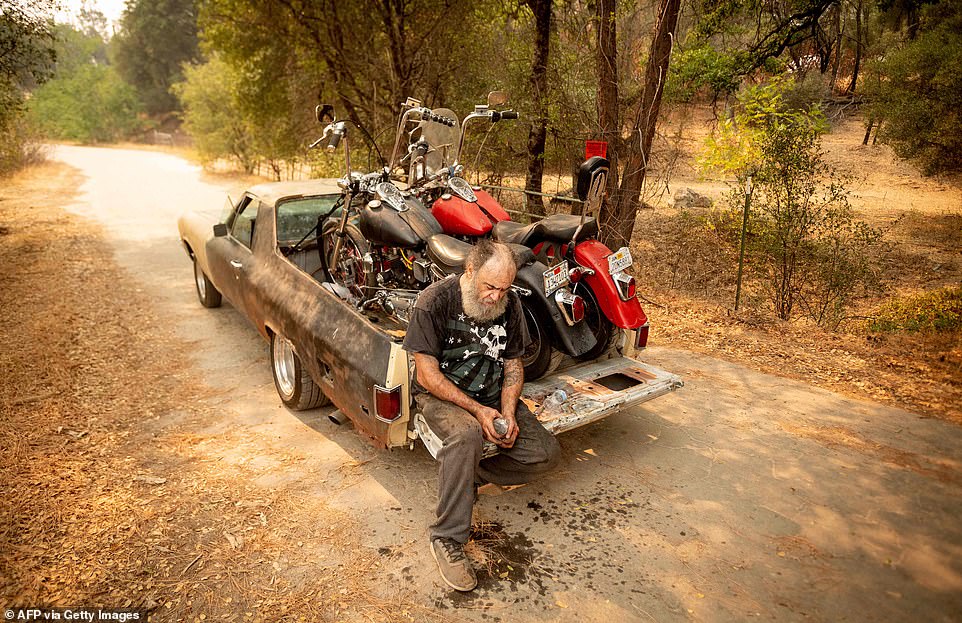 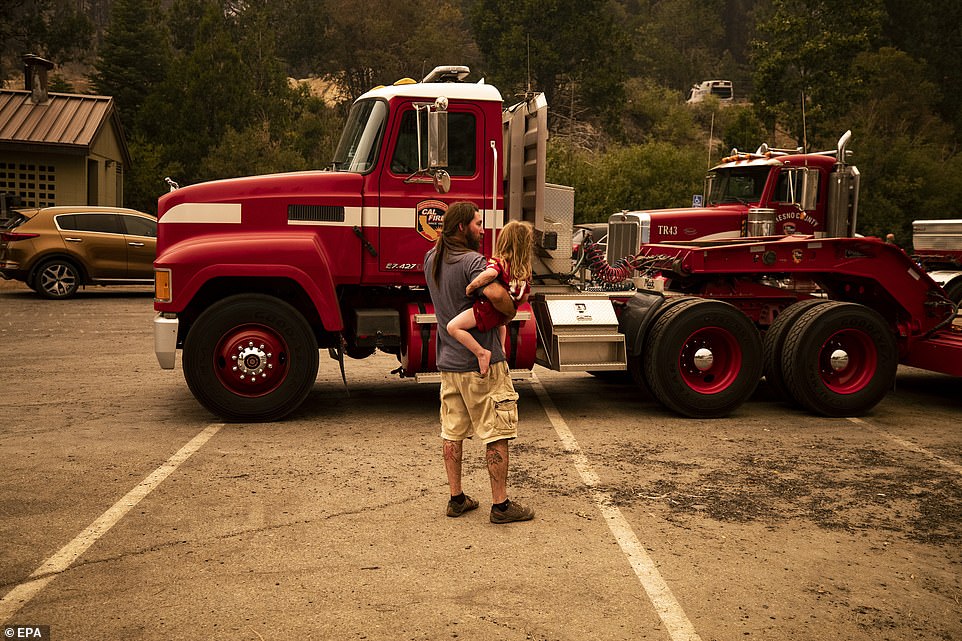