Confusion surrounded the whereabouts of a 'kidnapped' Belarus opposition leader today after border guards claimed she was arrested while trying to reach Ukraine.

Maria Kolesnikova was stopped at the Aleksandrovka border crossing in the early hours of this morning, authorities claim, in what Belarus called an 'illegal' attempt to flee the country.

Border police made the extraordinary claim that Kolesnikova was 'pushed out' of a speeding BMW as it raced to escape the guards, but two of her opposition allies made it into Ukraine.

However, an alternative account in Ukrainian media said that Belarus had been trying to deport her - with Kolesnikova thwarting the attempt by tearing up her passport.

Friends of the 38-year-old had been unable to contact her after she was allegedly snatched by masked men who bundled her into a van on Monday, a claim which Belarus denies.

Kolesnikova is part of a female triumvirate challenging the rule of 'Europe's last dictator' Alexander Lukashenko, but was the only one who remained in Belarus after last month's disputed election led to a crackdown in the ex-Soviet country. 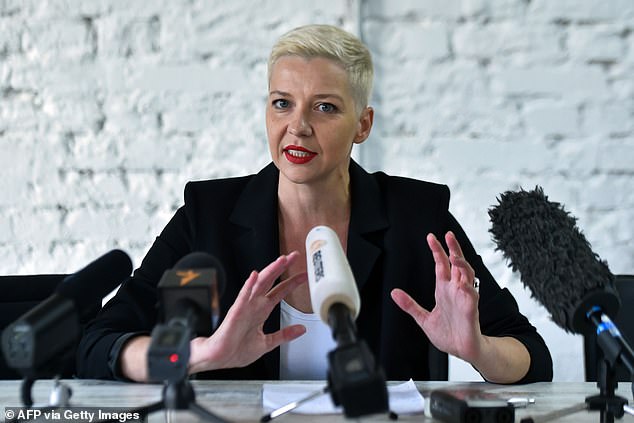 Maria Kolesnikova (pictured) was arrested at the Ukrainian border this morning, state television said a day after she was allegedly kidnapped in Minsk

'However, as they saw border guards, the car abruptly picked up speed, which posed a threat to the life of a border guard.

'Kolesnikova appeared outside the vehicle. In fact, she was pushed out of the vehicle that kept moving towards Ukraine.'

The Ukrainian embassy in Minsk confirmed that Rodnenkov and Kravtsov were able to cross into the country.

However, Ukrainian border guards denied initial claims that Kolesnikova had entered the country and the circumstances of the journey were not clear.

An 'informed source' gave a different version of the story to Interfax Ukraine - saying she had foiled Belarus's attempt to deport her.

'When attempting to deport her, she tore her passport and could not be allowed into the territory of Ukraine by border guards,' the source said.

Britain and Germany were last night demanding answers on Kolesnikova's whereabouts after she and the two others went missing on Monday.

PREV Teenage Covid-19 patient 'is raped by paramedic while being taken to hospital' ...
NEXT Four Navy aircrew parachute to safety moments before E-2C Hawkeye plane crashes ...