De Blasio in denial: Mayor says Labor Day weekend was 'overwhelmingly peaceful' despite gun arrests hitting a 25 year high and 37 shootings on Monday alone including the broad daylight murder of dog walker, 62 De Blasio claimed on Tuesday morning that the weekend had been 'overwhelmingly peaceful'  Gun arrests were 160 last week - a 25 year high - and there have been more than 1,000 shootings in New York City this year already  That is an increase of 87 percent from last year  On Monday morning, Michael Scully, 62, was shot dead while walking his dogs in Bay Ridge - his murder remains unsolved  A six-year-old boy was shot at a Caribbean festival; a 25-year-old man was shot dead in the head while in the car next to his wife in Queens at 1am on Sunday  De Blasio has long been criticized for his response to crime In June, he took $1billion from the NYPD's budget amid pressure from BLM protesters He has also controversially released thousands of people from jail early 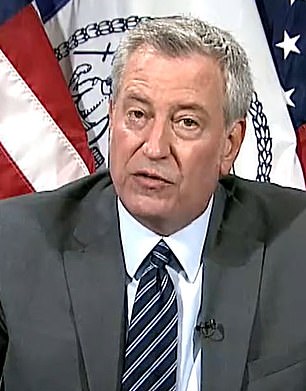 Bill de Blasio praised New York City for what he claimed was an 'overwhelmingly peaceful' Labor Day weekend despite gun arrests reaching a 25 year high last week and although there were 37 shootings on Labor Day alone, including the murder of a 62-year-old dog walker in Bay Ridge.

There were 160 gun arrests the week ending September 6, Commissioner Dermot Sea said during an interview on Tuesday morning.

On Monday, there were 37 alone.

By the end of August, there had been 1,004 shootings in New York City - more than double nearly double the 537 there were last year.

It’s unclear what the motive was but it is believed the man was caught in a hail of bullets and may not necessarily have been the target.

The woman reported it to police.