Bearly any hair! Panda develops bald patches because of all its rolling around Three-year-old panda Fuxing was filmed walking around with bald batches  The male bear at Beijing Zoo began to lose hair in July, according to visitors A zoo spokesperson claimed the bear rolled too much, causing the hair loss

By Billie Thomson For Mailonline

A panda in China has developed two bald patches on its head because it rolled around too much, according to a zoo.

Footage of three-year-old Fuxing walking in his enclosure with parts of his skin exposed has caused an outcry on the nation's social media outlets.

The zoo told reporters that the bear's hair loss was caused by the fact that the 'active' animal rolled on the ground 'frequently'. 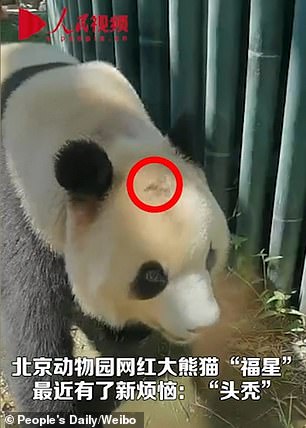 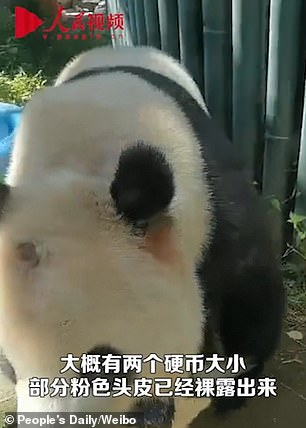 Footage released by state media shows three-year-old Fuxing walking in his enclosure at Beijing zoo with two bald patches on his head. The zoo said Fuxing was 'particularly active'

Footage released by Chinese state-run newspaper People's Daily shows the male panda walking in his enclosure with part of the skin uncovered by fur.

A report from Beijing Youth Daily said that Fuxing began to lose hair in late July, and the bald patches appeared in August.

Pictures and videos of the bear led to heated discussions on Chinese social media outlets, with many panda fans speculating the cause of