Dramatic video shows Florida man fleeing from authorities on his JET SKI as officers in three boats trail behind during high-speed water chase  Officers from the Florida Fish and Wildlife Conservation Commission pulled over the man on his jetski for a manatee zone infraction He subsequently sped off from the scene on his watercraft, prompting the FWC officials to give chase in their boats The suspect ditched his jetski at the shore, before he attempted to flee on foot  He was eventually nabbed by police in Hallandale Beach and is now facing charges of resisting arrest and fleeing and eluding Officers learned he was also wanted by U.S. Marshals for a federal parole violation 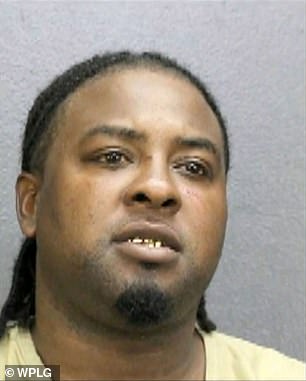 Dramatic video shows a Florida man fleeing from authorities on his jet ski.

The high-speed chase occurred Monday evening in the waters off Miami, and eventually ended in the arrest of the suspect, later identified as Eric Tukes.

Officers from the Florida Fish and Wildlife Conservation Commission first stopped Tukes in the water around 8pm due to a manatee zone infraction, according to Local 10.

Tukes then sped off on his jet ski, prompting the officers to give chase in their