Australia was plunged into strict lockdown at the beginning of the COVID-19 pandemic based on incorrect figures and a massive over-estimation of how many patients would require ICU treatment.

Research by The Peter Doherty Institute had estimated a peak daily demand of 35,000 intensive care beds would be required in the scenario of an uncontrolled outbreak in Australia.

But the modelling had confused ICU admissions with the number of people who would need to be taken to hospital during the pandemic.

As a result, New South Wales hospitals were predicted to be hit with 12,000 ICU patients rather than the 3,000 admissions the modelling had meant to show. 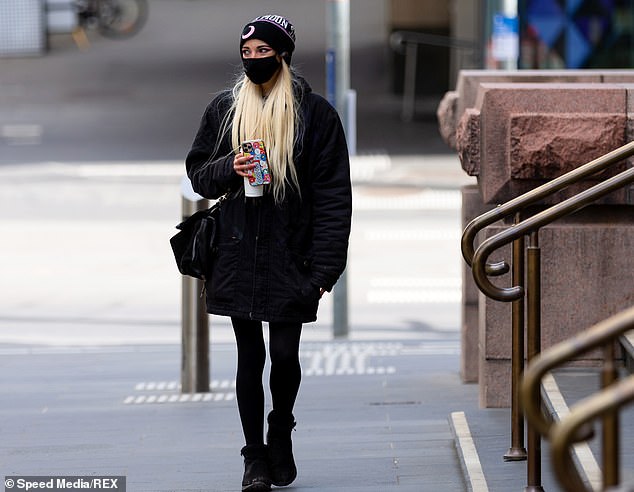 A young woman strolls down an empty Bourke Street Mall in Melbourne on Wednesday. Experts who predicted Australia's ICU demand at the start of the COVID-19 crisis made a critical error in data that guided the nation's response to the pandemic, it has emerged 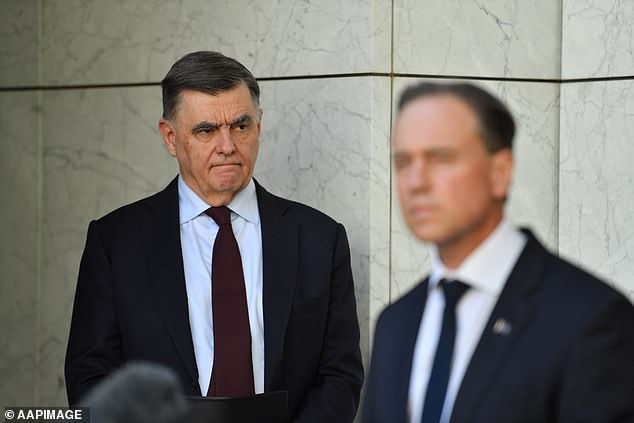 Department for Health Secretary Brendan Murphy pictured in Canberra on Monday. As chief medical officer, Brendan Murphy had cited estimates of a peak daily demand of 35,000 ICU beds during an uncontrolled coronavirus outbreak as 'horrendous'

The data was used by the federal government to justify nationwide business shutdowns, border closures and social distancing restrictions when the virus took hold in Australia in March.

Then-Chief Medical Officer Brendan Murphy said at the time the figures forecast an 'horrendous scenario' with a 'daily demand for new intensive care beds of 35,000-plus'.

He said such a demand would be 'completely beyond the realm of any country to create'.

The Doherty Institute's Professor Jodie McVernon said the modelling mistake - which was published in April - was noticed in June and the government was notified, The Daily Telegraph reported.

Disease modelling experts at James Cook University in Queensland noticed the error when they discovered a large discrepancy in predicted ICU admissions between different parts of Australia.

James Cook University infectious diseases physician Emma McBryde claimed her researchers had told the Doherty Institute of the mistake and the organisation said the error would be corrected. 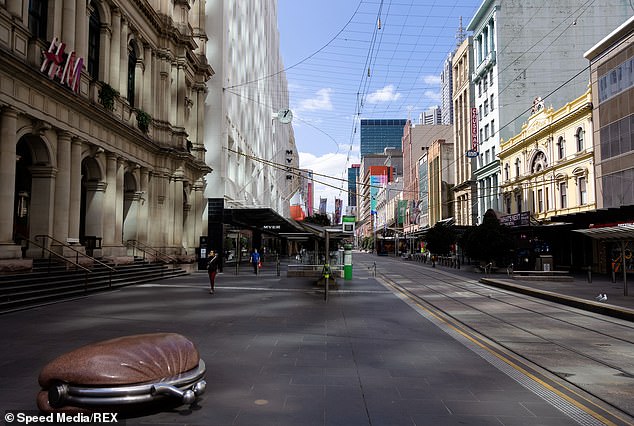 The modelling though had confused ICU admissions with the number of people who would need to be taken to hospital during the pandemic. Pictured a near-deserted Bourke Street Mall on Wednesday 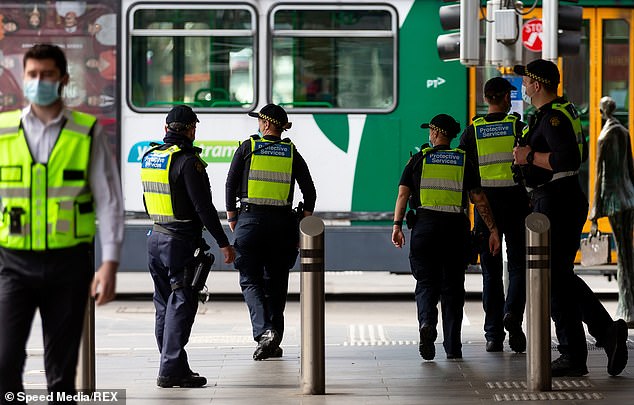 But she claimed no revision had been made three months later.

'Leaving something inaccurate uncorrected on the public record is pretty close to research misconduct,' she said.

'I strongly believe we lock down too hard.'

Daily Mail Australia has contacted the Doherty Institute for comment.

The revelation comes as Australia's hopes for a coronavirus vaccine were put under threat after trials in the UK were paused over major safety concerns.

Late-stage studies of AstraZenec's vaccine candidate are on hold after a patient became seriously ill on Tuesday.

The company is investigating if the illness, which has not been specified, is a serious side effect or had nothing to do with the shot. 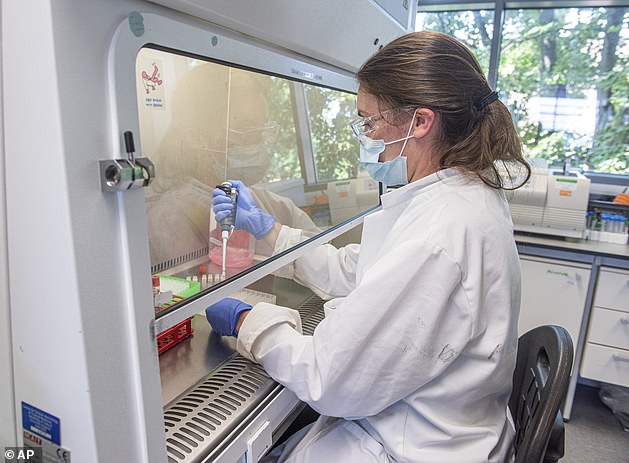 Australia's hopes for a coronavirus vaccine are under threat after trials in the UK were paused over safety concerns. Pictured: A scientist works on the vaccine at Oxford University 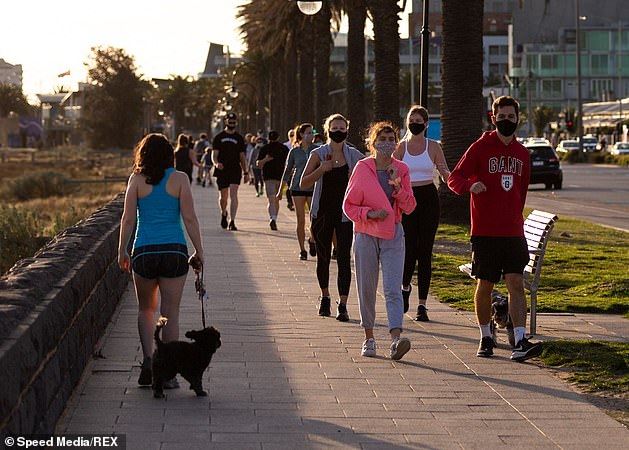 The federal and state governments have repeatedly said we will have to live with the virus until a vaccine is rolled out.

But the jab being developed at Oxford University is the only overseas candidate that Australia has agreed to buy while other developed countries have signed several deals.

Prime Minister Scott Morrison has come under fire for 'putting all of Australia's eggs in one basket'. 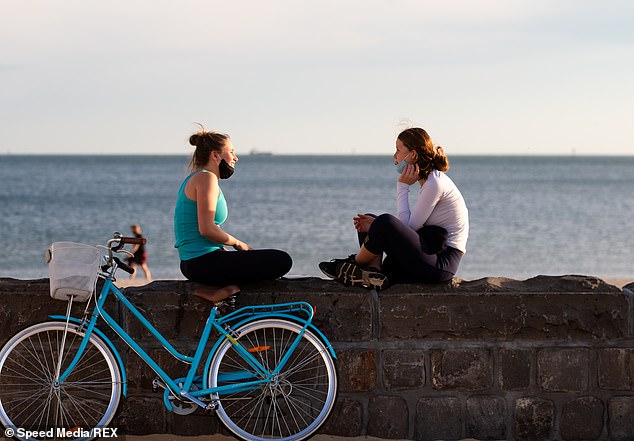 He pointed out that 18 countries have signed 51 deals to buy various vaccine candidates. The US has six and the UK has five.

Australia has also agreed to buy a vaccine being developed at the University of Queensland - but it only started human trials in July.

There are 37 vaccines in human trials around the world and Australia is trying to buy more of them.

Victoria meanwhile recorded another day of double-digit coronavirus infections on Wednesday, with just 76 new cases across the state.

A further 11 deaths have also been announced, taking the state's death toll to 694.

The figures are a marked jump from previous days after the state recorded 55 infections on Tuesday and 41 on Monday - the lowest number in two months.

In order to move to the next step of easing restrictions on September 28, Melbourne must record an average daily infection rate between 30 and 50 over the next two weeks.

Cafes, bars and restaurants will not be able to have customers dine outside until October 26, as long as the statewide