Trump privately said coronavirus 'is deadly stuff' and KNEW it was highly contagious at start of February despite claiming to have it under control - then said 'I like playing it down,' bombshell tapes by Bob Woodward reveal Trump called the coronavirus 'deadly stuff' in interview with Washington Post's Bob Woodward conducted in February He called the virus 'more deadly than even your strenuous flu' Trump told the nation Jan. 30: 'We think we have it very well under control On day he spoke to Woodward Trump said China's president 'will be successful, especially as the weather starts to warm & the virus hopefully becomes weaker, and then gone' Excerpts are from Woodward's new book, 'Rage'

President Donald Trump spoke privately about the deadly nature of the coronavirus in recorded interviews even as he was publicly downplaying the severity of COVID-19 early this year, before the pandemic would take nearly 200,000 American lives and counting.

The president shared his stark assessment with the Washington Post's Bob Woodward in recorded phone interviews in February, as the virus was spreading from China to other parts of the world.

'This is deadly stuff,' the president told the Watergate reporter, Washington fixture and author who has interviewed U.S. presidents going back to Nixon. 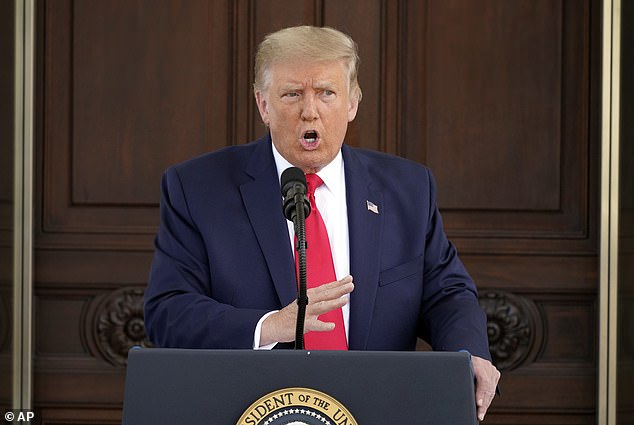 'This is deadly stuff,' President Donald Trump told Bob Woodward in a Feb. 7th call where they discussed the coronavirus

'You just breathe the air and that's how it's passed,' Trump told him in a Feb. 7 call. 'And so that's a very tricky one. That's a very delicate one. It's also more deadly than even your strenuous flu.'

Trump had been briefed on the virus in the Oval Office Jan. 28th, as Washington Post excerpts describe.

National Security Advisor Robert O'Brien warned him: 'This will be the biggest national security threat you face in your presidency,' according to Woodward.

O'Brien's deputy, Matthew Pottinger, warned the threat was akin to the 1918 flu pandemic,

PREV Policewoman and married officer sacked over secret sex flings while they were ...
NEXT Four Navy aircrew parachute to safety moments before E-2C Hawkeye plane crashes ...