Bison is seen struggling to walk in September snowstorm as cold snap sweeps Rocky Mountains just days after record-breaking heatwave Snow is continuing to fall in parts of the Midwest after a cold snap moved through on Labor Day, causing temperatures to plummet by up to 60 degrees  Bison in both Yellowstone National Park and Evergreen, Colorado were seen struggling amid thick snowfall Over the weekend, parts of Colorado experienced wildfires and record-breaking heat before the cold weather moved in  Residents in Denver saw smoke from the fires replaced by snowfall in less than 24 hours

Winter has arrived early in the Midwest, with September snowstorms causing temperatures to plunge by more than 60 degrees in some regions.

Up to 17 feet of snow fell in mountainous areas of Wyoming on Labor Day - which marks the unofficial end of summer.

Snow also fell in nearby Yellowstone National Park, with a bison seen battling against sleet and icy winds in one video shared on social media.

'Labor Day in Yellowstone. Surely this bison is a metaphor for something in 2020,' Twitter user Chris Frink wrote beneath the short clip. 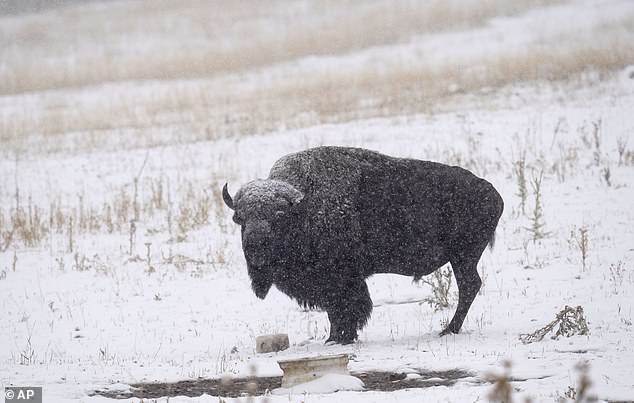 Winter has arrived early in the Midwest, with a September snowstorm causing temperatures to plunge by more than 60 degrees in some regions.  Pictured: a bison shivering in Evergreen, Colorado on Tuesday

The snow forced the closure of Yellowstone's east entrance on Monday, which still remains blocked off to the public.

The Montana town of Red Lodge, which lays close to Yellowstone recorded a 10.5 inches of snow.