Australians could be spared from having to bail out Victoria financially if its lockdowns continue thanks to a little known tax rule.

Victoria, Australia's second biggest state by population, receives $17.7billion a year from the Commonwealth's GST collections, which is paid for by ordinary people across the country.

That equates to about a quarter of the $69billion raised annually from the ten per cent Goods and Services Tax, which is added to shopping bills.

The Institute of Public Affairs, a free market think tank, calculated the Stage Four lockdowns in Melbourne were costing the Victorian economy $3.17billion a week. 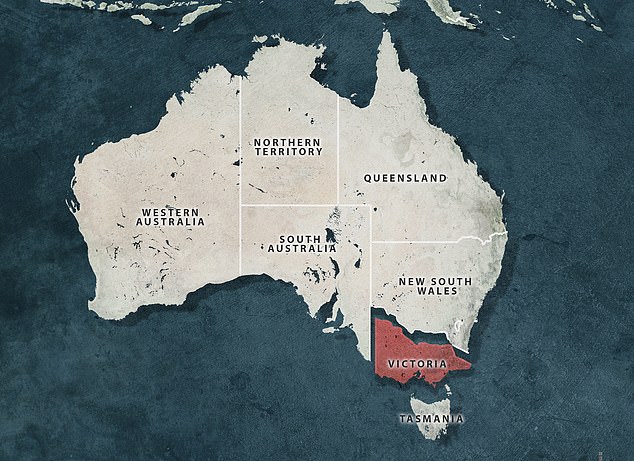 Australians could be spared from having to bail out Victoria financially if its lockdowns continue thanks to a little known old tax rule. Victoria, Australia's second biggest state by population, receives $17.7billion a year from the Commonwealth's GST collections

The IPA estimated 696,000 Victorian jobs would be lost between March and November.

What Victoria receives from YOUR GST

Victoria has allocated $17.7billion from the Commonwealth Grants Commission in 2019

That equated to 25.7 per cent of the $69billion distributed to the states and territories from GST revenue

Victoria received 98.3 cents for every dollar of the GST collected in the state compared with 87 cents for New South Wales and 51.8 cents for Western Australia

Victoria's Labor Premier Daniel Andrews on Sunday declared the lockdowns would not be eased until the state recorded fewer than five new daily cases on average by late October.

With New South Wales and Queensland even failing to reach that benchmark, the IPA's director of research Daniel Wild wants the federal government to withhold GST funds from Victoria until it scrapped its economically-destructive lockdown.

'All GST payments and grants from the Commonwealth to Victoria should be frozen until the lockdowns in Victoria are lifted,' he told Daily Mail Australia.

'The rest of Australia should not pay for the catastrophic ineptitude of Daniel Andrews.'

Australian Taxpayers' Alliance policy director Emilie Dye said the rest of Australia shouldn't be paying for Victoria's use of the police 'to silence the people'.

'The rest of Australia had no vote in electing the Andrews government; they shouldn't have to foot the bill,' she told Daily Mail Australia.

'The Victorian people are suffering. They are losing their businesses, their livelihoods, and their relationships.

'It's time the state government felt some of the pain suffered by its citizens.'