England and Northern Ireland announced the deaths of nine more people with coronavirus today, while no more have been confirmed in Wales or Scotland.

A full update will be produced later today by the Department of Health, which will include deaths in care homes and also the number of new positive tests.

Fatalities are no longer a big measure of the progress of the outbreak and the attention of politicians and the public has turned to new infections.

These have been rising in recent days to such an extent that Prime Minister Boris Johnson yesterday announced people should start to 'limit social contact' again from Monday.

He confirmed new laws in England will allow police to issue £100 fines to people meeting in groups larger than six as he attempts to cut down on young people gathering.

The new rule, which toughens up the previous one that allowed up to 30 people to gather if from two households, will be applied across the country.

Senior MPs said today that the 'broad brush' approach to tightening the screw across England will mean millions living in almost Covid-free areas must pay the price for some inner cities' inability to keep a lid on infections. 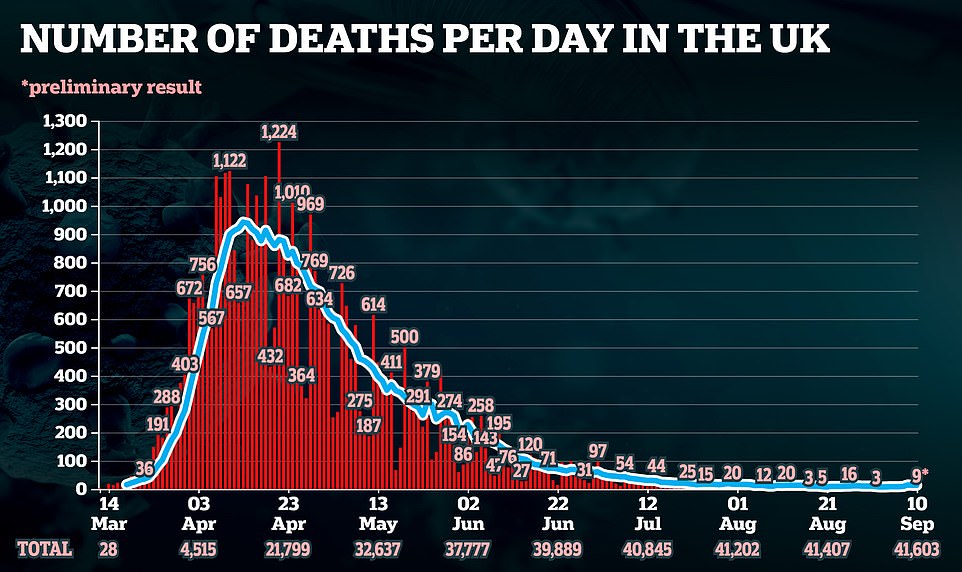 The new deaths reported by NHS England take the total number of in-hospital Covid-19 fatalities to 29,639.

The Prime Minister Boris Johnson yesterday held a now-rare televised press conference and confirmed the new 'rule of six' law that means people will face legal consequences if they gather in groups larger than six.

This rule will apply to any groups of that size meeting anywhere in England, even if outdoors or at a pub.

But the rules, brought in to try and stem a tide of surging infections among young people, will unfairly apply to everyone in the country.

While some areas are seeing seriously concerning spikes in cases of Covid-19 – there are around 30 locations on Public Health England's watchlist – hundreds of local councils have successfully avoided the coronavirus danger.

But at least 38million people in these relatively unaffected areas will still be forced under tighter restrictions.

One Conservative MP said it was unfair to take such a 'broad brush' approach that pulled together people in at-risk inner city areas with those living in the spaced-out countryside.

Local authority data reveals that 65 per cent (210 out of 320) of councils have a rate of coronavirus cases below 20 per 100,000, the level at which the Government considers quarantine measures for foreign countries. 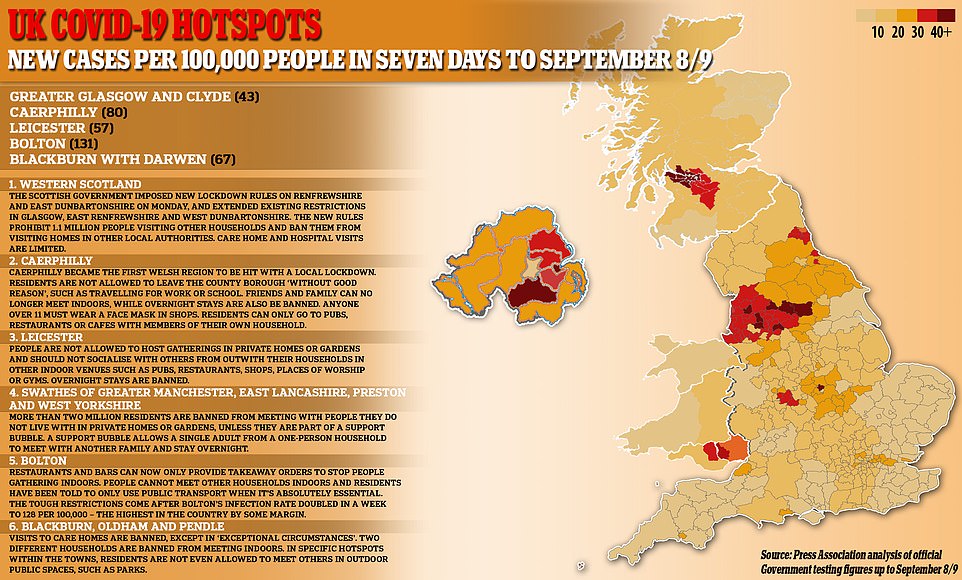 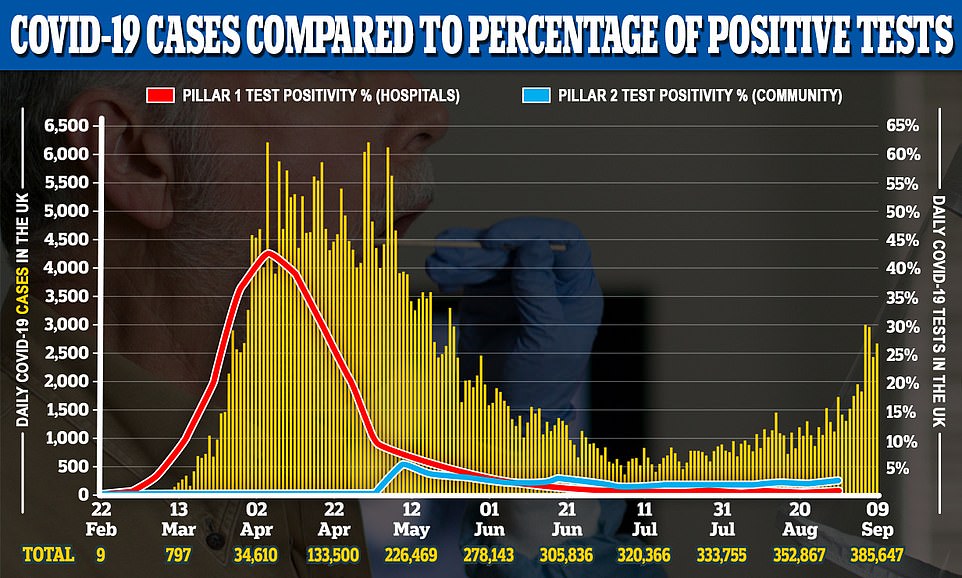 Although cases have risen, the positive test rate - how many people test positive out of all those tested - has not reached levels seen during the pandemic. This gives an indication that some cases are due to more focused testing in hotspots

The UK's coronavirus outbreak is mostly being driven by cases in hotspots including Greater Manchester, Lancashire, Birmingham and Leicester, with many areas in local lockdown measures or receiving extra Government support.

Rural areas in the South West, for example, have escaped the worst of the virus's impact for most of the outbreak but are still being subjected to the tough rules faced by the rest of the country.

Lesser-affected areas include places such as Northumberland and Bishop Auckland in the North, to Weymouth, Ashford and Winchester in the south.

All will be required to ensure people meet in groups no larger than six indoors and outdoors, and subject to fines ranging from £100 to £3,200 if they fail to comply, despite their low numbers of coronavirus cases.

A Conservative former Minister criticised the measures as a 'very broad brush' and said that something 'more concentrated' would have been better.