There's a scene in the classic 1986 Australian film Crocodile Dundee when the title character's wide-eyed American love interest asks if a reptile with a knife stuck in its skull is dead.

It will be a hell of a job convincing the rest of the world Australia is still the home of the larrikin spirit embodied by Hogan as they watch how parts of the country are dealing with COVID-19.

And it will be a hell of a job for a nation in recession for the first time in 29 years to undo the economic and social damage being done by ongoing lockdowns forced on the population by inflexible politicians.

By the time that is done, like Dundee's unfortunate crocodile, Australia as we know it could be dead. 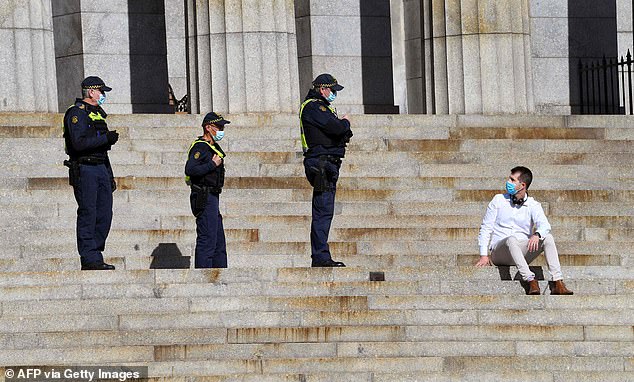 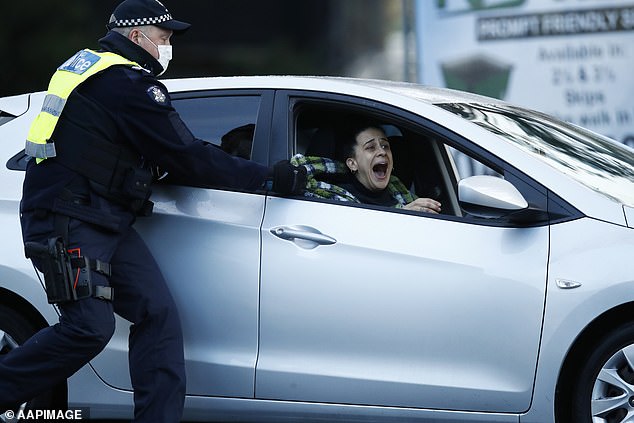 Victoria has some of the harshest COVID-19 restrictions in world. A woman is pictured being approached by police outside public housing towers in Melbourne's Flemington during the coronavirus lockdowns. There is no suggestion she has done anything wrong 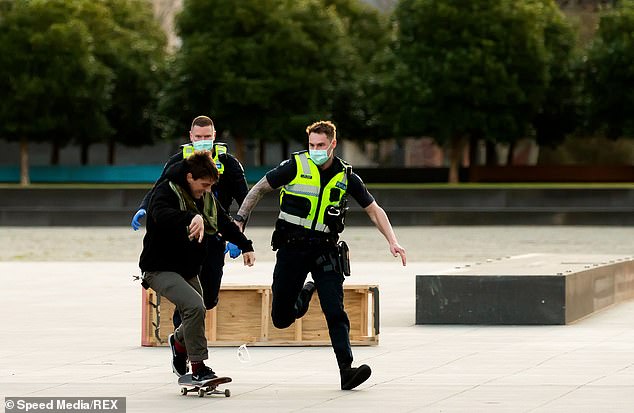 Five million Melburnians are under curfew during the COVID-19 pandemic and are required to wear masks in public. Police are pictured chasing a skateboarder who is not wearing a face mask in Melbourne

Crocodile Dundee may be a work of comical fiction but for plenty of Australians it represents part of how they see themselves - and the current alternative look is seriously confronting.

Rather than throwing another shrimp on the barbie for international visitors as Hoges did in a famous 1980s tourism commercial, the nation is closed to foreigners and some states won't even allow citizens to cross their borders.

Australia has recorded 26,465 coronavirus infections with only 781 deaths and some states have single-digit active cases. But 932,000 jobs have been lost and the federal government is spending $164billion to prop up the economy.

The nation is being crippled while states such as New South Wales - where many residents largely go about their lives as usual - are being held back by those suffering pandemic panic.

Queensland authorities initially refused to let four children living in Sydney visit their dying father and Canberra woman Sarah Caisip, 26, has been banned from attending her father's funeral in Brisbane despite the fact the ACT hasn't recorded any COVID-19 cases in two months. 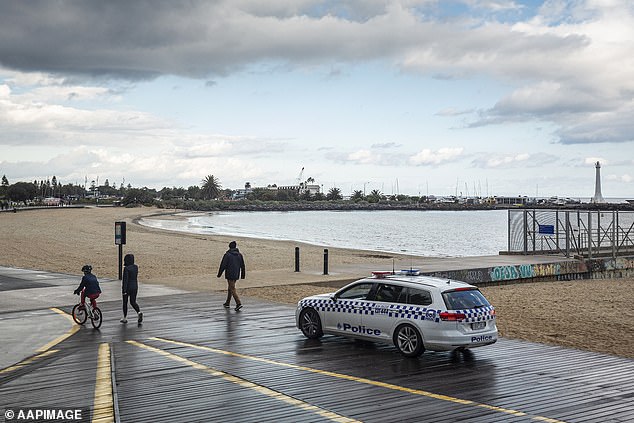 Melbourne is under Stage Four lockdown and its citizens are subject to house spot checks. A police patrol car is pictured passing by St Kilda beach on July 12 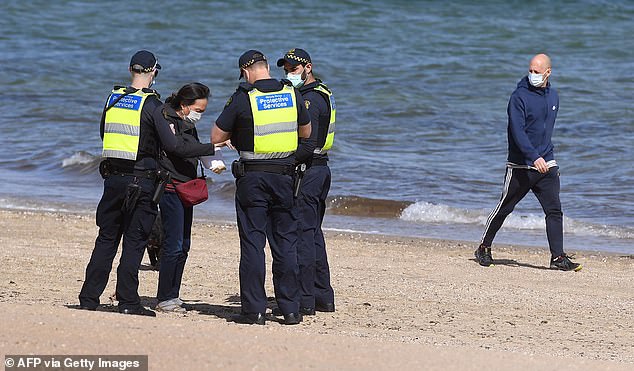 Law enforcement officers speak to a woman on St Kilda beach on September 3. Lockdowns will not be significantly eased until Victoria's new coronavirus cases drop to single digits

Yet last week Premier Annastacia Palaszczuk welcomed 400 football players and officials into the so-called Sunshine State as she announced Brisbane would host the AFL grand final.

In Victoria, which has some of the world's harshest coronavirus restrictions, a pregnant woman was handcuffed in her own home and charged with 'incitement' for allegedly trying to organise a protest.

Melburnians are under a 'Stage Four' lockdown which includes an 8pm to 5am curfew, 5km travel limit for shopping and exercise and children forced to stay home from school for months.

Weddings are banned, the state has adopted the truly Orwellian slogan of 'Staying Apart Keeps Us Together' and police are issuing $1,652 fines for breaking the rules.

Victorian Premier Dan Andrews and his Queensland counterpart Palaszczuk attract the most public anger from citizens who do not live in their states.

But over in Western Australia's Mark McGowan still will not agree to opening his border by Christmas, despite having no community transmission of COVID-19 for five months.

Words not normally associated with Australian government - fascist, authoritarian, totalitarian - are now commonly uttered and Andrews is being called 'Chairman' or 'Dictator' Dan of the People's Republic of Victoria.

Australia was once the envy of the world due to the way it 'flattened the curve' to reduce infection rates at what we now hope was the height of the coronavirus pandemic.

Now the country is a global embarrassment with a people known for their laid-back attitude to life and a healthy anti-authoritarian streak subject to police state conditions including increasingly draconian lockdowns.

Victorians can only leave home for one of four reasons: shopping, exercise, work and care or medical attention.

Every day Victoria Police issues a statement revealing breaches of the chief health officer's directions. On Thursday they issued 139 fines.

Twenty three were for not wearing a mask after leaving home for one of the four approved reasons, 28 per were at vehicle checkpoints and 46 for curfew breaches.

This week The American Conservative website published a piece on Victoria's plight by Gideon Rozner, the director of policy at Australia's Institute of Public Affairs.

Headlined 'COVID Dystopia Comes To Melbourne' it was illustrated by a powerful image of three uniformed law enforcement officers interrogating a man sitting peacefully on the steps of Melbourne's Shrine of Remembrance.

Rozner described how a once-relaxed Australia had succumbed to 'public health tyranny' in a matter of six months.

'The most remarkable thing, though, is it's taken until now for some sort of protest movement to emerge,' he wrote.

'When the coronavirus first hit, the premiers governing Australia's eight states and territories descended into a kind of unspoken competition to see who could take the "toughest action" against the virus.

'That is, which leader could close the most businesses, destroy the most jobs, and stifle the most liberties in the name of being seen to be "doing something" about the virus.'

And according to Rozner, Andrews had won that