The Fort Hood soldier accused of killing Vanessa Guillen escaped a guard when he read news reports that her remains were found, got a gun, and killed himself in a police chase, it has been revealed.

The embattled Killeen, Texas Army base fell into the national spotlight in April with the disappearance of 20-year-old Specialist Guillen, who told her family she was being sexually assaulted at the base by a superior.

She was allegedly killed in an arms room by fellow soldier Spc. Aaron Robinson on April 22, who was ranked above her at the time.

He allegedly killed Guillen with a hammer, picked up his girlfriend Cecily Aguilar and they dismembered and buried her remains near the Leon River in Belton.

Officials say excessive news coverage of the discovery of Guillen’s remains 'tipped' Robinson off to flee as read the updates on his phone. 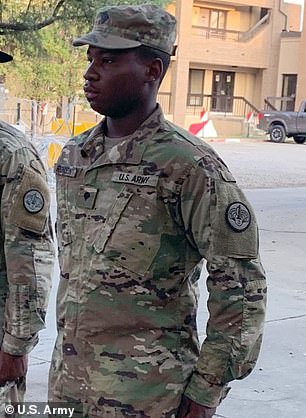 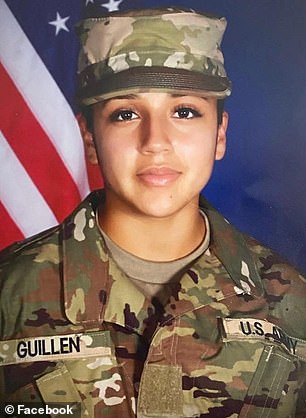 Vanessa Guillen's (right) accused killer Spc. Aaron Robinson, 20, (left) escaped a guard when he read news reports that her remains were found, got a gun, and killed himself in a police chase, Army officials reveal

The drawn out investigation into Guillen took so long because Robinson, at first, had an alibi.

Though he was the last person to see her alive, three soldiers saw Guillen when they smoked outside the arms room by a nearby tree the day she vanished.

The testimony of those three soldiers threw off the investigation for an entire month, Maj. Gen. Donna Martin, the Army’s provost marshal, who leads the Army’s Criminal Investigation Command, said to ABC's 20/20 in a new special.

They said they saw her leave at 'a time that would’ve indicated she had left Spc. Robinson’s arms room.'

'They filled out affidavits that said they had seen Vanessa at a different time from when she had actually departed the other arms room,' Army Secretary Ryan McCarthy said to the show.

'So that gave … essentially an instant alibi for Spc. Robinson, even though they had not really known the correct time of when she had actually departed and headed to the parking lot,' McCarthy said..

'The trail went cold for about a month,' he added.

Robinson spoke with investigators several times and they found he had called his girlfriend Aguilar multiple times the night Guillen disappeared.

This raised suspicion because he initially told investigators he had been with Aguilar all night.

Aguilar also changed her story, claiming she and Robinson went on a drive to look at the stars that night, according to court documents.

On June 30 investigators found remains near the Leon River that were later identified as Guillen.

That same day Robinson was placed in a room under the watch of an unarmed escort, as investigators grew suspicious of his involvement in Guillen’s death.

His phone pinged late at night in the same area where Guillen’s remains and his alibi unraveled. 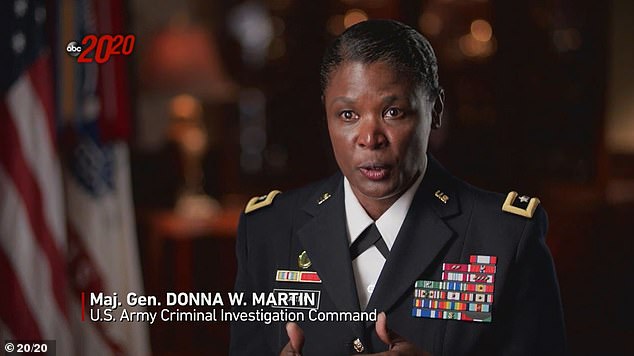 'The media broadcast was really kind of what we believe to be the tipping point for Spc. Robinson to flee,' Maj. Gen. Donna Martin, the Army’s provost marshal, who leads the Army’s Criminal Investigation Command, said. She added an investigation found Robinson did not sexually harass Guillen 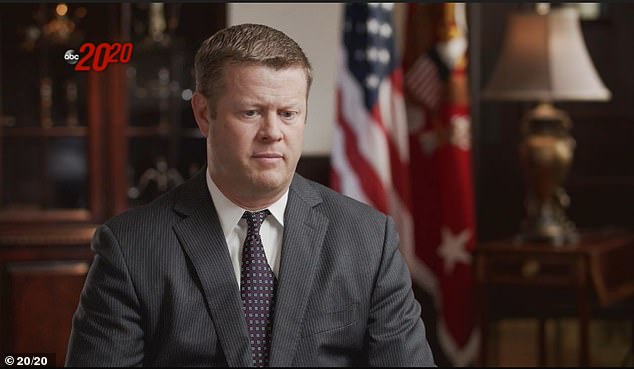 Army Secretary McCarthy says he doesn't know if there will ever be justice for Guillen, but 'it's clear' the Army let Guillen's family down. 'We have to find answers and we will hold people accountable,' he said to 20/20

He wasn’t officially detained but was under the watch of a guard, Army officials say, and was able to get away.

'He was not in police custody because of [how] the legal process works,' Martin explained.

He managed to escape and his escort chased him as he ran from the base.

'He gets in a vehicle and he flees and he leaves Fort Hood,' Martin said, though it’s not clear how he was able to access a car.

As they closed in he shot himself.

Army officials are not revealing when or where he got the gun but Martin said the 'firearm, I can tell you, was not a government weapon. So he did not get it from his arms room.'

Martin blamed his escape on news coverage of Guillen’s remains for 'tipping' him off, as he read about the investigation's developments on his phone.

'All of this is unfolding at the same exact time… What we didn't maybe expect was the media broadcast,' Martin said.

PREV Gallery: The best photos from around the world mogaznewsen
NEXT China forces 500,000 Tibetans into labour camps mogaznewsen