topless Extinction Rebellion (XR) activists were hauled away by police after padlocking themselves to the gates of Parliament with a banner reading 'Can't Bare the Truth?' today on the final day of climate change protest.

Around 30 women gathered in central London wearing just face masks branded with '4C' and trousers, and joined hands as they chained themselves to the black railings surrounding the Palace of Westminster.

The women used D-locks to chain themselves by the neck to the railings at 9.30am on the final day of the XR protests in the capital.

The Metropolitan Police moved in around noon and began removing the woman. A spokesperson for the Met said they could not confirm the number of women arrested during the protest.

Photos show the XR activists holding banners that read 'Can't Bare the Truth?' before they were hauled away by Metropolitan Police officers in yellow high-vis jackets, face masks and blue caps.

XR tweeted in response to today's demonstration: The forces of the state mobilise to crush dissent & protect the interests of the powerful, mothers & babies step up to defend the truth. We are in a #ClimateEmergency.

'We face a 4C increase in temperature in the lifetime of this child. 4C = the death of millions. #WeWantToLive'.

XR activist and teacher Sarah Mintram said: 'Now we've got your attention. By neglecting to communicate the consequences of a 4C world - war, famine, drought, displacement - the Government are failing to protect us.'

Officers removed the D-locks from their necks and took the women to police stations in four separate vans as supporters cheered the protesters on from Parliament Square.

The radical climate action group made headlines at the weekend after it blockaded the Newsprinters printing presses and delayed the distribution of hundreds of thousands of newspapers including the Mail. 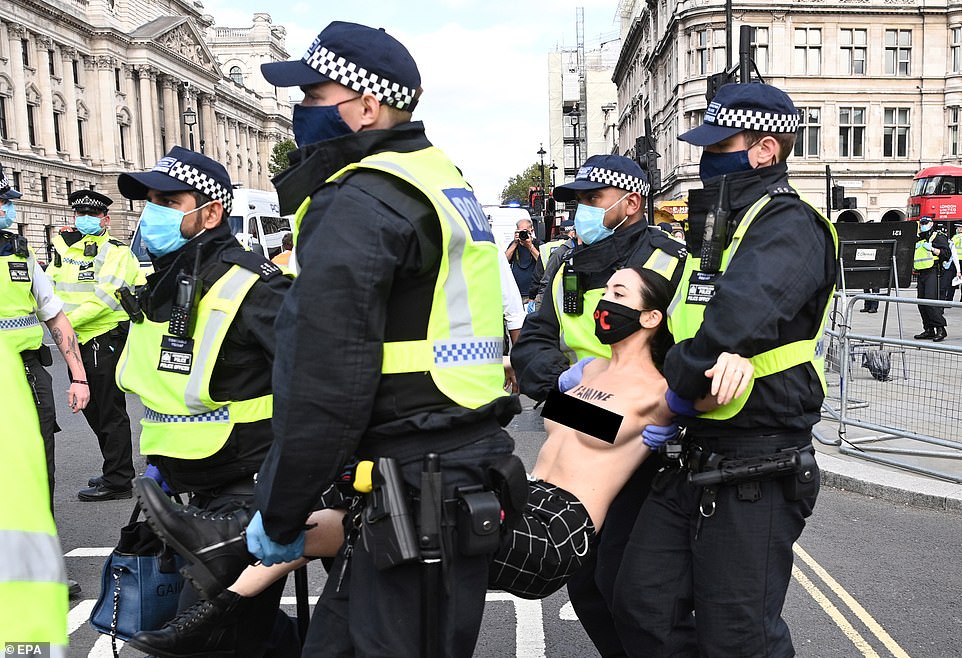 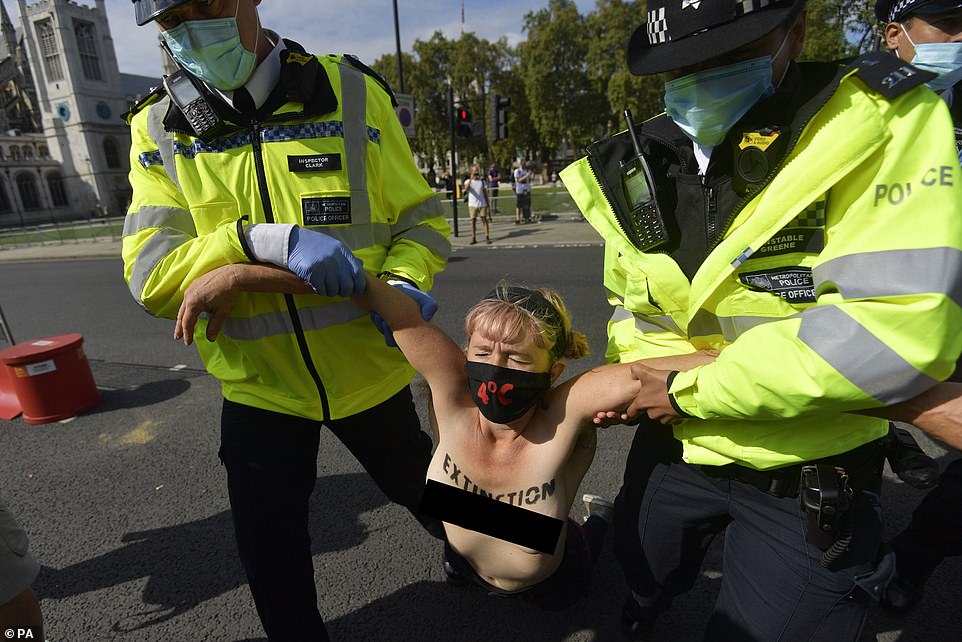 Police detain a topless Extinction Rebellion protester outside Parliament, London, on the last day of demonstrations 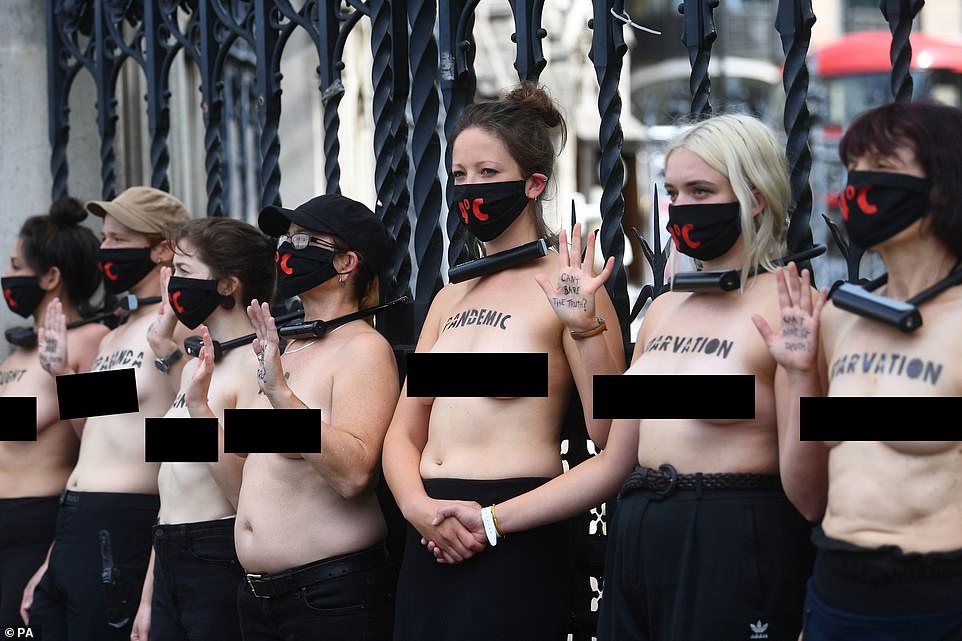 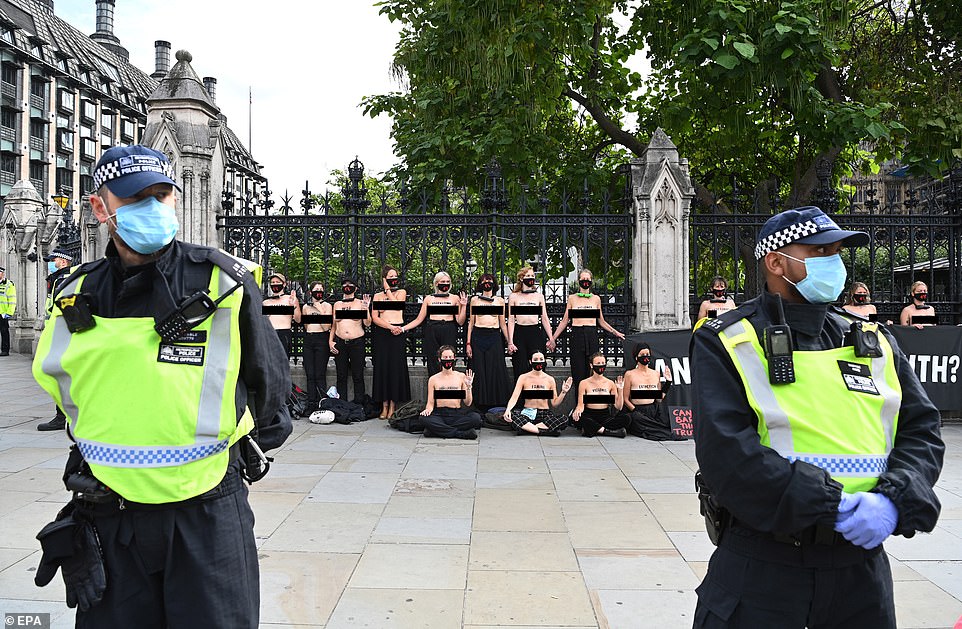 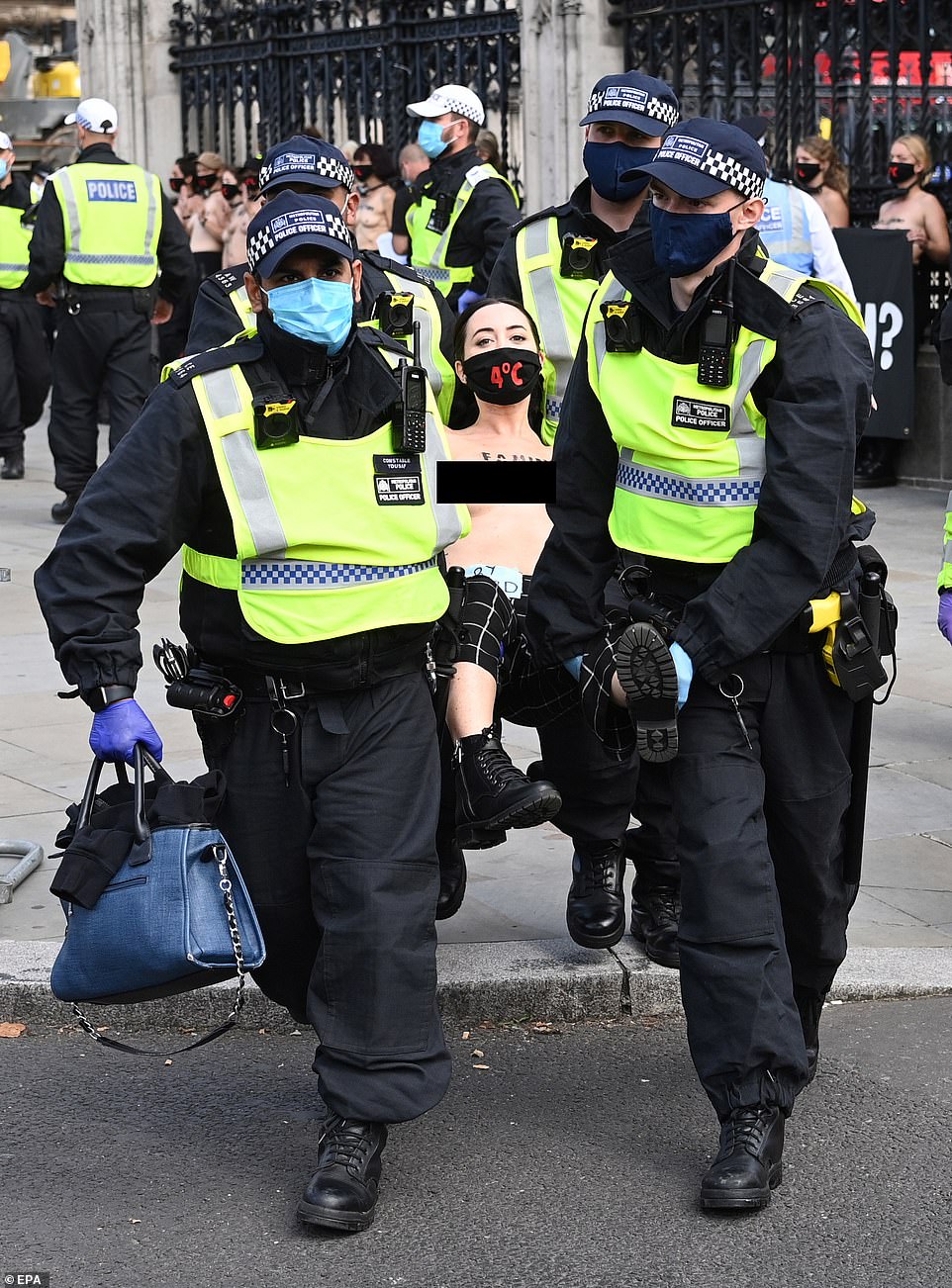 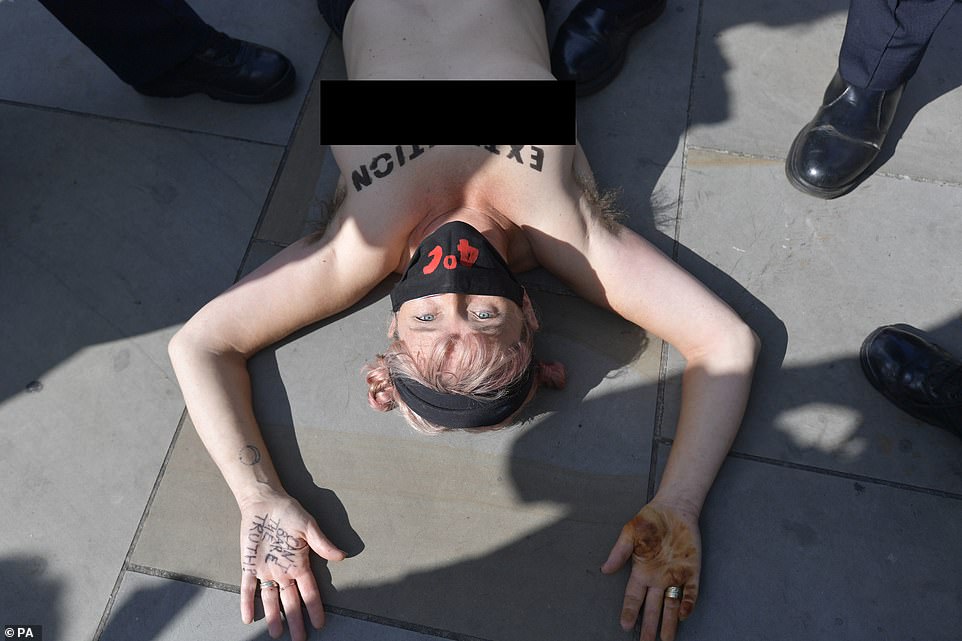 A topless Extinction Rebellion protester outside the gates of Parliament, on the last day of demonstrations

It comes as Priti Patel branded Extinction Rebellion protesters as 'so-called eco-crusaders turned criminals' today as she vowed to crack down on their 'guerrilla tactics'.

Speaking to the Police Superintendents' Association annual conference, the Home Secretary said she would not allow the group to cause 'anarchy'.

Addressing the conference, held digitally due to the Covid-19 pandemic, Ms Patel said: 'Now it is said that where there is no law there is no freedom, and that law and order is the cornerstone of our free society.

'And without it we have nothing. But events of the last week have exposed another emerging threat – the so-called eco-crusaders turned criminals.

'Attempting to thwart the media's right to publish without fear nor favour. And a shameful attack on our way of life, our economy, and the livelihoods of the hardworking majority.

'I refuse point plank to allow that kind of anarchy on our streets. And I'm right behind you as you bring the full might of the law down upon that selfish minority. The very criminals who disrupt our free society must be stopped. And together we must all stand firm against the guerrilla tactics of Extinction Rebellion. 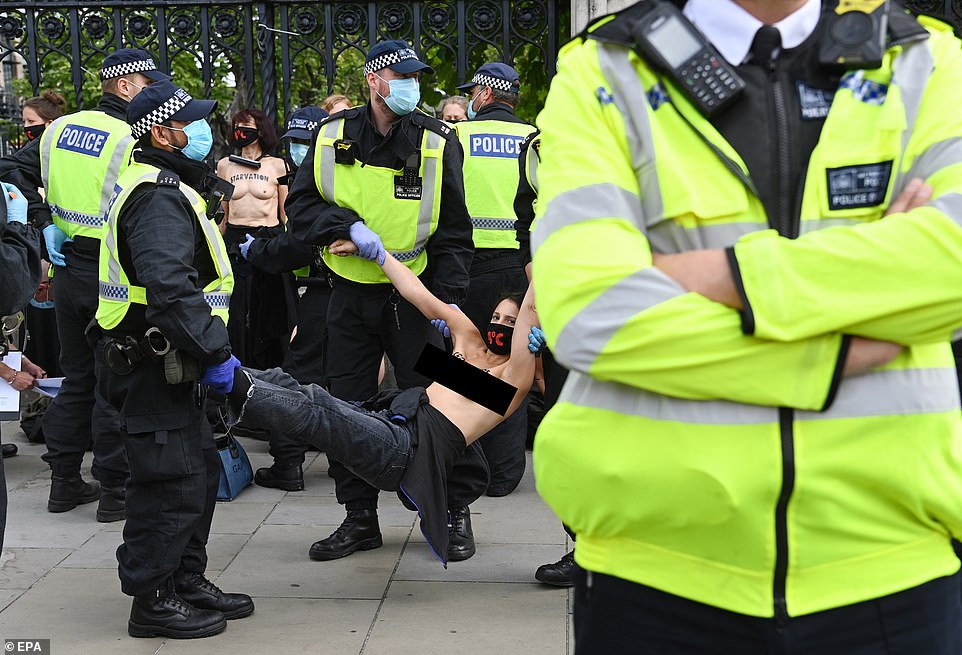 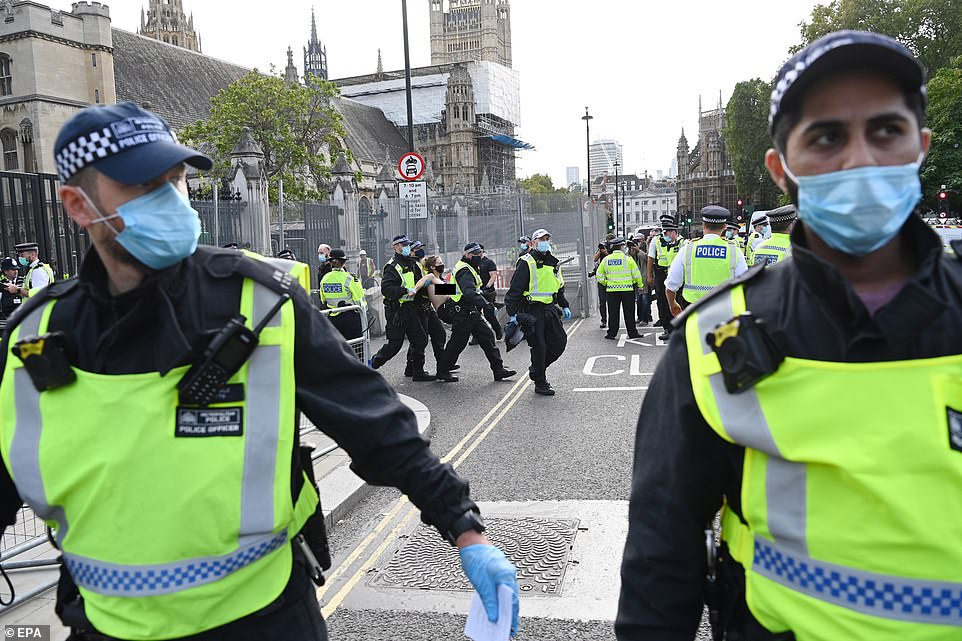 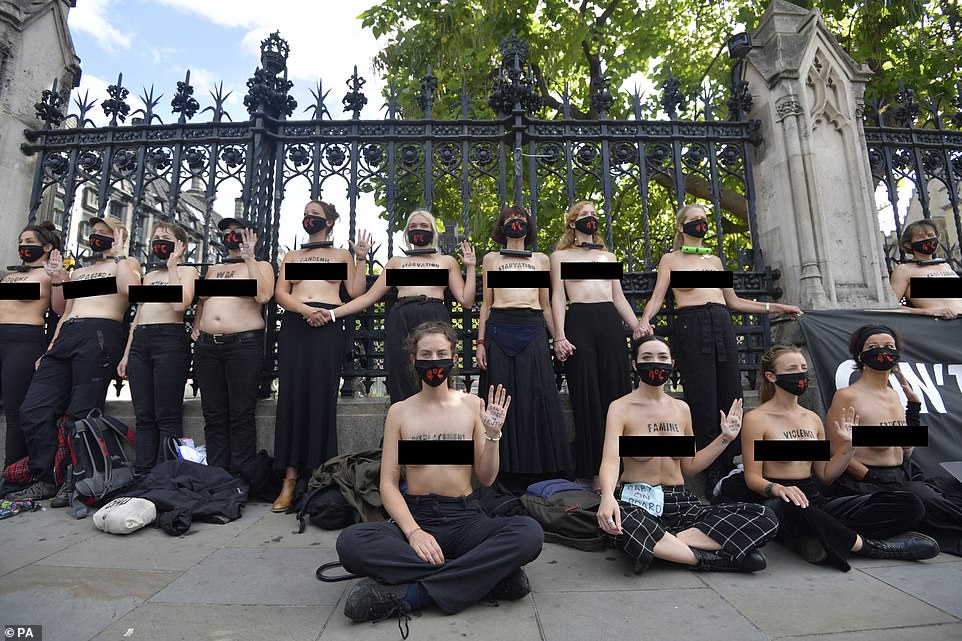 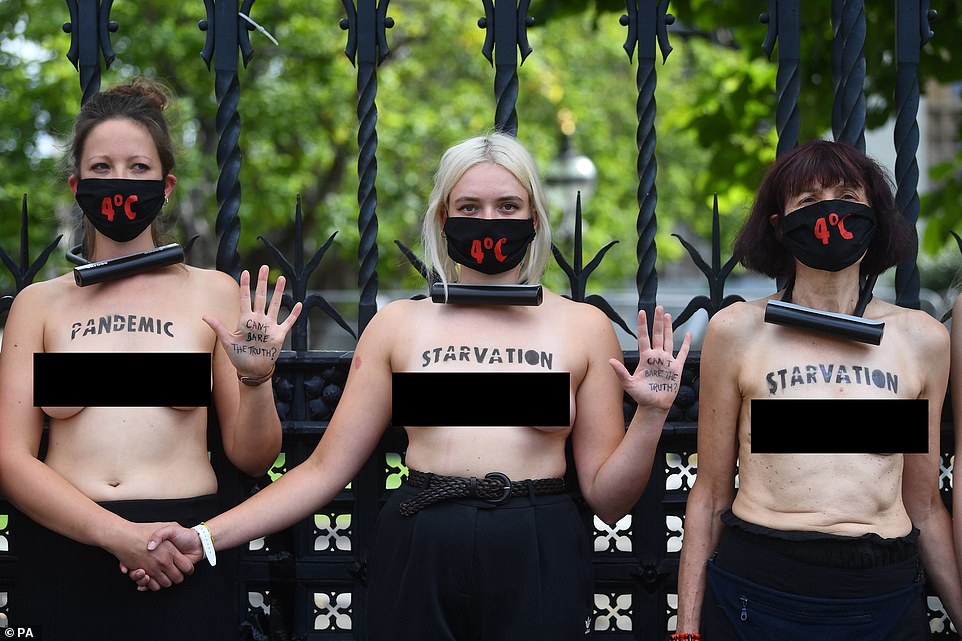 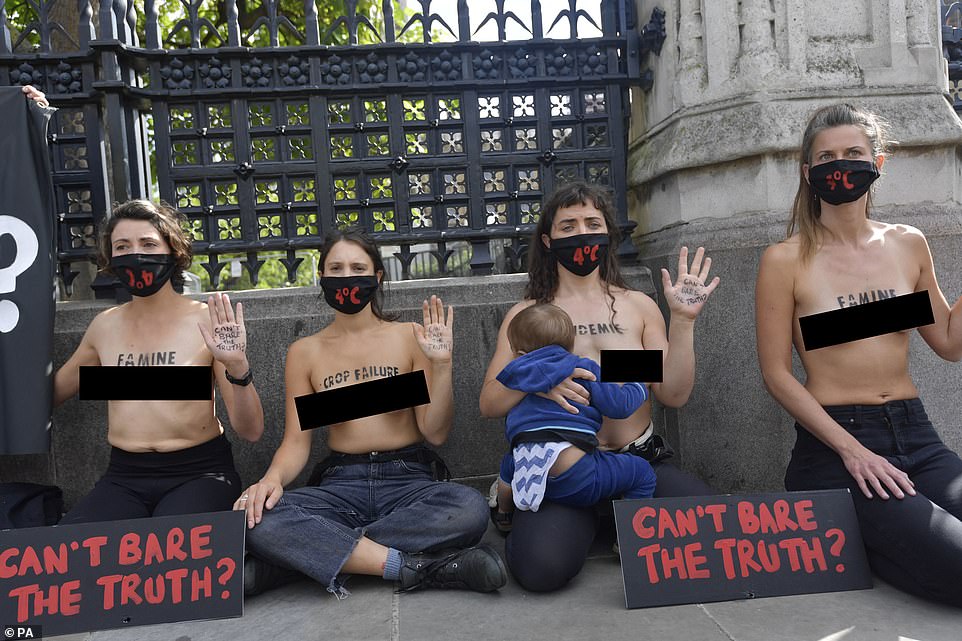 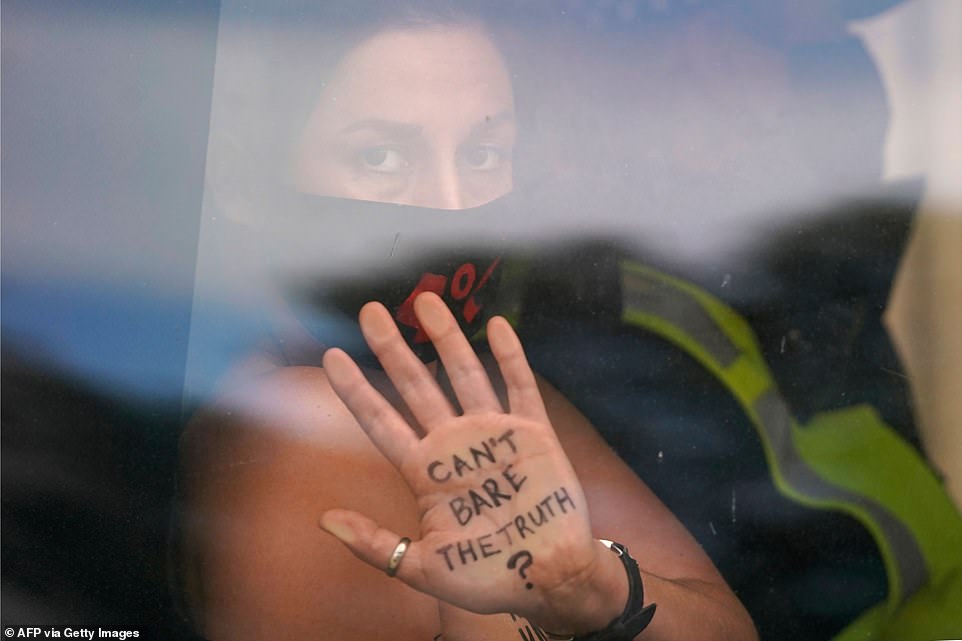 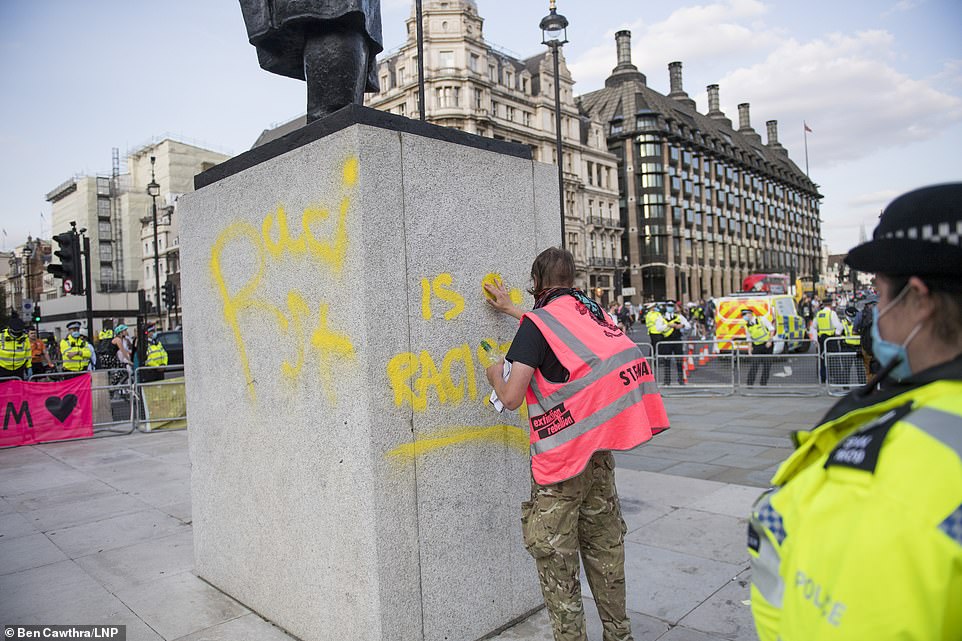 Some protesters daubed graffiti on Winston Churchill's statue, accusing the former PM of being a racist 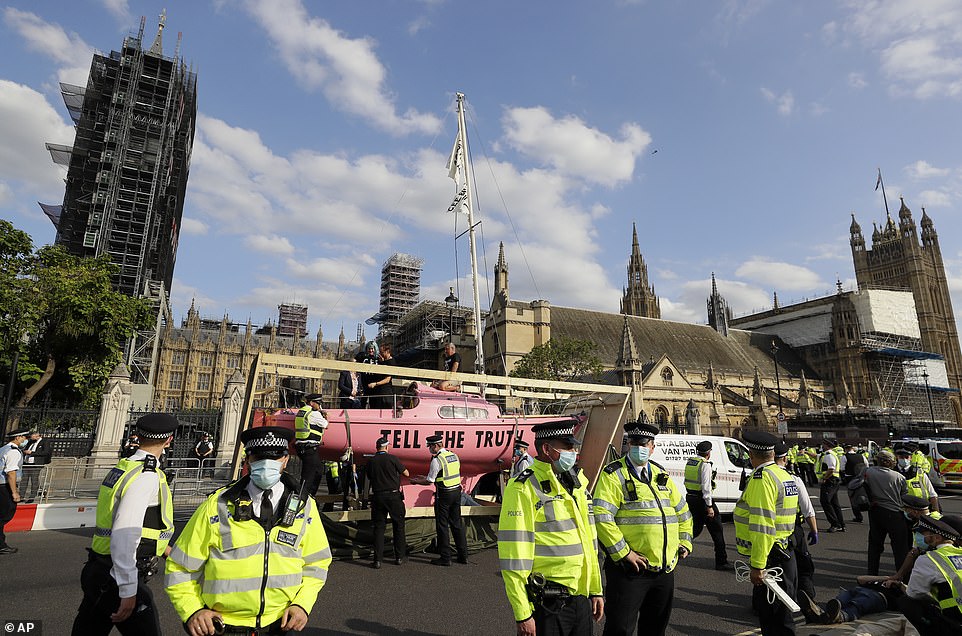 'And that means adapting to the threat that they pose and ensuring that justice is served.'

Ms Patel said 'attacking people's jobs and livelihoods' is not 'peaceful protest'. She added: 'These are not peaceful tactics. These are tactics that are deployed to cause maximum damage to society, blocking of roads for example.

'Last week we saw ambulances and blue lights not even being able to get through to hospitals basically, you know threatening people's lives in addition to the economic wellbeing of our society at a time when actually we're trying to get society up and running all over again.'

Ms Patel's comments come after the Government said powers to help police deal with disruptive protests are 'under constant review'.

Home Office minister Kit Malthouse accused some XR activists of seeking to 'impose an extremist world view' on others, claiming the 'worthy cause' of environmental campaigning is 'undermined by their tactics'.

On Monday, he said he and Ms Patel are committed to ensuring the police have the 'powers required to deal with the disruption' caused by groups, such as XR, telling the Commons: 'I will keep the tools available to tackle this behaviour under constant review.'

He also said the tactics used by XR protesters will be examined to ensure police have the tools needed to 'deal with' problems swiftly. 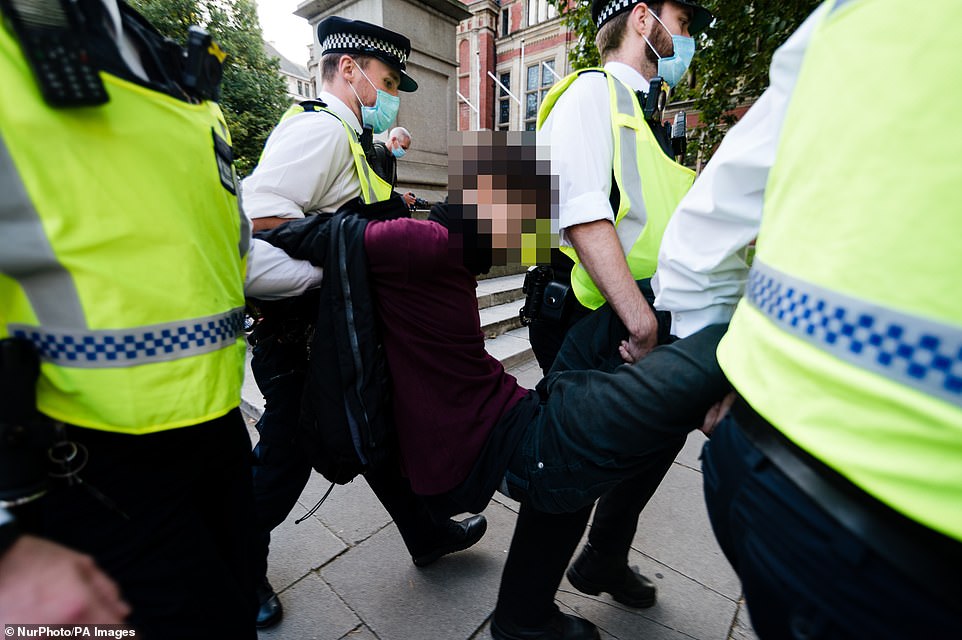 Several protesters were arrested by police, although Scotland Yard is yet to confirm the total number of people detained 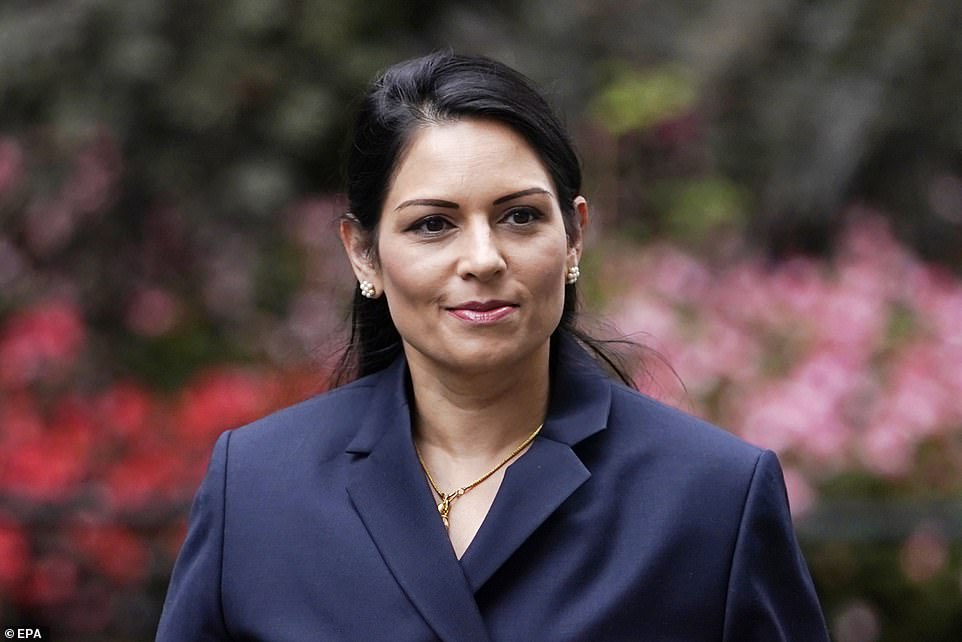 Speaking to the Police Superintendents' Association annual conference by video link, Priti Patel (pictured in Downing Street today) said she would not allow XR to cause 'anarchy' 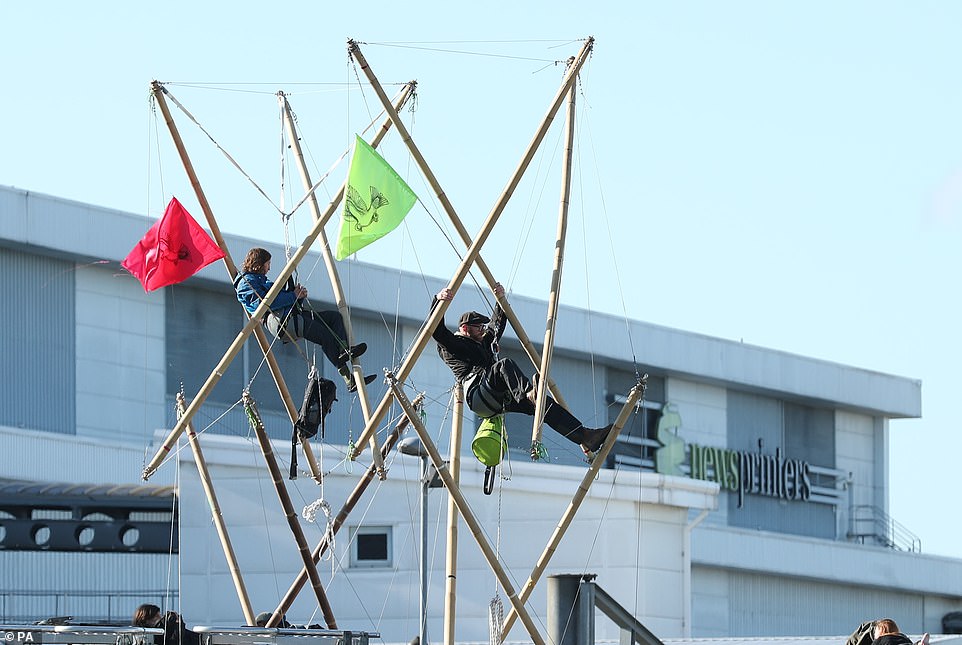 Meanwhile, the Independent newspaper columnist who masterminded the Extinction Rebellion blockade of printworks has claimed that the British media is worse than the Nazis.

Donnachadh McCarthy, 61, has emerged as one of the leading figures in the group, and justified the attack on press freedom by saying: 'This is like World War Two and you guys [the newspapers] are on the other side. That is how we see it.  It puts you on the side of the existential threat.

'It is a different existential threat but it is a bigger one than the Nazis.'

As well as his role as a columnist for the Independent, he is a former deputy chairman of the Liberal Democrats and has appeared on the BBC.

Mr McCarthy attended the protest at the printing plant in Broxbourne on Friday night, briefing journalists at the scene. In total, 77 people have been charged for the disruption at both printing sites.

Fifty-one people have been charged after the demonstration in Hertfordshire, which began at around 10pm on Friday and ended at 11am on Saturday morning. 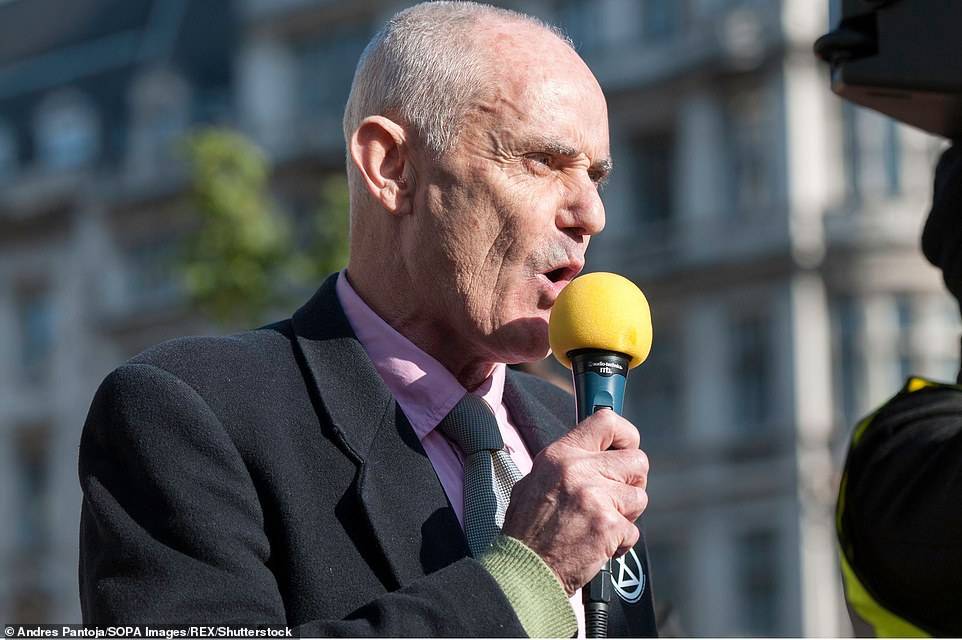 Donnachadh McCarthy, 61, attended the protest at the printing plant in Broxbourne on Friday night, briefing journalists at the scene 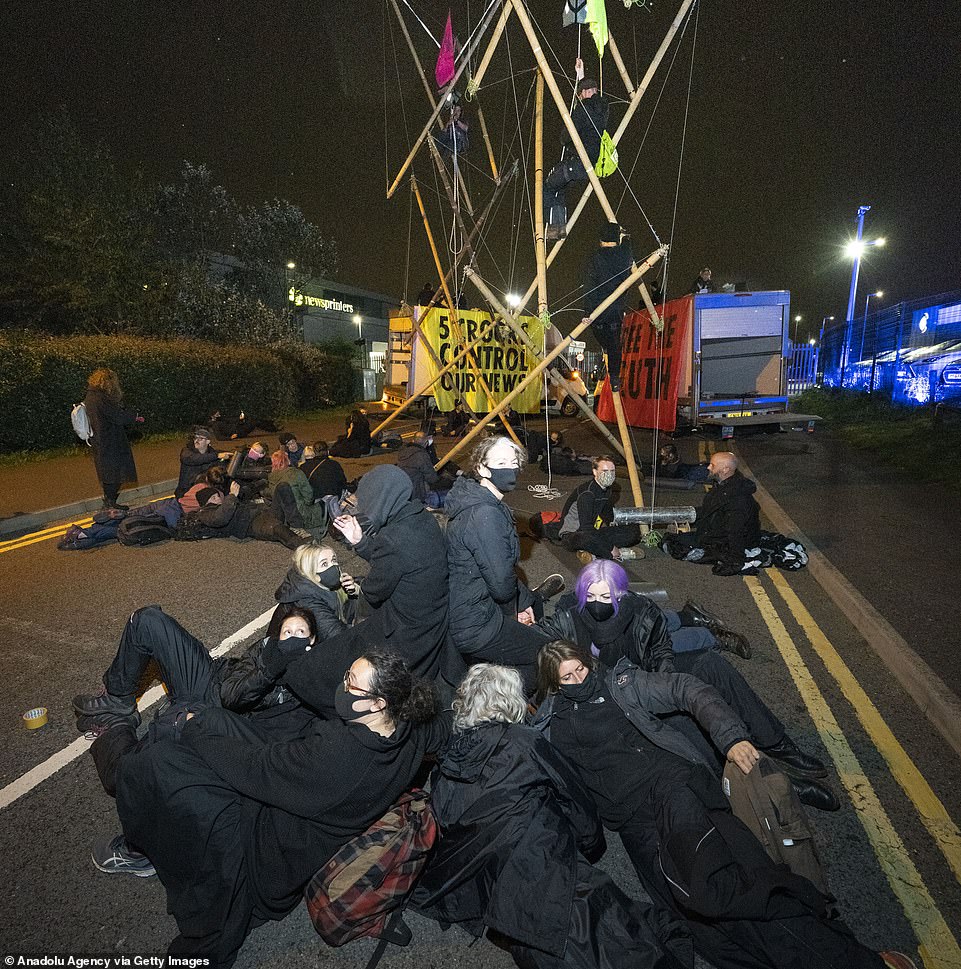 On Friday, XR activists erected platforms made from bamboo to block the road along with two vans, preventing police from clearing the site.

Although he was at the scene, Mr McCarthy insisted he had nothing to do with the paper blockade.

However, he outlined a proposal called 'the Great March for Truth and Blockade' last year, sending it to XR's so-called action circle.

In it, he identified the Broxbourne site as 'very vulnerable to a mass blockade'.

His comments have been slammed, with Tobias Ellwood, a former Army captain and chairman for the Defence select committee, telling the Times: 'It is a tasteless comparison to make. To even use such language shows their immaturity and shows they should not be taken seriously.

'If there are any sensible voices among Extinction Rebellion, they should be distancing themselves from such inflammatory language.'

Critics of the blockade have called it an attack on the free press after XR prevented hundreds of newspapers from being delivered.