Facebook fails to take down page of violent Rose City Antifa group based in Portland that has 23,000 members – despite Mark Zuckerberg's vow to crack down on political violence The Rose City Antifa group from Portland admits that it is 'sometimes' dangerous Page warns 23,000 members to be discreet when planning criminal activity  Last month, Facebook CEO Mark Zuckerberg pledged to remove violent threats, and groups celebrating or promoting violence with many far-right taken down A media monitoring group has expressed surprise that the Rose City Antifa page is still up and running on Facebook's site  Portland has so far endured more than 100 days of demonstrations against racism and police brutality with many of the protestors part of antifa groups

A Facebook page run by the violent Rose City Antifa group based in Portland is still up and running on the social media platform despite a pledge by CEO Mark Zuckerberg last month to clamp down on such extremist organizations.

Facebook has adjusted its policy towards Dangerous Individuals and Organizations and had promised to 'address organizations and movements that have demonstrated significant risks to public safety.'

In August, the social media giant outlined specific ways in how it planned to take action against movements and organizations linked to violence and set about removing far-left groups associated with violence, yet the Rose City Antifa group is still up and running on the website which has billions of users. 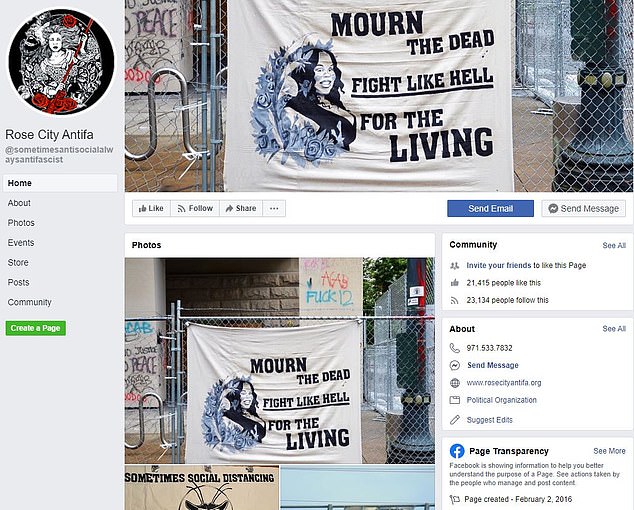 The Rose City Antifa group admits that it is 'sometimes' dangerous and warns its 23,000+ members to be discreet when planning criminal activity

Rose City Antifa's own website admits the group is 'sometimes' dangerous and warns its more than 23,000 members to be discreet when planning criminal activity.

'DO NOT discuss criminal activity or make any action plans on our Facebook wall. You should never make plans with a stranger on Facebook to do this work. Even trying to sort out ride shares, or similar is very unsafe on here. Undoubtedly enemies will fish around with posts of that nature so be wary,' the page cautions members of the group.

As the world's largest social network, with more than 2 billion users, Facebook aims to support a global platform for free expression while sustaining a forum where its community of users feel welcomed, but in August, Zuckerberg pledged to remove violent threats and posts

PREV Brad Parscale announces he is 'stepping away' from the Trump re-election ...
NEXT Troubled girl, 16, takes her own life on school grounds