A political appointee of President Trump has been interfering with COVID-19 reports by health experts at the Centers for Disease Control and Prevention because their data doesn’t match the ‘optimistic messages’ sought by the White House.

In one instance, CDC Director Robert Redfield and his scientists were accused of trying to ‘hurt the president’ with their reports about COVID-19, according to POLITICO.

The reported interference was learned a day after it was revealed that the same group of Trump loyalists were seeking to muzzle Dr. Anthony Fauci, the nation's top infectious disease expert.

Since being named spokesperson for the Department of Health and Human Services, Michael Caputo, the Republican Party operative and former Trump campaign official, and his staff have pressured CDC personnel to alter the wording of its Morbidity and Mortality Weekly Report. 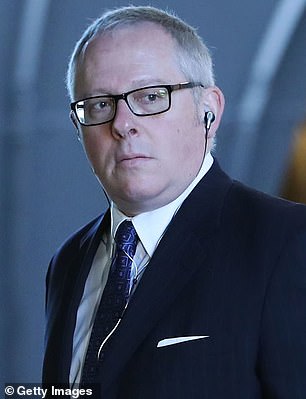 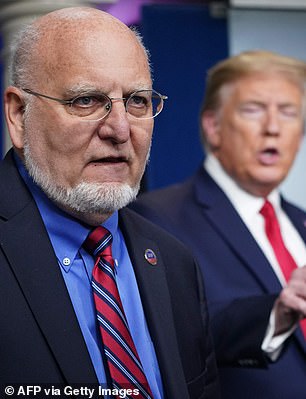 Michael Caputo (left), who was named by President Trump as chief spokesperson at the Department of Health and Human Services this past April, has reportedly demanded that Centers for Disease Control and Prevention Director Robert Redfield (right) and his staff alter their scientific reports so that they're in line with the White House's 'optimistic' message 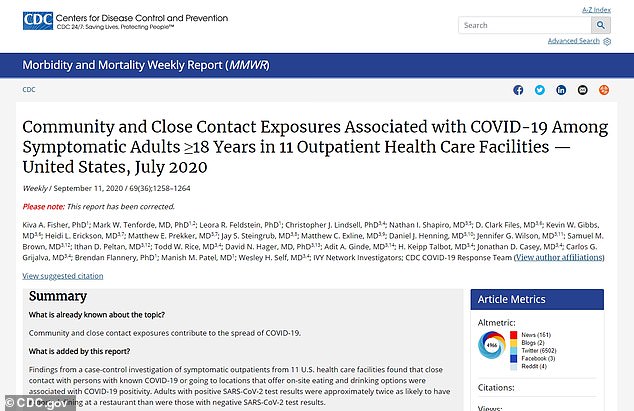 Since being named spokesperson for the Department of Health and Human Services, Caputo, the Republican Party operative and former Trump campaign official, and his staff have pressured CDC personnel to alter the wording of its Morbidity and Mortality Weekly Report (above)

The report has usually been published without any political interference and is a key method by which the CDC advises doctors and the general public about COVID-19.

Caputo, who has no medical or health background, was named to the spokesperson’s position in April.

Since then, he and his team have tried to stop the CDC from releasing some of its findings that do not line up with messaging from Trump, POLITICO is reporting.

Caputo and his staffers reportedly tried to retroactively change agency reports which they claimed inflated the risks of COVID-19.

The political appointees reportedly sought to make clear in the reports that American who became infected with the virus did so due to their own behavior, according to POLITICO.

Another report which Caputo and his team objected to dealt with the CDC findings on how doctors were prescribing hydroxychloroquine, the anti-malaria drug touted by Trump as a treatment for COVID-19. 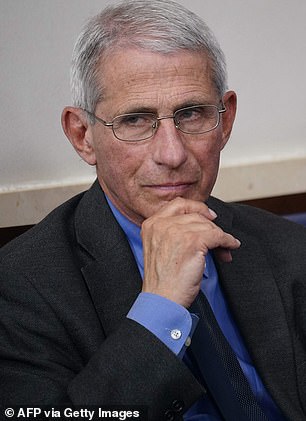 Medical professionals have stated that there is no therapeutic benefit to using the drug to treat COVID-19.

According to POLITICO, Caputo and his staff delayed the CDC report for a month while they questioned the authors’ political motivations.

The report, which was published last week, stated that ‘the potential benefits of these drugs do not outweigh their risks.’

POLITICO cited an August 8 email in which a Caputo aide slammed Redfield and other CDC officials for using the agency’s reports to ‘hurt the President.’

‘CDC to me appears to be writing hit pieces on the administration,’ Paul Alexander, a political appointee, wrote.

Alexander demanded that Redfield re-edit two published reports which he claimed overstated the risks of COVID-19 to children.

Alexander also accused Redfield and the agency of undermining the president’s efforts to get schools reopened.

Alexander wrote: ‘CDC tried to report as if once kids get together, there will be spread and this will impact school re-opening . . . Very misleading by CDC and shame on them. Their aim is clear.’

He demanded that Redfield stop all future MMWR reports until the CDC changed its longstanding publication process and allowed Alexander to personally review the whole report before it was published.

Alexander also demanded that the CDC let him make line edits. He also wanted the agency to make an ‘immediate stop’ to the reports.

Caputo recruited Alexander, an assistant professor of health research at Toronto’s McMaster University, this past spring to be his scientific adviser.

‘The reports must be read by someone outside of CDC like myself, and we cannot allow the reporting to go on as it has been, for it is outrageous,’ Alexander told Redfield. 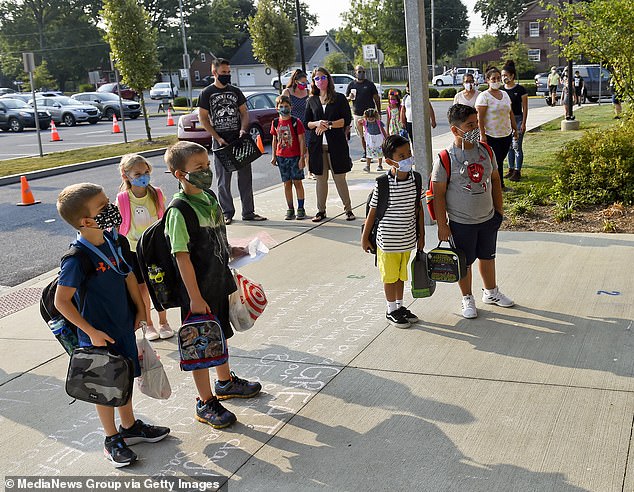 Paul Alexander, who is a senior adviser to Trump-appointed HHS assistant secretary for public affairs Michael Caputo, asked as recently as Tuesday for Fauci to avoid advocating for children to wear masks

‘Nothing to go out unless I read and agree with the findings how they CDC, wrote it and I tweak it to ensure it is fair and balanced and “complete”.’

While CDC officials have pushed back on Caputo’s encroachment into their work, they have recently allowed his team to review the reports before their publication.

Caputo defended the actions of his team in seeking changes to CDC reports, telling POLITICO that Alexander is ‘an Oxford-educated epidemiologist’ who specializes ‘in analyzing the work of other scientists.’

‘Dr. Alexander advises me on pandemic policy and he has been encouraged to share his opinions with other scientists,’ Caputo told POLITICO.

‘Like all scientists, his advice is heard and taken or rejected by his peers.’

Caputo said it was appropriate for his department, HHS, to review CDC reports.

‘Our intention is to make sure that evidence, science-based data drives policy through this pandemic - not ulterior deep state motives in the bowels of CDC,’ he said.

Alexander is the same HHS official who has reportedly been working to stop Fauci from speaking publicly about the risks of COVID-19 in children.

Emails obtained by Politico show that Alexander has been trying to instruct Fauci's staff about what he should say during media interviews.

Alexander asked as recently as Tuesday for Fauci to avoid advocating for children to wear masks.

'Can you ensure Dr Fauci indicates masks are for the teachers in schools. Not for children,' Alexander wrote in an email to Fauci's spokesperson ahead of an interview with MSNBC.

'There is no data, none, zero, across the entire world, that shows children especially