Ordinary Melburnians are struggling under draconian lockdowns with up to 97 per cent of home borrowers unable to pay their mortgages in some suburbs.

Melbourne is home to seven of Australia's ten worst postcodes for mortgage stress where home borrowers can't service their loan and pay their bills on time.

The big banks in September are also auditing borrowers to see if they can start servicing their loans again after six months of mortgage repayment holidays.

Unemployment too is tipped to hit double-digit figures by Christmas for the first time since 1994. 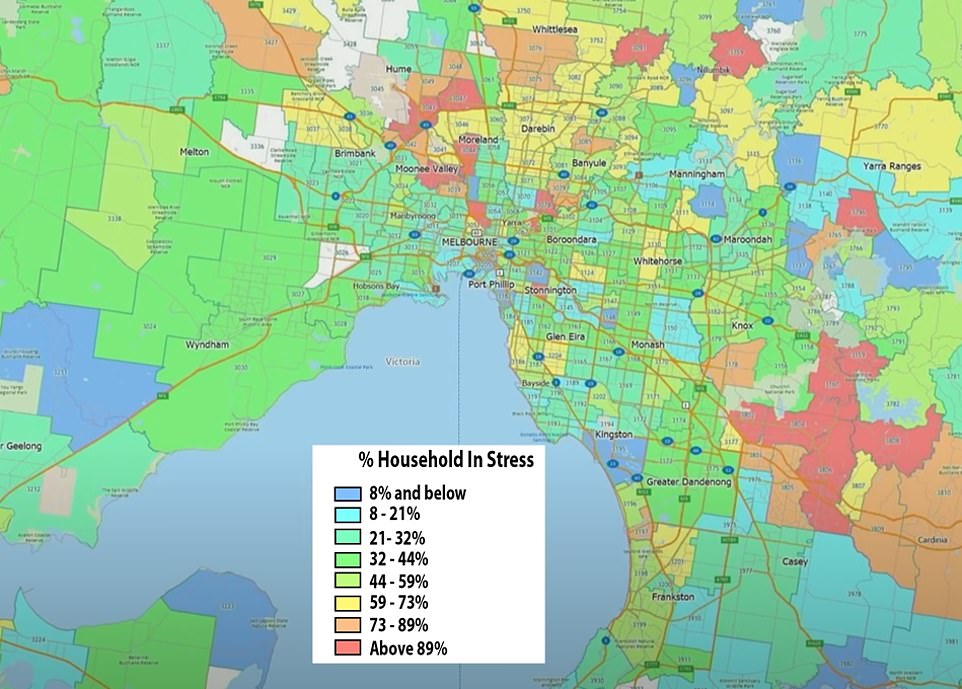 Source: Digital Finance Analytics data on the proportion of borrowers by suburb who were in mortgage stress in August 2020

At Narre Warren, in Melbourne's outer south east, 96.8 per cent of mortgage holders are in dire straits.

The awful story was similar in nearby Belgrave with 96.1 per cent of borrowers struggling in the suburb that is home to the closed Puffy Billy steam train tourist attraction.

Rich and poor suburbs alike are in trouble in Australia's second biggest city with 95.6 per cent of borrowers struggling in upmarket Armadale as a similar proportion, 95.2 per cent, buckle to financial pressure in working class Aberfeldie and Essendon in the city's north.

Outer suburbs more than 30km from the city centre were also a red zone with 94.1 per cent of mortgage holders financially treading water in Mount Evelyn as 93.8 per cent of borrowers at Endeavour Hills wondered about their next bill.

Digital Finance Analytics principal Martin North, an economist, said this was not just an economic crisis - with many borrowers a month away from disaster.

'The pressure on these households is not just financial, it translates into both social and economic pressures as well,' he told Daily Mail Australia.