AFL star Jake Stringer, 26, is told he's too fat after returning from a serious injury and struggling on the field Kane Cornes called out Jake Stringer's fitness after a big loss to Port Adelaide Stringer has struggled for form in his return from an ankle syndesmosis injury Cornes claimed his display of fitness wasn't good enough for professional footy Bomber's coach John Worsfold said he had no issues with Stringer's body shape

AFL star Jake Stringer has been called too unfit by Port Adelaide legend Kane Cornes after a poor performance on Saturday.

The 26-year-old has struggled to make an impact for the Essendon Bombers in his return from an ankle syndesmosis injury after a great start to the season.

The Bombers copped a 50-point drubbing at the hands of Port Adelaide on Saturday, with Stringer claiming a mere five disposals.

'I'll get smashed for this and the PC brigade will come after me,' Cornes told the program. 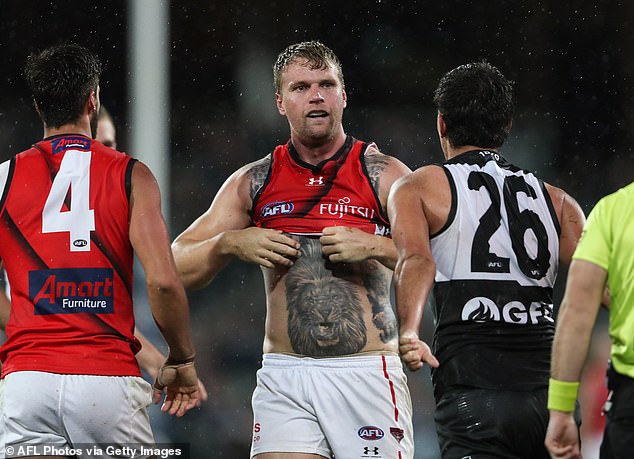 'If you're a full-time professional athlete, you don't present yourself like that. To steal (Port Adelaide coach) Ken Hinkley's line, you get what you deserve in footy.

'That's why he returns five disposals yesterday, he's not fit enough. When you don't perform and present that out of shape, you run the risk of being criticised for it.

'He needs to look at what Christian Petracca has done and what Max Gawn has done in the past if he wants to get the most out of that talent because that display of physical fitness is not good enough.'

PREV Australia could join forces with the US, Japan and India to create alliance ...
NEXT Four Navy aircrew parachute to safety moments before E-2C Hawkeye plane crashes ...