Wetherspoon founder Tim Martin today branded the Rule of Six as 'byzantine' and 'complicated' as he likened the government's chaotic ever-changing restrictions to a 'speedboat in a competition'.

The pub chain's chief executive, 65, said the UK's policies needed to be more like an ocean liner, with only tiny alterations to their course during the pandemic.

He spoke after there had been 66 workers across 50 of the firm's pubs who had tested positive for coronavirus.

Mr Martin, worth an estimated £322million, said: 'I think one of the problems is that the rules have become byzantine and complicated.

‘I think that the UK and the coronavirus problem needs to be like the Queen Mary crossing the Atlantic – just the odd touch at the tiller.

‘What we are getting is different rules all the time, it’s like a speedboat in a competition. We are changing all the time and I don’t think anyone really understands the rules anymore.’ 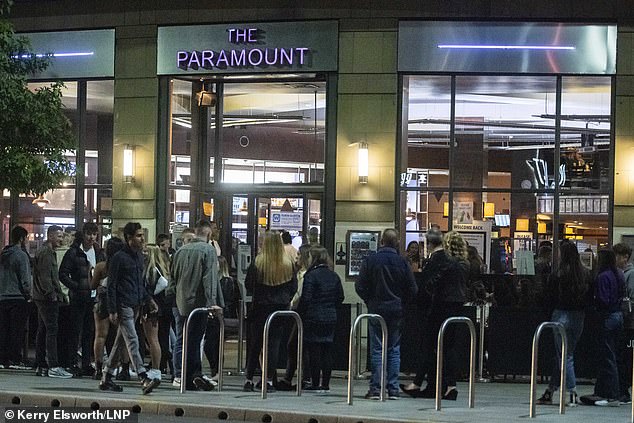 Drinkers crowd outside the Paramount Wetherspoons in Manchester on Saturday night

He added to Radio 4’s Today programme: ‘I think it’s a slightly chaotic rule myself – apologies to the government, but it just doesn’t seem to me to make a lot of sense.

'94 per cent of our pubs have had no coronavirus cases whatsoever and only one per cent has had more than one case.'

He added the assumption that pubs were the centre of transmissions was wrong and they were safe.

Two pubs had up to four employees infected and six have confirmed two while the remaining 40 have reported just one worker testing positive for Covid-19.

JD Wetherspoon, which employs 43,000 people across its 861 pubs said that the vast majority of its establishments have recorded no positive cases.

The company hasn't revealed which pubs have been affected. 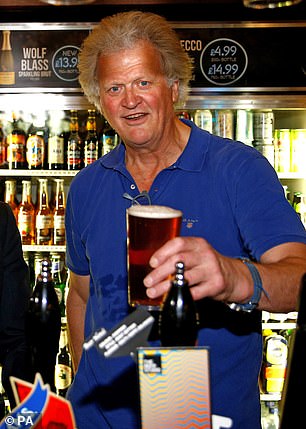 The firm said most of the reported cases have been mild or asymptomatic and 28 of the 66 employees have already returned to work, after self-isolating in accordance with medical guidelines.

It follows a rise in new coronavirus cases, with a further 3,330 positive cases recorded in the UK on Sunday.

A whopping 32million Brits have crammed into Wetherspoons pubs since they reopened on July 4.

Pubs don't have to close after finding a positive test result unless they are made to do so by local health protection officials.

Mr Martin recently shot down claims made by a disease expert that pubs are 'dangerous places to be' during the pandemic.

He blasted: 'The situation with regard to pubs has been widely misunderstood.

'It is clearly not the case that pubs are ''dangerous places to be''.'

Mr Martin also claims the chain has invested £15million into safeguarding its pubs and implementing measures such as screens between tables and reducing capacity.

It comes as the pub giant revealed that trading was 'very quiet' over the weekend, before the Government's tightened restrictions on social gatherings came into action this morning.

Mr Martin shrugged off claims that larger groups might rush to the pub before the implementation of the new 'rule of six'. 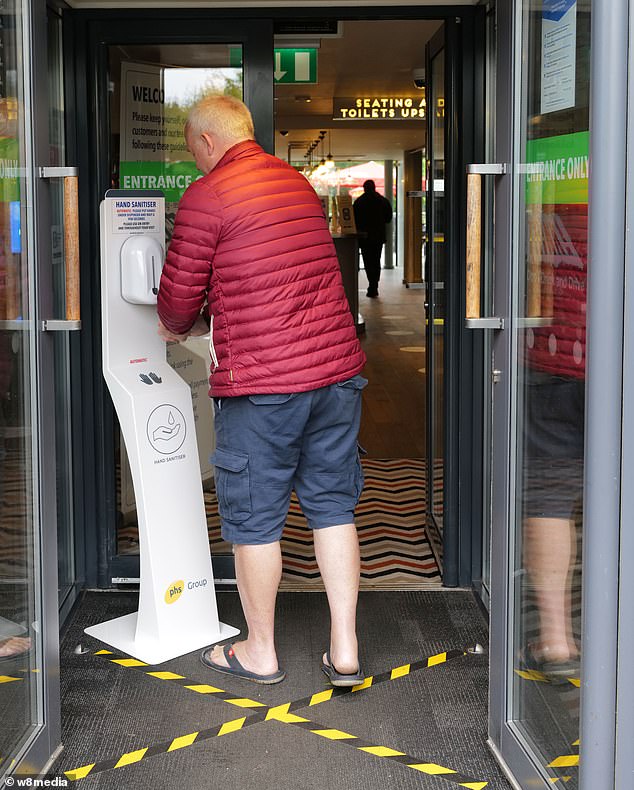 The new rule means people could face fines of up to £3,200 if they are involved in social gatherings of more than six people.

Mr Martin said: 'Trade was very quiet over the weekend, as the public weighed up the evidence about the alleged dangers of going out - Wetherspoon sales were 22.5 per cent below the equivalent Saturday last year.'

Trade groups, including the British Beer & Pub Association, said the new rule will halt the recovery of hospitality firms without extended financial support for the sector.

Mr Martin told investors on Monday that he believes the safety of pubs during the pandemic has been 'widely misunderstood'. 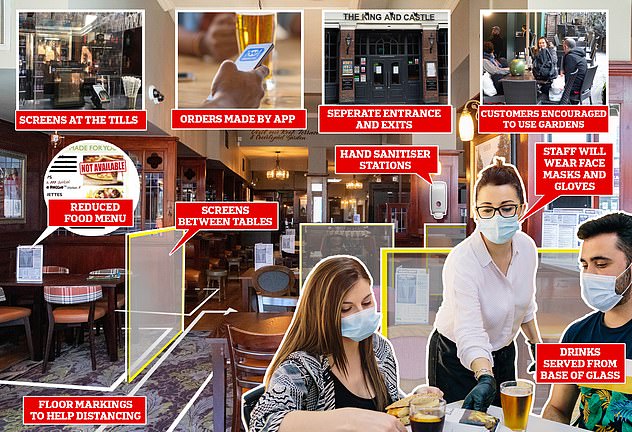 Last month, the group said like-for-like bar and food sales were down 16.9 per cent for the 44 days to August 16, compared with the same period last year.

Mr Martin said the sales slump means it expects to post a loss for the year to July 26.

The news comes as the 'rule of six' law came into force today - with public gatherings now limited to just six people indoors and out.

Home Secretary Priti Patel today warned Brits will get criminal records if they break the rules.

Home Office officials have said that anyone who refuses to pay the initial £100 on-the-spot fine will be arrested and taken to court.

Pubs, bars and restaurants must also take the details of punters or risk £1,000 fines.

Life under the Rule of Six: What Britons can and can't do as new Covid restrictions come into force across UK today – with pub trips and barbecues to be kept under seven people - but up to 30 allowed at weddings

Britons are facing curtailments on their freedom as England is subjected to draconian new coronavirus restrictions amid a spike in infections.

Boris Johnson sent shockwaves around the country last week as he announced a ban on groups of more than six people from meeting, in what he dubbed a 'rule of six'.

Ahead of the new restrictions, Brits hit pubs, parks and beaches at the weekend for one last knees-up with friends and family.

The stringent ban came into force across England yesterday, in an attempt to tackle rising coronavirus infection rates by restricting meetings both indoors and outdoors, including homes, parks, pubs and restaurants.

An army of 'Covid secure marshals' will patrol the streets, clamping down on barbecues, book clubs, picnics and pub lunches if they see more than six people together.

The marshals can call police who will fine people up to £3,200 if they disobey the rules.

Similar rules will apply in Wales, though groups of 30 can still meet outdoors, while Nicola Sturgeon has said she cannot rule out changing the number of people allowed to gather together in Scotland.

Here, we outline exactly what the new restrictions mean for those living in England... 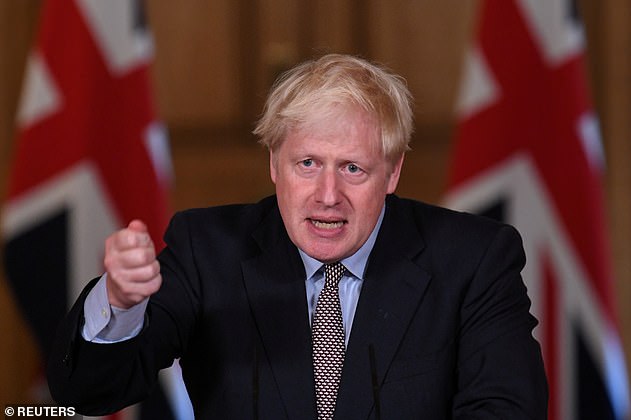 Boris Johnson sent shockwaves around the country last week as he announced a ban on groups of more than six people from meeting, in what he dubbed a 'rule of six' 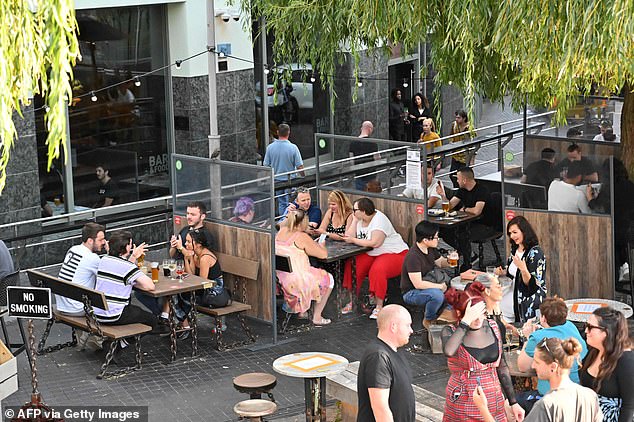 Ahead of the new restrictions, Brits hit pubs, parks and beaches at the weekend for one last knees-up with friends and family. Pictured, People enjoy a drink outside a pub in Camden yesterday

No more than six people will be allowed to get together in England – with a few exceptions including attending weddings, funerals, and christenings, playing in sports matches, going to school and going to work.

Anyone caught breaking these new restrictions can be fined £100, doubling for each new incident up to £3,200.

The law could be in place for months, sparking fears it could ruin Christmas for millions.

Are the rules the same in other parts of the UK?

No. In Scotland and Wales, children under 12 will not be included in the figures.

In Scotland, a new law has come into force limiting social gatherings to a maximum of six people from two households.

The rules apply both indoors and outdoors - including in homes, gardens, pubs and restaurants.

Until now up to eight people from three homes were allowed to meet indoors, and 15 from five households outdoors.

In Wales, up to 30 people can meet outdoors. People will only be able to meet in groups of six or under indoors and must all belong to the same extended household group.

Up to four households are able to join together to form an extended household - but children under 12 will be exempt and will not count towards that total.

Can I have more than five friends over for a barbecue or go to a friend's birthday party?

Mass outdoor raves of more than six people are not permitted by the current coronavirus restrictions.

In a direct plea to young people, Boris Johnson said that they should consider their behaviour 'for the sake of your parents' and your grandparents' health'. 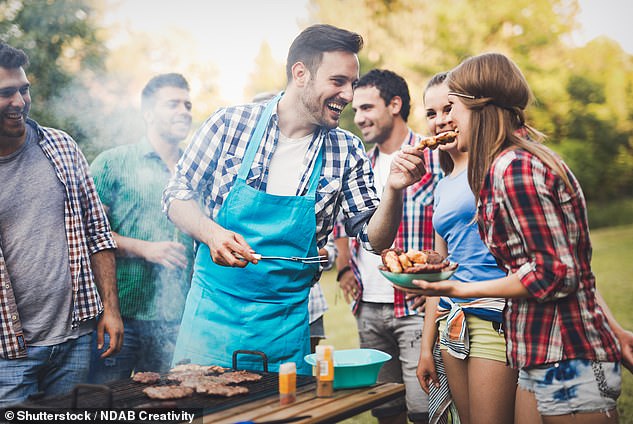 He said among 17 to 18 year-olds and 19 to 21 year-olds the numbers had gone up 'really quite steeply' since mid August.

He said that data suggested that without action Britain would be on a path 'extremely similar' to France where the numbers have continued to rise - cautioning that the situation was likely to be perilous all the way through to Spring.

The new rules come after the number of daily positive Covid-19 cases in the UK rose to almost 3,000 - figures not seen since May.

Ministers hope the change to the law will make it easier for the police to identify and break up illegal gatherings.

Why are the new measure being introduced?

Infection rates have gone up quite rapidly prompting chief medical officer Professor Chris Whitty to say the nation is 'not yet in trouble, but heading for trouble' in these circumstances.

The cases are most common among the 19-21 age group but there is concern that the rises in younger people may then move quickly through different older age groups.

Other warning signs also include a rise in the percentage of positive tests which can not be put down to more testing taking place.

Where will the new rules apply?

The rules will apply across England to all ages and in any setting either indoor and outdoors, at home or a pub.

Prime Minister Boris Johnson said it is safer to meet outdoors and people should keep their distance from anyone they do not live with, even if they are close friends or family.

He said people 'must not meet socially in groups of more than six - and if you do, you will be breaking the law.'

What will the punishments be for breaking the rules?

Mr Johnson said the new rules will be enforced by the police and anyone breaking them risks being 'dispersed, fined and possibly arrested'.

Failure to stick to the new rules could mean a £100 fine, which will double with every subsequent offence up to £3,200.

What about religious worship?

Places of worship such as churches, synagogues, and mosques will stay open, but congregations must stay at least one metre apart. 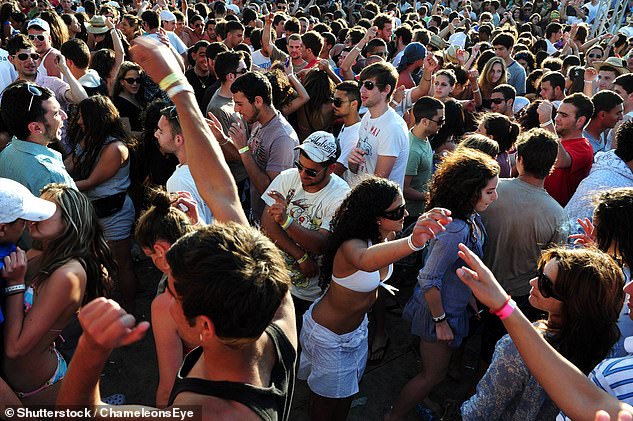 Concerns have been raised over the holding of illicit raves in 'blatant contravention' of rules aimed at preventing the spread of coronavirus infection (file image, 2010)

Can I meet up with friends for a kickabout?

Emmy Award presenters will rock full hazmat gear to present winners at their ...