Wheelie foolish! Moment a reckless biker pulled a 100mph wheelie – as he sped past an unmarked police car Lee Embleton, 51, was filmed driving on the A194 in Gateshead, Tyne and Wear On September 11 he admitted dangerous driving at Newcastle Crown Court   He is due to be sentenced on November 13 after getting an interim driving ban

This is the heart-stopping moment a careless thug sped past a police car while pulling a wheelie on the fast lane of the motorway.

Lee Embleton, 51, was filmed careering along the road at 100mph when he shot past an unmarked police car.

Officers were travelling on the A194 slip road at Follinsby Lane in Gateshead, Tyne and Wear, when he and another rider overtook them.

On September 11, Embleton, of Durham, admitted dangerous driving at Newcastle Crown Court and will be sentenced on November 13.

Police had watched in horror as the reckless driver performed a wheelie while speeding in the fast lane of the carriageway at around 1.30pm on June 23, 2018.

The video shows the police vehicle merging on to the motorway as the bike flies past them on the right with the driver balancing on his back wheel. 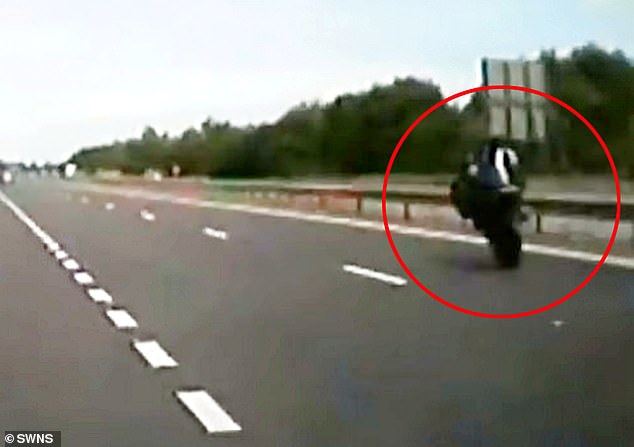 Lee Embleton, 51, sped past an unmarked police car on the A194 slip road at Follinsby Lane in Gateshead,