Covid tests will have to be rationed, Matt Hancock admitted yesterday.

In a humiliating climbdown, he said a 'priority list' would ensure care homes, hospitals, schools and key staff had enough.

In a torrid session in the Commons, the Health Secretary was also forced to admit the current critical shortages could drag on for weeks.

The public had been told to seek tests 'if in doubt'. But checks by the Mail found that 46 of the 49 virus hotspots – including Bolton, Bradford and Oldham – had no swabs to offer.

Preston, one of the three areas  providing tests said they were not available until January – and 22 miles away.

Mr Hancock is considering making GPs 'gatekeepers' for the system, according to ITV's Robert Peston. This would mean patients would get a test only on their say-so. Peston also reported that if the rule of six did not flatten the pandemic curve within two weeks further lockdown measures would be brought in.

Long queues were seen outside testing centres yesterday, involving many desperate people who had failed to get an online appointment but turned up anyway. 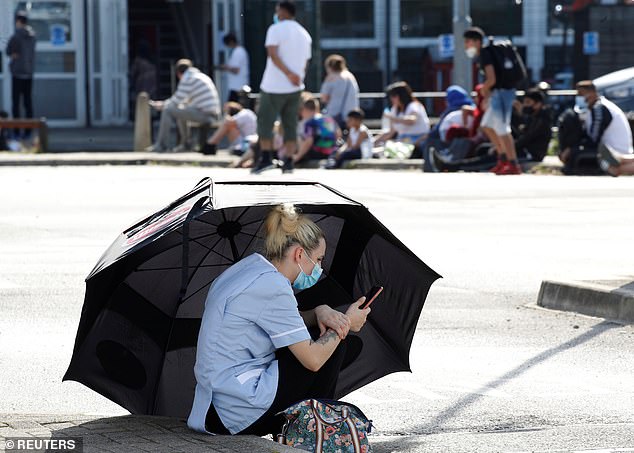 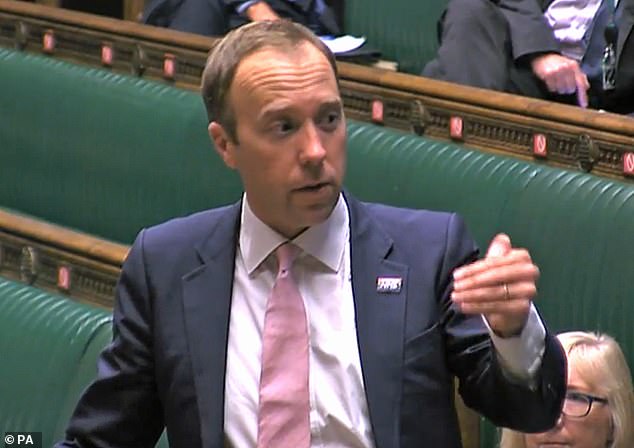 A healthcare worker was one of around 150 outside a walk-in centre in Bury, where infection rates have reached an alarming 77.5 per 100,000 residents.

She shaded herself with an umbrella at the site where staff say they have been 'overwhelmed'.

Lines also formed in Birmingham and Southend – but in a sign of the general chaos – other test centres were nearly empty. Concerns were also growing about the Government's seven 'lighthouse labs' and their ability to process results, due to shortages of staff and equipment.

One MP said her constituents in Twickenham, south-west London, had been told to travel to Aberdeen to book a test.

Munira Wilson, Lib Dem health spokesman, said: 'We were promised a world-beating test and trace system but what we have at the moment is an utter shambles.'

Ministers first faced a crisis over testing early on in the first wave of Covid when a campaign by the Mail led to Mr Hancock vowing to deliver 100,000 tests a day.

That pledge was later raised to 200,000, then 500,000 by the end of October and now four million by next February under the ambitious 'Operation Moonshot'.

However, the system has been thrown back into chaos in recent days because demand for tests has massively increased, overwhelming laboratories. 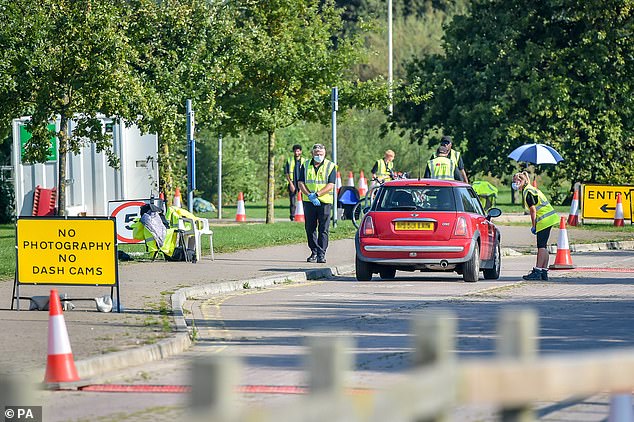 The surge has resulted from a rise in daily cases, the return of schools, the rolling-out of regular swabs to care homes and an increase in outbreaks.

As a result, there has been a deluge of complaints that people cannot access tests locally or that they have to wait too long to find out if they are positive or negative. Schools have been closed while teachers wait for results on sick pupils.

NHS leaders warn of a crisis in hospitals, with medics forced to stay away from work and operations cancelled.

Mr Hancock was yesterday summoned to the Commons to answer an urgent question from Labour on the fiasco. Asked whether the issue would be sorted this week, he replied: 'I think we will be able to solve this problem in a matter of weeks.'

Citing testing problems, Commons Speaker Lindsay Hoyle said: 'This is completely unacceptable and totally undermines track and trace so I have raised my concerns with ministers to push for action to be taken as a matter of urgency.'

Dr Layla McCay of the NHS Confederation, which represents healthcare organisations, said: 'Our members are telling us that lack of access to testing for staff is a major barrier to them delivering services and achieving targets set to restore services.

'We seem light years away from the world-beating test-and-trace system that we were promised. Every week we wait for these problems to be resolved is a week of some NHS staff not being able to go to work, and a week that makes it harder to identify and contain Covid-19 surges.'

Mr Hancock is preparing to publish a 'priority list' within the next few days which will be used as a rulebook for testing centres in determining who is offered a swab. 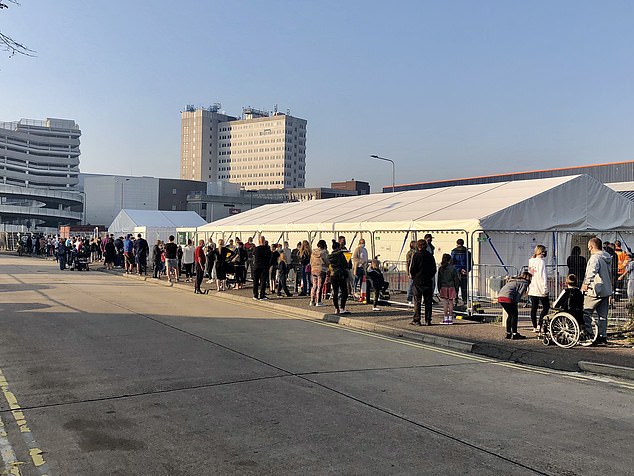 This was the queue at Southend's Covid testing site at 8am, as hundreds of people tried to get a test

Currently anyone, in theory, should be offered one regardless of whether they are a key worker or even have symptoms.

But the list will spell out to centres that if there are shortages of testing capacity, priority will be given to NHS and care home staff as well as to patients, key workers and school pupils. Anyone else faces being refused a test until the capacity is ramped up.

Ministers are also planning to open up two huge lighthouse labs to process test results. Seven are in operation – in Cambridge, Milton Keynes, Newport, Glasgow, Alderley Park in Cheshire, Loughborough in Leicestershire and Antrim in Northern Ireland.The increase in demand has been largely driven by schools going back as children spread coughs and colds. Anxious parents are booking the whole family in for tests to avoid lengthy self-isolation.

The surge in virus cases has sparked worry among the public, and ministers have claimed people are booking tests before going on holiday even though they don't have any symptoms. At the same time, experts believe testing capacity has been hit by a shortage of equipment and staff, including postgraduate students who have gone back to university.

Last night a leaked memo obtained by The Guardian claimed that the lighthouse labs were stretched to capacity even in late August.How - Page 20 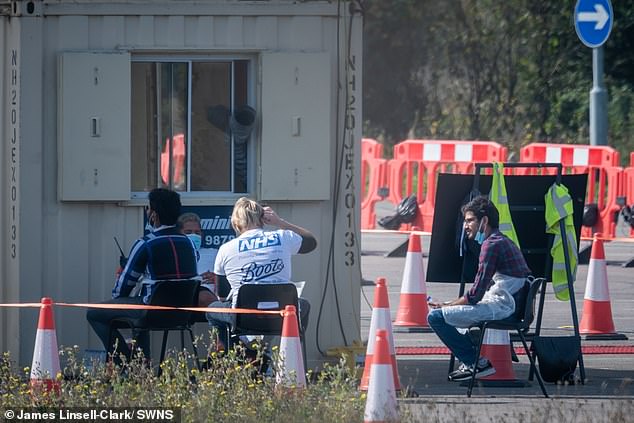 Testing in care homes must improve or there may be more deaths, England's care chief has warned.

Professor Martin Green said testing within the sector 'has gone backwards' with long delays to get tests and results.

The Government's pledge of weekly testing for staff and monthly testing for residents is not being met in many areas, he said, potentially allowing the virus to spread unchecked.

The warning comes as Health Secretary Matt Hancock vowed to put care homes at the front of the queue while announcing plans to ration coronavirus tests for those most in need. 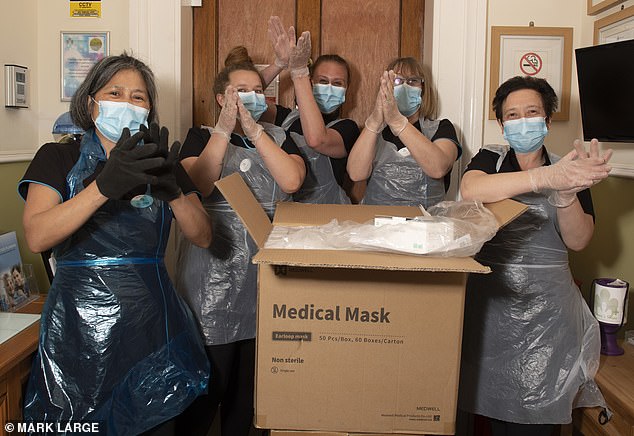 On the frontline: Staff at Shedfield Lodge care home near Southampton, which received a delivery of PPE from Mail-backed charity Mail Force, have struggled to get test results

The rise in coronavirus infections has seen cases creep up in care homes, with official figures showing 513 cases recorded in homes between August 31 and September 6.

Cases have mainly been among staff so far – but there are fears it could spread to residents, leading to more catastrophic fatalities.

'Don't keep children off with a cold'

Parents should not keep their children off school if they're likely to be suffering from a cold, a top doctor said.

GP Dr Sarah Jarvis said the average child gets up to 12 colds or viral infections a year. She suggested children would 'spend virtually no time' at school if they were kept off every time they had the sniffles.

But if children cough for more than an hour or have three or more coughing episodes in 24 hours, they should stay at home, she said.

'If they've just got a runny nose or sneezing but they haven't got a fever, haven't got a cough and they haven't got this change in sense of smell or taste then NHS 111 advises they don't need testing and the NHS website says the same,' she told Radio 4's World at One.

'Given we don't think it's likely they're going to have Covid, I would suggest you don't keep them off school if you wouldn't have done otherwise,' she said.

'Children get so many of these things every year that if we keep every child who has a runny nose off school then they will spend virtually no time there,' she added.

Earlier this week the Government wrote to care home providers in England to warn them of a rise in coronavirus infections within the sector.

The letter, from the director of adult social care delivery, urged bosses to 'take necessary action to prevent and limit outbreaks'.

It has led hundreds of homes to be closed to visitors again, just a month after re-opening.

Local public health officials are now directing whether visits should still be permitted, depending on infection rates in that area.

Professor Green, chief executive of Care England which represents independent providers of adult social care, said homes were desperate to allow visitors but had to 'balance the risk of bringing in Covid'.

'If we don't improve testing, there is a real risk of repeating deaths earlier this year,' he said. Testing has been frustratingly 'sporadic' according to the manager of Shedfield Lodge care home near Southampton in Hampshire.

The home, which received a vital batch of personal protective equipment in April from the Mail Force charity backed by this newspaper, has had no trouble getting hold of the kits.