MS-13 gang member who could 'face the death sentence over murder of a rival' was mistakenly RELEASED from a New York state prison and free for five days before FBI noticed Ever Morales-Lopez, 26, was released from Washington Correctional Facility in Comstock on September 3 for a 2018 conspiracy conviction  That came with a three-and-a-half to 10-and-a-half year sentence but he was granted early parole While in prison in July he was indicted in a federal case over the 2016 murder of rival gang member 20-year-old Kerin Pineda Morales-Lopez should have been transferred directly into federal custody this month to await trial However the FBI only realized he was free five days after he got out and it took them 12 hours to get him back in custody 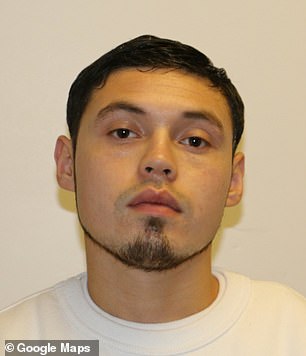 Ever Morales-Lopez, 26, was released from prison for five days on September 3

New York prison officials mistakenly released an MS-13 gang member facing a federal murder charge and it took five days to get him back behind bars last week.

Ever Morales-Lopez, 26, was granted early parole on September 3 for a 2018 conspiracy conviction that came with a three-and-a-half to 10-and-a-half year sentence.

However Washington Correctional Facility in Comstock, Nassau County were apparently unaware of a July federal indictment where he and seven other MS-13 gang members are accused of racketeering in six murders, two attempted murders and a kidnapping conspiracy.

Morales-Lopez is accused of keeping watch for cops while his fellow gang members hacked 20-year-old rival Kerin Pineda to death with a machete on May 21, 2016.

Pineda was believed to be a member of the 18th Street gang.

On that federal arrest warrant for murder in aid of racketeering, he could face either life in prison or the death penalty.

However instead of being transferred to federal custody to await trial, he was let go, the New York Post reported on Tuesday.

It was only on September 8