The armour worn by bushranger Ned Kelly and his gang 140 years ago might have been inspired by a Japanese samurai suit tucked away in a regional Australian museum.

The Kelly Gang famously wore suits of armour fashioned from ploughs when they went into their final battle with police at Glenrowan in north-east Victoria.

Ned's steel protective outfit attracted international attention after the gang's violent demise in a hail of bullets and fire and has become an iconic Australian image.

But exactly what inspired Kelly and his gang to wear armour and how it was made has been speculated on for more than a century.

Six years before the Glenrowan gunfight thousands of spectators had gathered at nearby Beechworth for a carnival which featured a colourful parade of costumes.

And among those to take part in that great November 1874 carnival was a Chinese gold miner wearing a samurai suit. 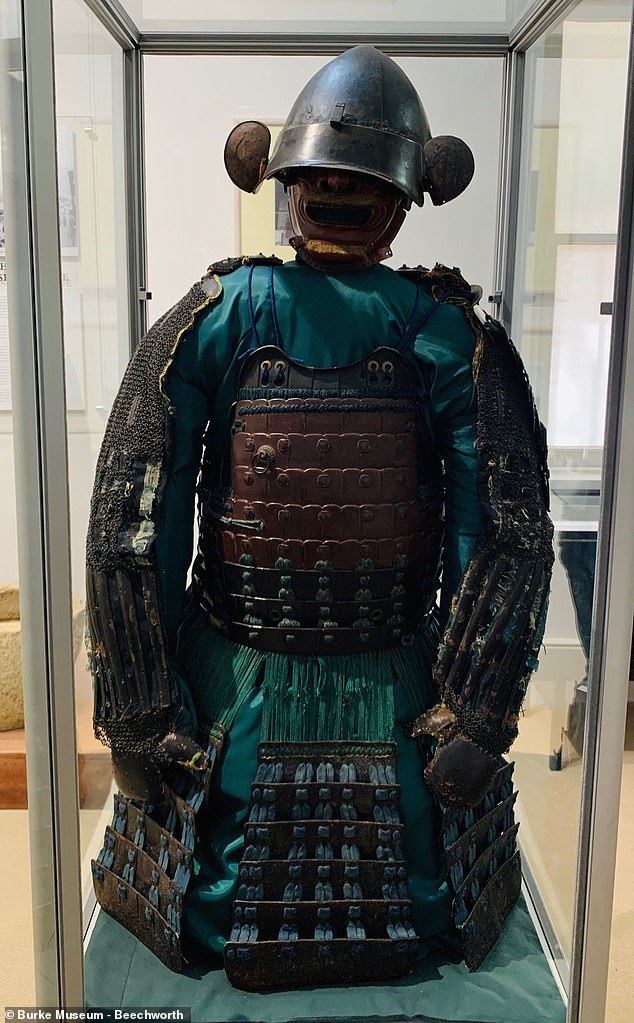 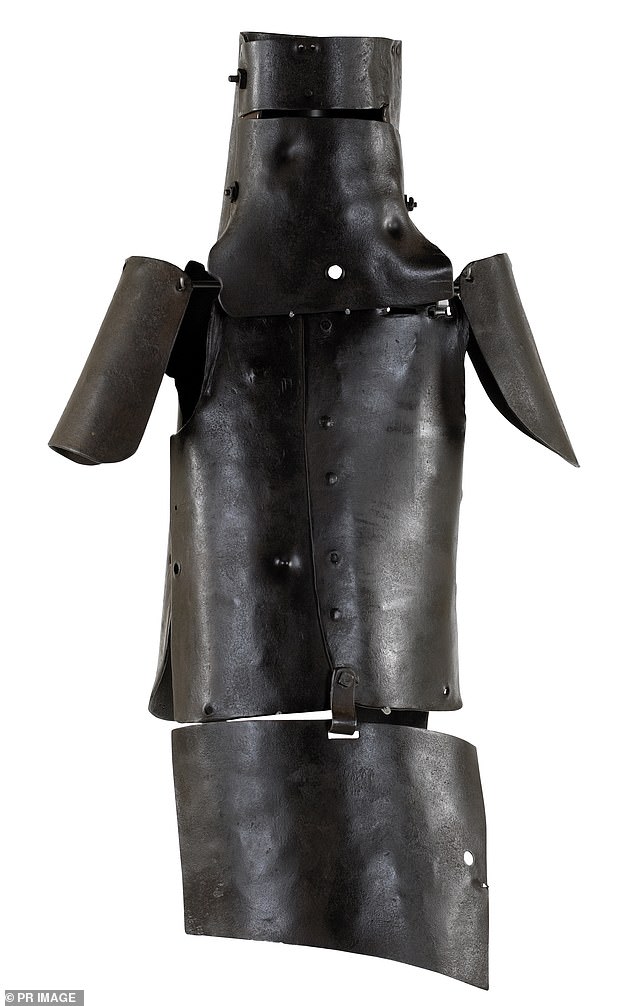 The Kelly Gang famously wore suits of armour fashioned from ploughs when they went into their final battle with police at Glenrowan in north-east Victoria. Ned Kelly's armour is pictured 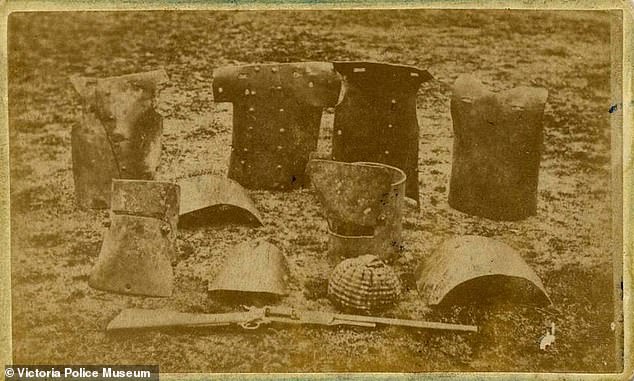 The Kelly Gang's armour protected the bushrangers' heads and torsos but not their lower arms and legs. Two suits of armour are pictured after the seige at Glenrowan in June 1880

The large local Chinese community had sent hundreds of pounds to their homeland to purchase banners, costumes and ceremonial weapons for the carnival the previous year.

That memorabilia, including the Japanese armour, arrived on the ship Onward at Port Phillip Bay from Hong Kong and travelled overland to Beechworth.

The samurai suit, from the Edo period (1603 to 1868), featured cylindrical breast plates, shoulder pieces and aprons, as did the armour Kelly wore at Glenrowan.

His best mate and future Kelly Gang member Joe Byrne was from Beechworth and would have been almost 18 when he likely attended the carnival.

Kelly himself could also have seen the Japanese armour as he lived in the same district, was not in jail at the time, and was a month shy of turning 20.

Byrne, a regular opium smoker, had many friends among the Chinese miners, was interested in their history and customs and could speak conversational Cantonese. 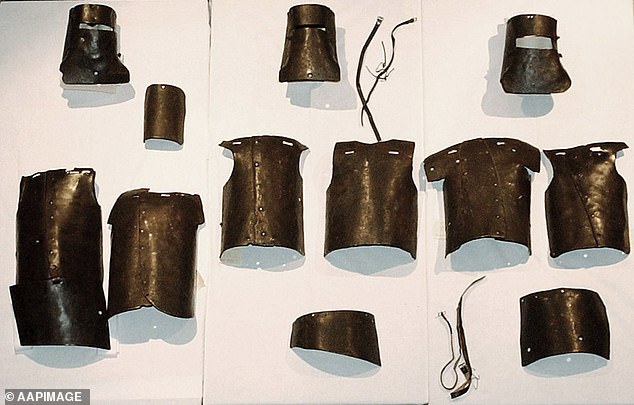 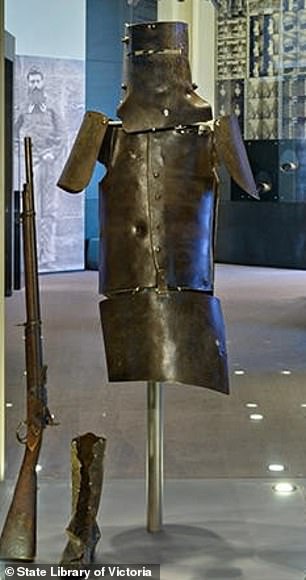 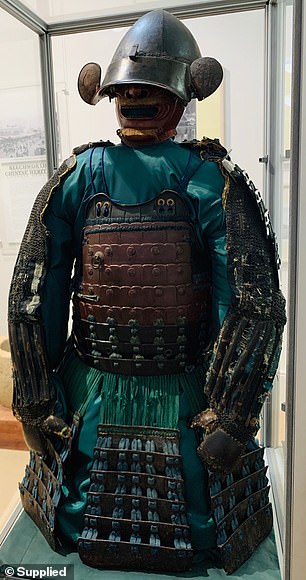 Police had found five bullet marks on Ned Kelly's helmet, three on the breast plate, nine on the back plate and one on the shoulder. His armour is pictured left. The samurai suit (right) has been held at Beechworth's Burke Museum since 1943

However, he was apparently not keen on Kelly's later idea to don armour for the gang's last stand at Glenrowan in June 1880.

The heavy armour - Ned's weighed 44 kilograms - protected the bushrangers' heads and torsos but not their lower arms and legs. Only Ned's suit had upper arm plates.

Byrne, Ned's brother Dan and fourth gang member Steve Hart all wore armour under their oilskin coats at Glenrowan and were killed during the gun battle with police.

'I always said this bloody armour would bring us to grief,' Byrne reportedly told Kelly during the siege.

Ned survived but was hanged on November 11, 1880. Police found five bullet marks on his helmet, three on the breast plate, nine on the back plate and one on the shoulder.

The samurai suit is now held at Beechworth's Burke Museum where guide Graeme McIntosh tells visitors it would have been widely noted at the 1874 carnival and remembered for years.

'We also know that Joe Byrne was friendly with many of the local Chinese because of his opium addiction and probably had ready access to the armour for close scrutiny,' he said.

Ned Kelly is pictured left shortly before he was hanged at Melbourne Gaol on November 11, 1880. Joe Byrne (pictured) was Ned Kelly's best mate and a well-read opium smoker

Thousands of Chinese miners came to Beechworth during the gold rush

Colonial prejudice meant the Chinese were not allowed to live in Beechworth.

Instead, the town had a permanent Chinese camp, temple, shops and a section of Beechworth Cemetery where some 2,000 Chinese were buried.

Towers built at the cemetery in 1857 were used by relatives and friends for burning paper money in memory of the dead.

Ian Jones, the late Kelly expert and author of the definitive biography Ned Kelly: A Short Life, believed Byrne had seen the Japanese suit, which he wrongly described as Chinese.

'Even though Joe didn't like the idea he may have helped design the suits - basing the body armour... on  a set of ancient Chinese armour imported for the Beechworth carnival of 1874... ' he wrote.

Tom Thompson is a historian who has described and verified Kelly memorabilia for leading auction houses and published three historical books on Ned.

'Joe Byrne was well read and literate,' Mr Thompson said. 'He had several Chinese friends from his early teens, so it is highly likely that Byrne was party to the 1874 Beechworth event. 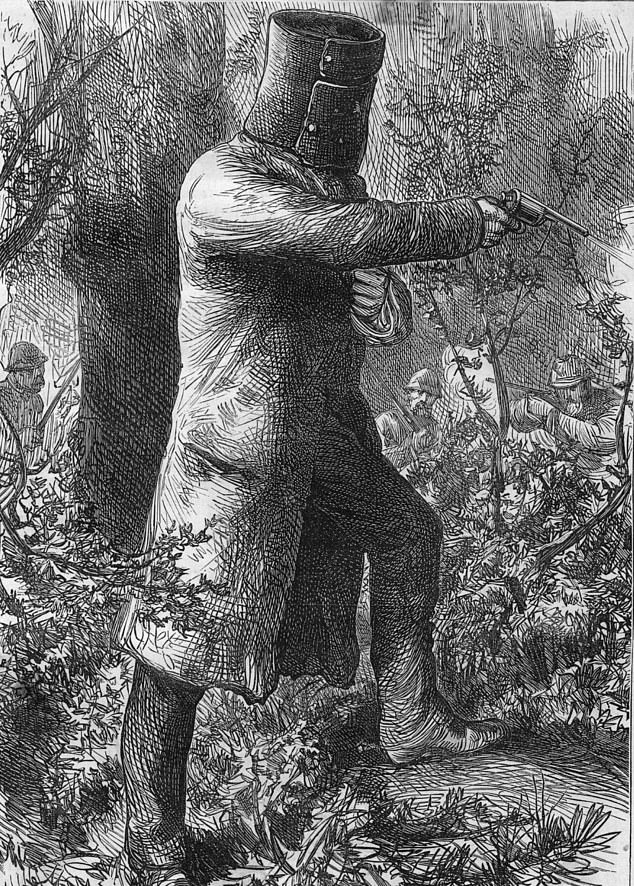