Three top public servants came under fire on the final day of the inquiry into Victoria's catastrophic hotel quarantine program. 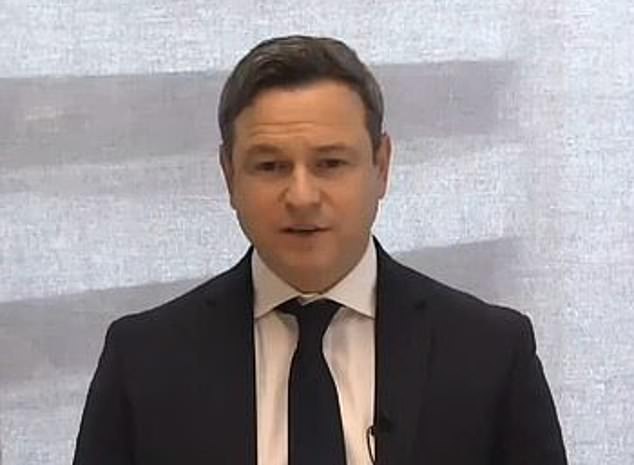 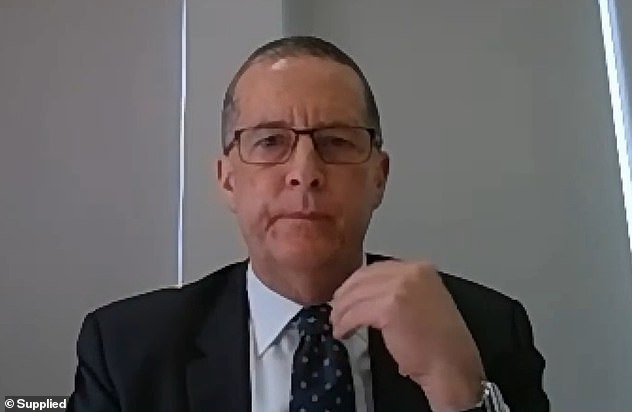 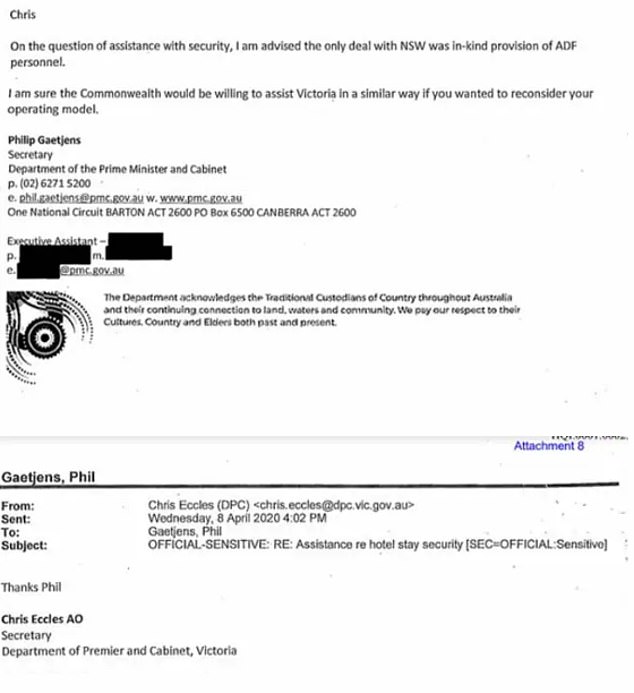 On April 8, Department of Prime Minister and Cabinet secretary Philip Gaetjens emailed his Victorian counterpart Chris Eccles to again offer ADF assistance. Mr Eccles replied: 'Thanks Phil' - but no request for help was made

On April 8, Mr Eccles got an email from the Prime Minster's office offering troops. He replied saying 'thanks' but Mr Ihle said there was no evidence he told the premier.

Counsel assisting Rachel Ellyard said: 'We do invite you to find that the offers of assistance made or available to be made to Victoria by the ADF should have been raised with the Premier, thinking particularly about the apparent availability of inclined personnel in early April.'

One was an email from Public Health Commander Finn Romanes about a 'risk to the health and safety of detainees'.

Ms Peake previously told the inquiry she did not tell Ms Mikakos because 'I was satisfied that the issues that had been raised had been addressed.' 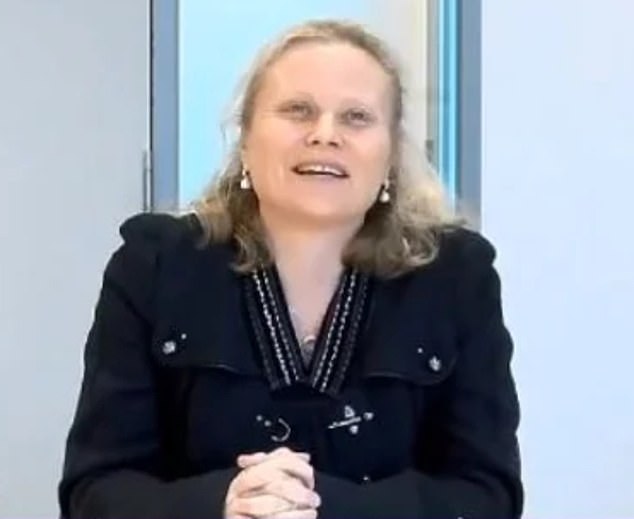 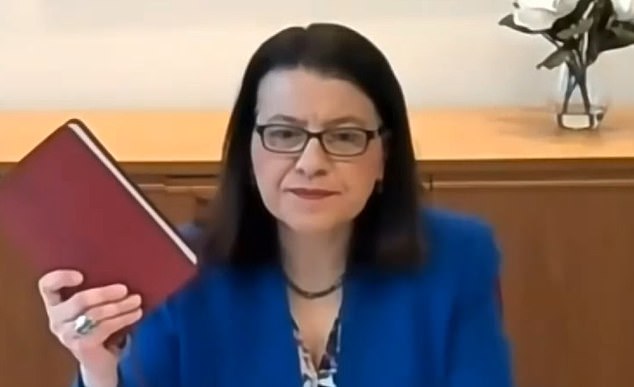 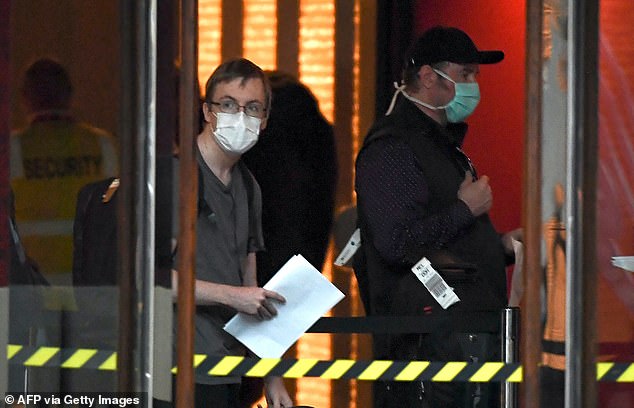 Pictured: A traveller returned from overseas is checked into an inner-city hotel in Melbourne on March 30. Lawyers at the inquiry said the program failed to meet its primary objective

The other issues were a suspected suicide and delay in transferring a sick detainee who was later admitted to intensive care.

Ms Peake referred the cases to healthcare quality body Safer Care Victoria but did not brief the minister on the outcomes of the reports because 'they had been addressed,' she said.

Mr Ihle on Monday said this was 'the deliberate and conscious decision to not inform the minister of an issue which is of significance falling within the minister's portfolio'.

Mr Phemister was mentioned after the inquiry heard that security companies were made responsible for making sure guards had infection control training.

Ms Ellyard said Mr Phemister should have consulted Jobs Minister Martin Pakula about this before the contracts were signed.

Mr Phemister previously told the inquiry he did not brief Mr Pakula because he did not have a detailed level of knowledge of the contracts.

Mr Pakula said ministers were not normally consulted on contracts.

Questioned about the public servants, Mr Andrews on Tuesday said he is confident they are 'acting appropriately'.

'I am aware of what the inquiry heard. I'm aware what submissions were led by counsel assisting yesterday. I'm indicating to you that I'm confident that those three public servants - indeed all public servants are acting appropriately,' he said.

Asked if he will resign, he said: 'I indicated the other day I don't run from challenges.

'I don't run from problems. I'm not someone who quits to avoid doing the hard work that needs to be done,' he said. 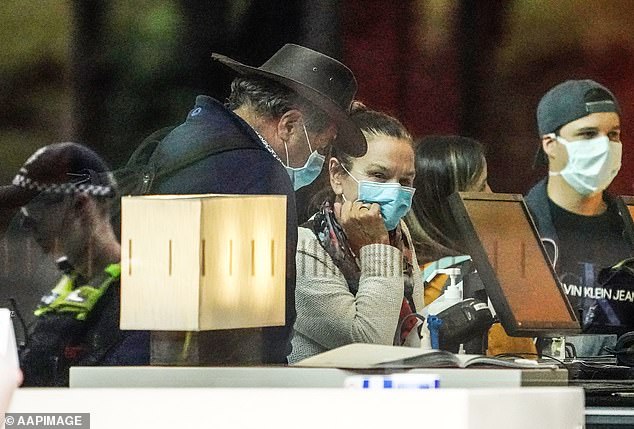 A report by free market think tank The Institute of Public Affairs claims Australia has ended up pursuing a coronavirus elimination strategy which will cost $319billion between 2020 and 2022.

That figure, equivalent to 23 per cent of GDP, is same as the cost of defence, education, health, and social security and welfare combined in one year.

The report says that a 'medical capacity' strategy to reduce Covid-19 infections so that hospitals do not get overwhelmed - rather than eliminate community transmission - would cost only $93.8billion.

Mr Andrews reportedly faced a backlash from some of his own Labor MPs after he told the inquiry on Friday that Ms Mikakos was 'accountable' for hotel quarantine.

'It has put a lot of people on edge,' an anonymous minister told The Herald Sun.

'He is a tyrant. He is a dictator with a capital D.I.C.K,' another said.

'He doesn't care about anybody but himself... I don't like the way she was treated.'

When asked about Ms Mikakos on Sunday, Mr Andrews said he had not contacted the former minister since her resignation.

Meanwhile, a report by free market think tank The Institute of Public Affairs claims Australia has ended up pursuing a coronavirus elimination strategy which will cost $319billion between 2020 and 2022.

That figure, equivalent to 23 per cent of GDP, is same as the cost of defence, education, health, and social security and welfare combined in one year.

The report says that a 'medical capacity' strategy to reduce Covid-19 infections so that hospitals do not get overwhelmed - rather than eliminate community transmission - would cost only $93.8billion.

Officially National Cabinet policy is to purse an 'aggressive suppression strategy'. But IPA researchers say this has amounted to elimination because the goal is no community transmission.

'Eliminating COVID-19 means eliminating jobs, freedom, and hope,' said Daniel Wild, Director of Research at the IPA and co-author of the report.

Asher Judah, IPA Associate and co-author. said: 'Governments must adopt an approach that recognises that we must learn to live with the virus.

'Otherwise, economic, social, and recreational life should return to normal, with social distancing observed as needed.'

GOVERNMENT HAD NO PLAN

* Public servants were given just 36 hours to set up the program.

* There was no suggestion those who set up the program worked other than with 'the best of intentions and to the best of their ability'.

* 'Bad faith or corruption is not what the evidence shows.' 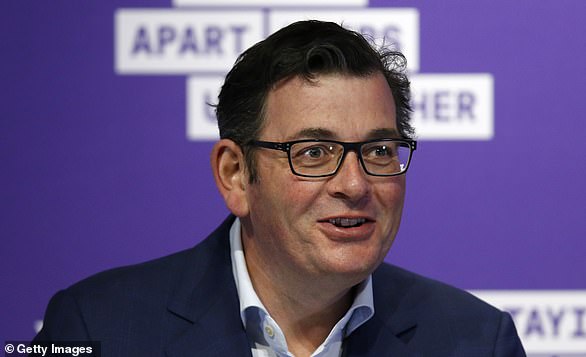 DHHS WAS IN CONTROL

* The Department of Jobs, Precincts and Regions played a substantial role but the Department of Health and Human Services was the control agency responsible for the program.

BRETT SUTTON SHOULD'VE BEEN IN CHARGE

* It was wrong to appoint people without public health expertise as the state controllers of the pandemic in February as it 'influenced the way in which DHHS subsequently understood and acted on its responsibilities'.

* 'Had the chief health officer or another person with public health expertise been appointed state controller ... they would have had direct oversight of the hotel quarantine program and been able to directly influence the model of that program.'

NO ONE PERSON MADE THE DECISION TO USE SECURITY GUARDS

* 'It can be best understood ... as a creeping assumption or default consensus reached in the state control centre after the preference of Victoria Police was known.'

POLICE HAD PREFERENCE FOR GUARDS

PREMIER SHOULD HAVE BEEN TOLD ABOUT ADF OFFER