Victorian Premier Daniel Andrews is facing growing criticism within his party over the state's COVID-19 response but his leadership of the 'election-winning machine' is not under threat according to Labor insiders.

Mr Andrews has faced numerous calls to resign in the wake of the coronavirus but sources says with no alternative leader yet emerging he is unlikely to be challenged for the top job.

Health Minister Jenny Mikakos sensationally resigned from her position on Saturday after Mr Andrews told an inquiry she was 'accountable' for the state's doomed hotel quarantine program which has been linked to numerous deaths.

Ms Mikakos is the fourth minister the under-fire premier has lost in barely three months - after three other high-ranking Labor politicians were stood down or sacked over branch-stacking allegations which emerged in June.

The premier's list of detractors in the party is growing according to sources - particularly in Victorian Labor's right-wing faction - who believe he made Ms Mikakos a scapegoat, but he is likely to survive the pressure. 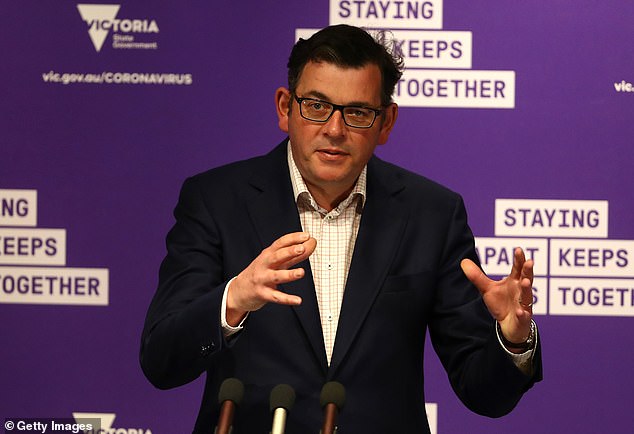 Victorian Premier Daniel Andrews on Wednesday. Sources inside the state's Labor Party have claimed while criticism of the under-fire leader is growing in the party room, the opposition has not yet reached 'critical mass'

Ms Mikakos resigned from parliament altogether and took a parting swipe at the premier as she claimed in a statement her integrity had been 'undermined'.

Mr Andrews won re-election as Victorian premier in November 2018 in a landslide victory, but a MediaReach poll earlier this month said the Liberals were now well ahead with 61.2 per cent of the vote on a two party-preferred basis.

But an MP on the party's right said the number of voices critical of their premier was still not enough to force through a leadership change, The Age reported.

'There’s a few more people in the disgruntled camp today than there was 12 months ago,' the Labor MP said. 'It’s got a bit more volume, but nowhere near critical mass.'

A left-leaning MP inside Labor's Victorian branch said while anger was growing over Mr Andrews' response to the pandemic, his opponents had put forward no alternative for who should lead the party.

PREV 5,000 pets including rabbits, cats and dogs are found dead at a depot in China
NEXT Troubled girl, 16, takes her own life on school grounds