Mr Fitzsimmons is the new charity patron of children's mental health organisation KidsXpress, which aims to minimise the impact of childhood trauma.

The father-of-two was praised for his empathy and calmness while leading the RFS through the devastating 2019/20 bushfire season before stepping down in April.

He is now the head of Resilience NSW, a new government agency focused on disaster preparedness and recovery approach.

Speaking to Daily Mail Australia, Mr Fitzsimmons said he was 'humbled' to be the charity patron for KidsXpress. 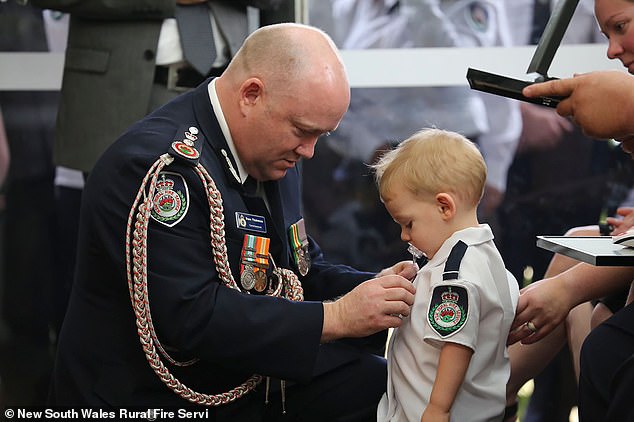 NSW RFS Commissioner Shane Fitzsimmons (left) pins a medal on Harvey Keaton (right) after his father Geoffrey Keaton killed in the bushfires. With first-hand experience of trauma in children, the former commissioner is now the charity patron for KidsXpress

'Children are our most valuable asset, they're also the most vulnerable in the community and they're our future and tomorrow,' he said.

'So to be invited to an organisation that's dedicated and devoted to improving the lives of children is a truly special thing to be a part of.'

The former RFS commissioner saw first hand how the bushfires traumatised children and has noticed similar patterns of loneliness and isolation amid the pandemic.

'NSW has been on its knees with drought, we had the biggest bushfires in the history in the state, we saw floods and now COVID has affected all of us,' he said.

'People in rural NSW have been affected by all four of those disasters.