The Proud Boys is a far-right fraternal organization that was founded on the idea that white men and western culture are under siege and champions being 'anti-political correctness' and 'venerating the housewife'.

The group has been known to promote and engage in political violence as they push their pro-gun, anti-feminist, anti-immigration and anti-welfare. The group maintains that it is not racist despite incorporating elements of the 'white genocide' conspiracy theory into its core tenets.

The Proud Boys were classified as an extremist group with ties to white nationalism by the FBI, while the Southern Poverty Law Center (SPLC) lists them as a hate group and the Anti-Defamation League describes them as misogynistic, Islamophobic, transphobic and anti-immigration.

The group has a history of street violence targeting left-wing and anti-fascist activists and protest movements. In the past few months Proud Boys have repeatedly dropped in on Black Lives Matter demonstrations taking place across the country, sparking violent clashes on several occasions.

Proud Boys founder Gavin McInnes is quoted as saying in 2015: 'I want violence, I want punching in the face. I'm disappointed in Trump supporters for not punching enough.'

The organization made headlines this week after Donald Trump refused to condemn their associations with white supremacy during his first 2020 presidential debate against Joe Biden on Tuesday night. 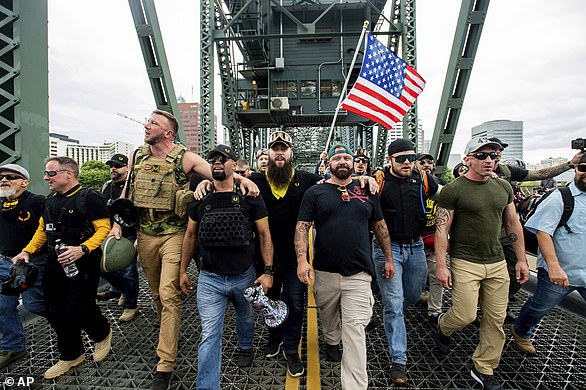 The Proud Boys is a far-right fraternal organization that was founded on the idea that white men and western culture are under siege and champions being 'anti-political correctness' and 'venerating the housewife'. Members of the group are seen marching across the Hawthorne Bridge during a rally in Portland, Oregon, on August 17, 2019

British-Canadian activist and Vice Media co-founder Gavin McInnes founded the Proud Boys in the months leading up to Donald Trump's election to the presidency in 2016.  McInnes started the group as a joke in the far-right Taki's Magazine, adopting its name from the Aladdin song Proud Of Your Boy.

McInnes and the Proud Boys have described the group as a politically incorrect men's club for 'Western chauvinists' and deny affiliations with far-right extremist groups that overtly espouse racist and anti-Semitic views.

In February last year, McInnes sued the Alabama-based SPLC, claiming he was banned from social media platforms and saw his livelihood suffer after the organization branded the Proud Boys as a hate group.

'What they [the SPLC] do is they cast this wide net of "everyone's a Nazi" and they start destroying lives,' McInnes said at a news conference announcing his lawsuit. 'This is a free speech nation, and this is not a free speech organization.'

Richard Cohen, president of the Southern Poverty Law Center, responded to the suit by saying: 'Gavin McInnes has a history of making inflammatory statements about Muslims, women and the transgender community. The fact that he's upset with SPLC tells us that we're doing our job exposing hate and extremism.'

McInnes has since worked to distance the group from the alt-right, describing members as 'Western chauvinists' and denying affiliations with far-right extremist groups that overtly espouse racist and anti-Semitic views.

Enrique Tarrio is currently serving in the role of chairman for the Proud Boys. 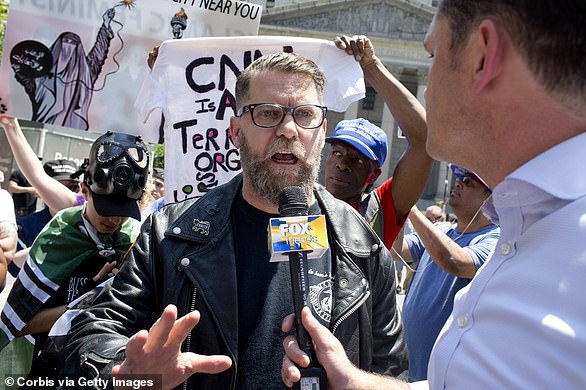