Patients who were told by their GPs to get a Covid test 'have been turned away at testing sites' even when there is enough capacity due to lab processing problems.

Up to 200 people a day were refused a test at a centre in Stoke after Whitehall officials limited the number they could administer.

Officials there said even people who were referred by their family doctor were told they could not be tested when the quota had been reached.

Meanwhile some sites are working at just a fifth of their capacity as testing laboratories struggle to process the results.

It comes as more people than ever are having to wait three days or more to find out if they have coronavirus after an in-person test in England. 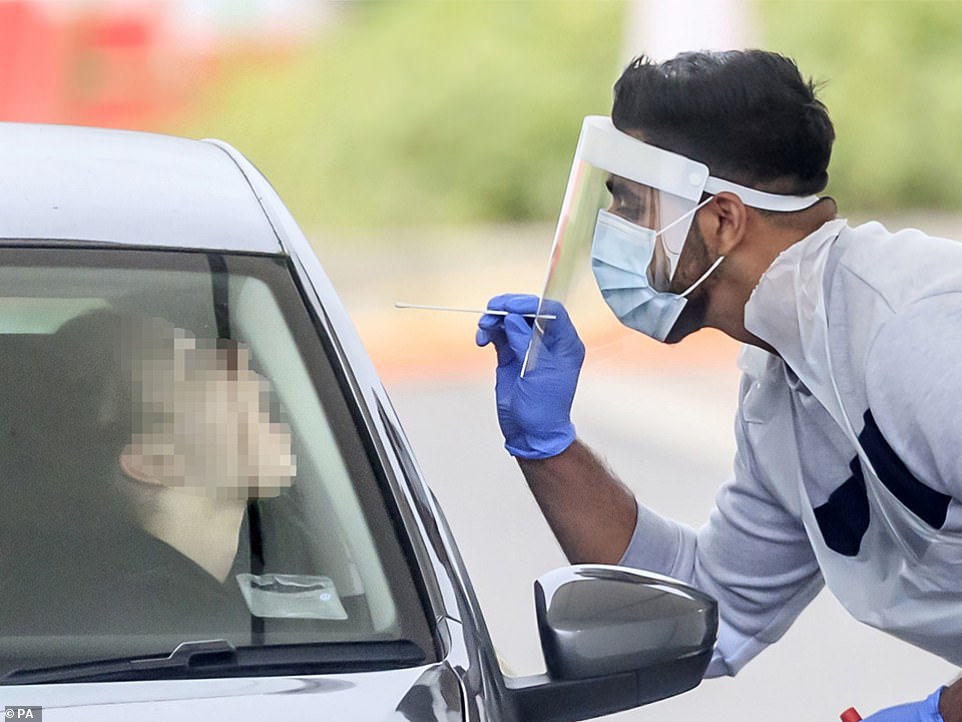 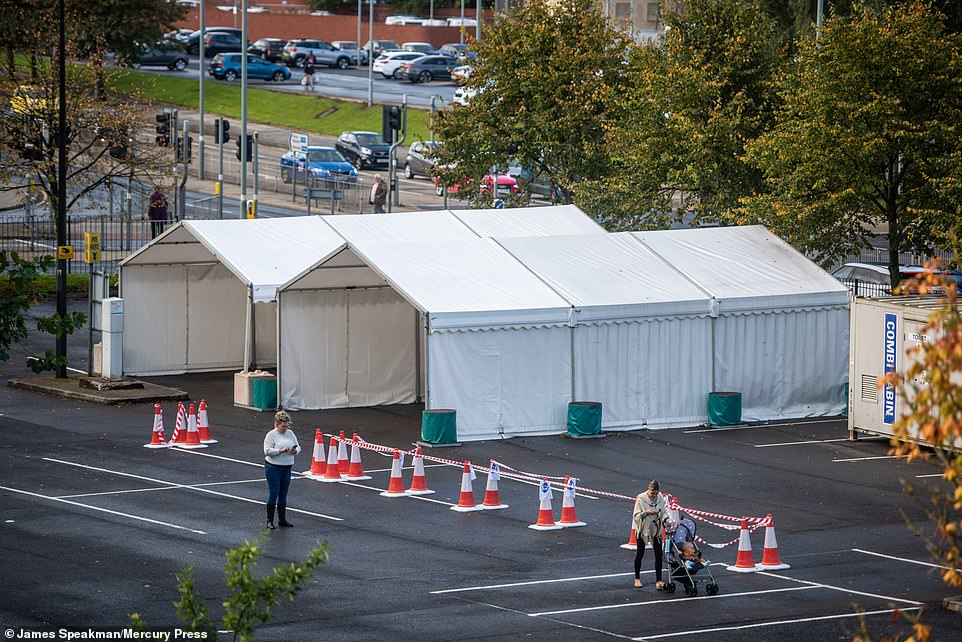 Some sites (pictured, Burnley) are working at just a fifth of their capacity as laboratories struggle to process the results 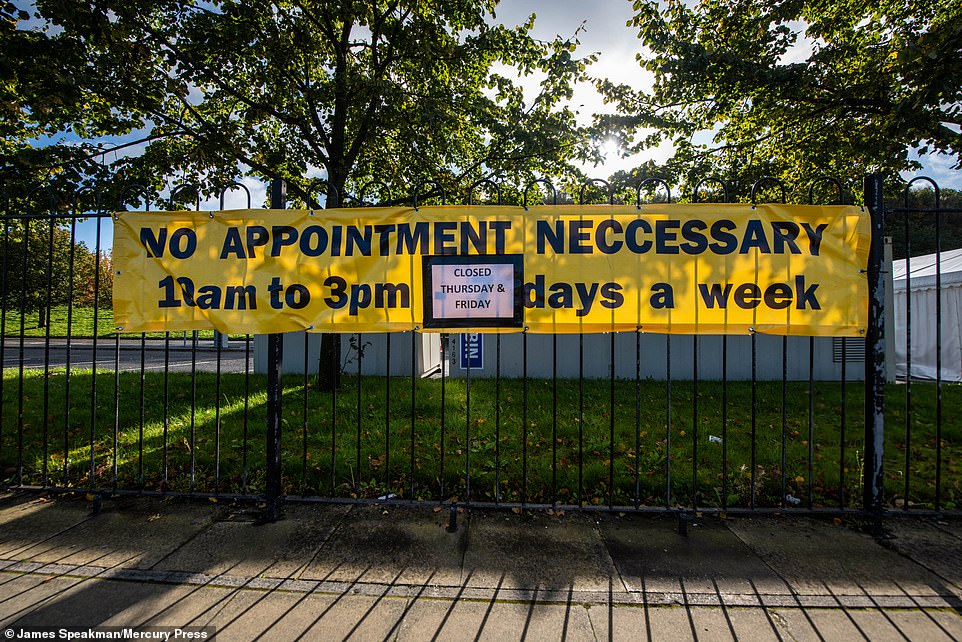 More people than ever are having to wait three days or more to find out if they have coronavirus after an in-person test in England (pictured, the Burnley testing site) 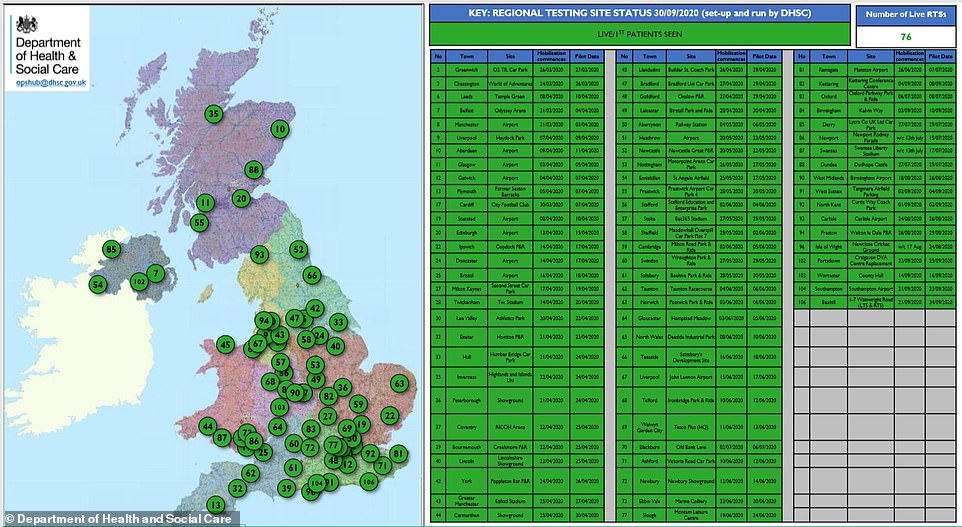 The Stoke site saw swathes of people being turned away because only a few who did not book online could be tested.

A super-lab expected to process 50,000 tests a day has had to delay opening.

The site at Charnwood near Loughborough, which is one of the 'Lighthouse laboratories', will not open for at least another month.

The labs are at the focus of the government's plans to ramp up testing and processing the results.

The Department of Health and Social Care had bragged in a press release last month the lab would be open 'by the end of September'.

But the site has no workers and those interviewed were told they will not be needed until at least the last week of October, according to the Times.

Meanwhile another Lighthouse lab in Newport is also yet to open after being earmarked for August but likely to only open this month.

Public Health Wales pointed the finger at recruitment problems and not enough tests to check the lab's processing works.

A Department of Health spokesman said: 'NHS Test and Trace is providing tests at an unprecedented scale — 240,000 a day on average over the last week — more than all major countries in Europe with more testing per head of population.

'We are expanding testing capacity rapidly with new Lighthouse laboratories in Newport, Newcastle, Bracknell and Charnwood as we drive towards our target of 500,000 a day by the end of October.'

One member of staff told the Times: 'Sometimes when we get to that threshold — ie the maximum even if they came with that GP letter, we couldn't let them in.'

Another said if a family came with a sick child 'you really should say ''well I appreciate that I can see he's not particularly well, have you tried booking a test on the internet''?'

They added even if the person claimed to have been trying for a test for three days they should be turned away.

The Stoke site was performing 500 tests a day a one point, but are now following a quota.

On one day last week just 100 people were tested by 5pm, with 260 the following day.

Whitehall's cap at testing sites - which started last month - appears to be reflected across the system as social media users also reported being turned away from sites.

Liz Martin from London tweeted: 'Tests are unavailable and people are being turned away. I couldn't get one recently even as a key worker.'

Barking and Dagenham Council posted: 'We've been told covid testing sites in B&D are really busy with only a few walk in slots available daily.

'Don't get stuck in a queue or waste your time walking down there, only to be turned away - you're best to book online or call 119.'

Another account wrote: 'I've had at least 4 different people tell me the same story where someone they know has gone to a testing centre, given their details and then is turned away because it's ''too busy''.

'One week later, they all get a letter saying they're positive for Covid. No swab was ever taken.'

Canary Wharf counsellor Andrew Wood added: 'Serious problems at Watney COVID testing centre I observed a number of people being turned away as had not booked in advance I asked the nice security guard how many he had to turn away (30% he said).

'He said and GPs were telling people incorrectly that they could just turn up and be tested.

'He was telling them to go online Somebody has to put up a poster reminding people how to book including calling 119 outside to help him and give the security guard a proper mask (security guards have one of the highest infection rates in the country).'

Mike Stripling from the East Midlands commented: 'Felt the full frustration of the covid testing facilities today. 10 people with full Poe doing SFA. my wife booked app this am for 3.30 got there after 1.5 hours of traffic to be turned away. Pathetic!'

Another man from Brighton posted: 'People being turned away from the mobile testing centre in Brighton - they had a QR code for the nearest test centre they could get in ABERDEEN! Staff couldn't help though...and had to tell them to go back to the online booking system.' 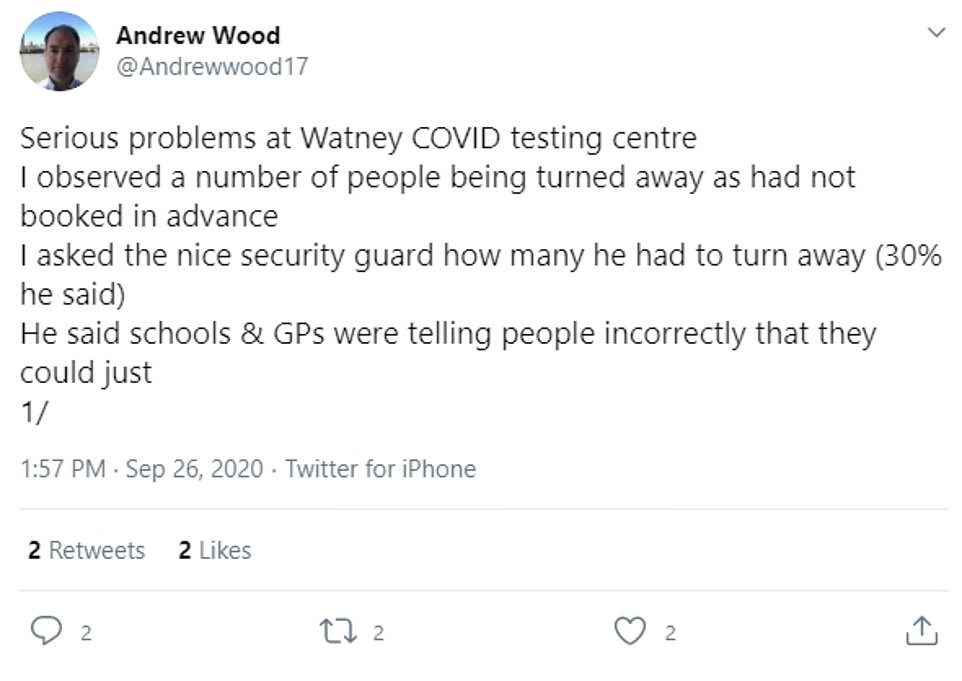 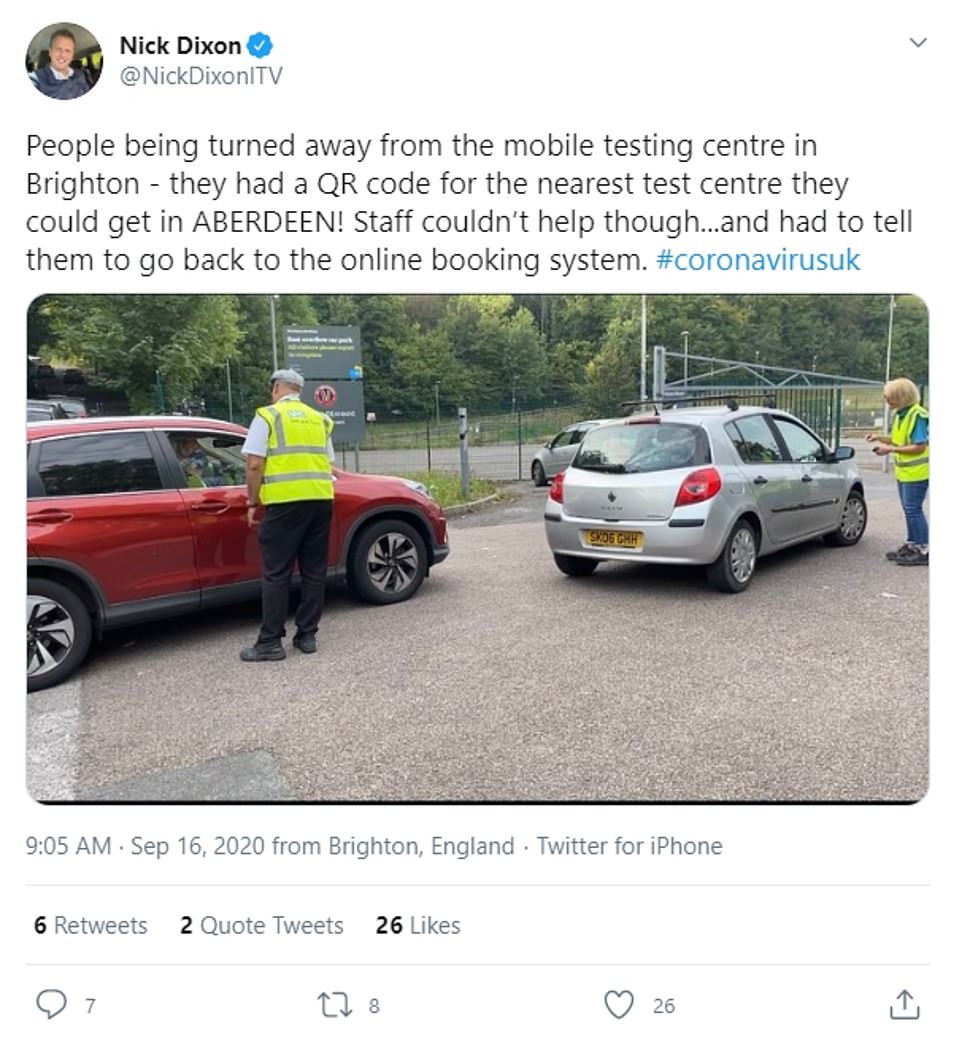 The cap on testing capacity is reportedly being used to relieve pressure on the floundering Lighthouse labs.

One of the network's new sites in Charnwood,