A ranger station in California's Sequoia National Forest has been completely covered in a wrap that looks like aluminum foil like 'a big baked potato' to shield it from nearby blazes as more than four million acres have been burned across the state this wildfire season.

On Wednesday photos of the wrapped up Kern Canyon Ranger Station were shared on Facebook by the US Forest Service as the SQF Complex Fire raged nearby, 85 miles south of Fresno.

The wood cabin, located on the Kern River, was practically unrecognizable, covered from top to bottom in a fire resistant material called structure wrap that is made out of aluminum.

Structure wrap can be used to cover anything including roofs, stairwells and other structures and it is sold online by Firezat in rolls 5 feet wide by 300 feet long for $879.

'The main structure stood tall in the center of the clearing, sparkling and reflecting the sunlight,' a firefighter wrote on covering the cabin in the Facebook post. 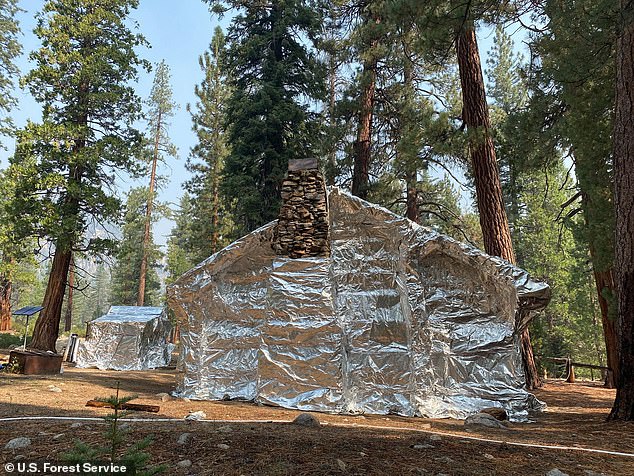 The US Forest Service shared photos of the Kern Canyon Ranger Station in the Sequoia National Forest on Wednesday, showing the cabin completely covered in structure wrap, which is a fire resistant material that looks like tin foil 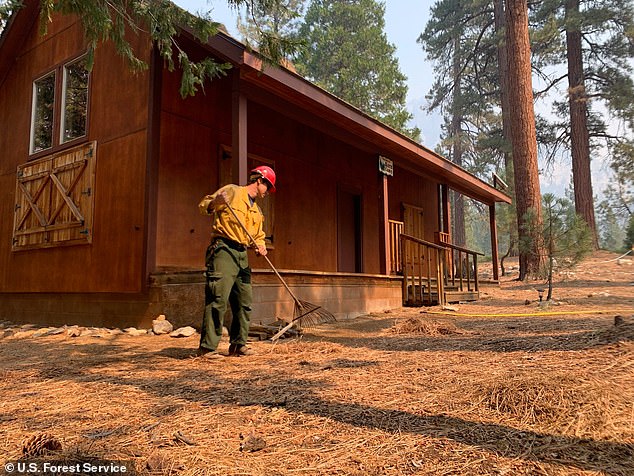 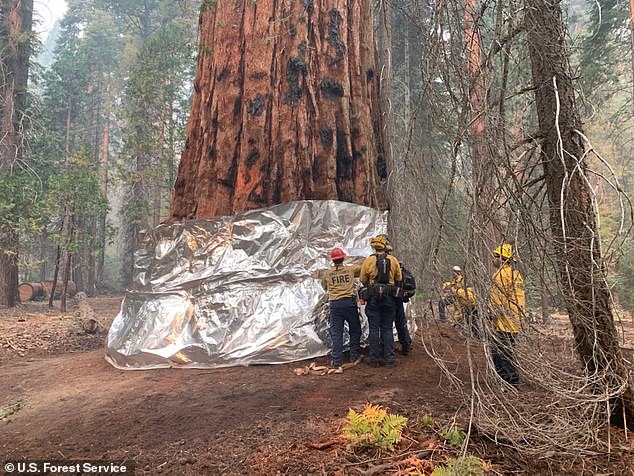 The same structure wrapping was used to save some famously large trees in the forest, including the G. W. Bush Sequoia Tree in Freeman Creek Grove, officials said. That area is known for having some trees that are 15 to 20 feet in diameter

'A truly incredible sight. It had been entirely wrapped and secured in structure-wrap (similar looking to aluminium foil).'

'Only a few more areas needed wrapping and as my crew mate and I finished the job, I couldn’t help but to feel like I was wrapping Christmas presents for my family. Each piece wrapped tight and secured with way too much tape, as my mother would say,' the firefighter added.

One team of firefighters spent two weeks trying to shield the station from the SQF Fire, that continues to burn, now spanning 158,058 acres. As of Monday it is 65 percent contained.

The same structure wrapping was used to save some famously large trees in the forest, including the G. W. Bush Sequoia Tree in Freeman Creek Grove, officials said.

PREV Manchester is Britain's Covid-19 capital and only NINE authorities saw ...
NEXT Troubled girl, 16, takes her own life on school grounds

Richmond star Jack Riewoldt was laying flat on his back and looked out of the ...