A shouting match erupted outside a luxury hotel-turned-homeless shelter on Manhattan's Upper West Side as protesters supporting the 300 homeless men clashed with neighborhood residents demanding they be relocated.

The Lucerne Hotel has been steeped in controversy for weeks since New York City moved roughly 300 homeless men into its empty rooms in an effort to stem the spread of coronavirus.

The scheme polarized the community as some residents have complained that the decision brought rampant drug use and lewd displays to their streets.

Last week the city's Department of Homeless Services announced that the men would be transferred to another hotel near Wall Street - drawing from the homeless advocates.

Dozens of demonstrators gathered outside the Lucerne on Sunday to show their support for the homeless living there when members of the opposing group arrived to shout them down. 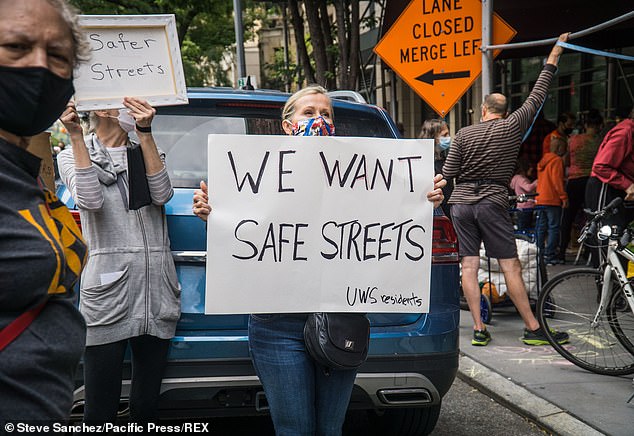 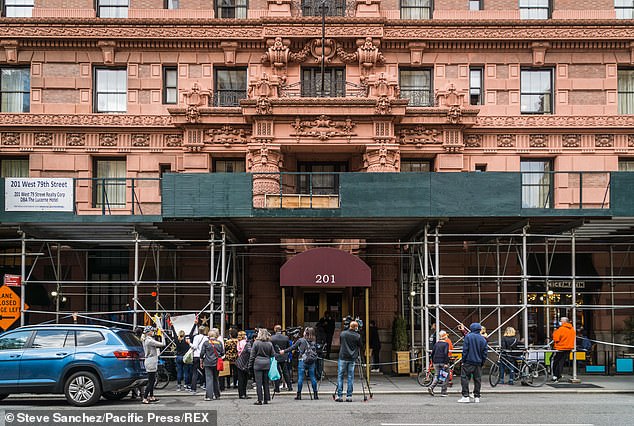 The Lucerne Hotel has been steeped in controversy for weeks since New York City moved roughly 300 homeless men into its empty rooms in an effort to stem the spread of coronavirus. Homeless advocates gathered outside the building on Sunday to show support (pictured) 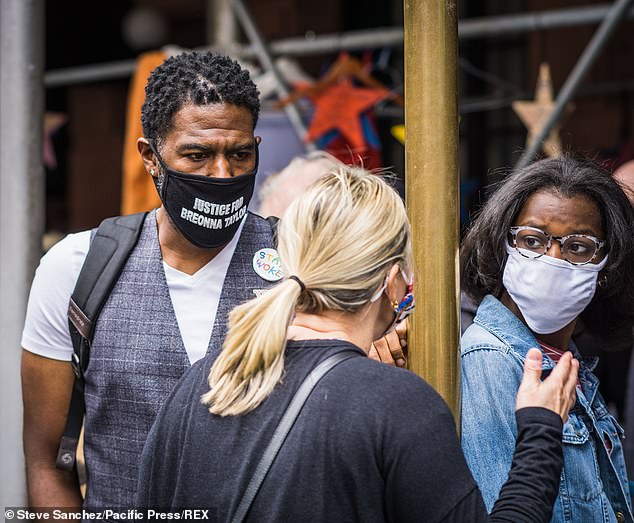 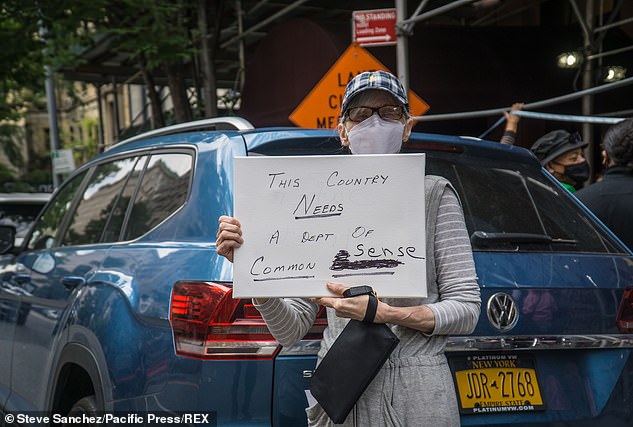 A critic demanding that the homeless be removed from the Lucerne holds a sign that reads: 'This country needs a dept of common sense' during Sunday's demonstration

The supporters, led by city Public Advocate Jumaane Williams, New York State Assemblymember Linda B Rosenthal and the UWS Open Hearts initiative, convened at the hotel on West 79th Street to wrap a blue 'ribbon of love' around the building.

Many held signs with messages of kindness, such as 'Love your neighbor' and 'Homelessness is not a crime'.

As Williams addressed the crowd he was interrupted by opponents with their own signs bearing phrases including 'We want safe streets' and 'This country needs a dept of common sense'.

Addressing Williams directly, one woman said that the men were placed in the hotel under an executive order by Mayor Bill de Blasio that was supposed to be temporary, suggesting that they had overstayed their welcome.

'The people that are living here need help and support,' the woman said.

'Where should they go?' Williams asked.

'They could have gone to the Javits Center,' the woman replied, prompting another supporter to question: 'Why don't you go somewhere?'

That was one of several heated exchanges that unfolded over the course of the gathering - one of many staged outside the hotel in the past month.

'I believe people to be sincere when they say they actually care about the people. They just don't want them in the site that they were placed,' Williams said on Sunday.

'I'm sorry, that is actually the definition of NIMBYism.' 'NIMBY' stands for 'Not In My Backyard'.

Larry Thomas, a 59-year-old who has been living at the Lucerne shelter since July after getting out of prison, also spoke to the crowd.

'I want to live like you all,' Thomas said. 'If I can even diffuse the situation, I'm on the front lines to diffuse it. Let's get together and help each other. Because in a way that's all we got, is us.' 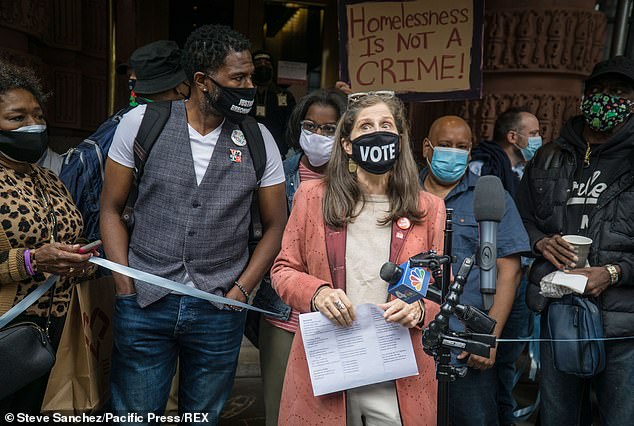 The supporters, led by city Public Advocate Jumaane Williams (second left), New York State Assemblymember Linda B Rosenthal (center) and the UWS Open Hearts initiative, convened at the hotel on West 79th Street to wrap a blue 'ribbon of love' around the building 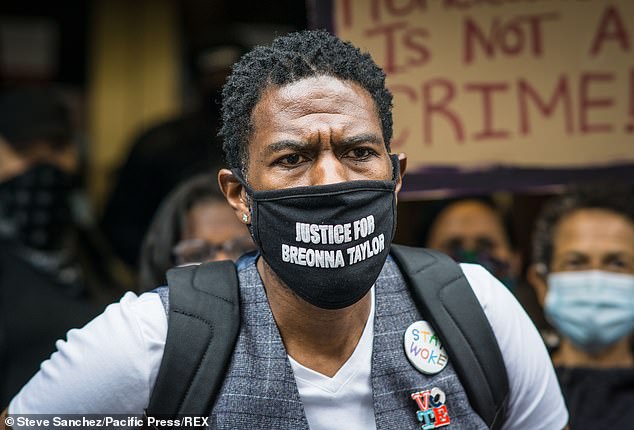 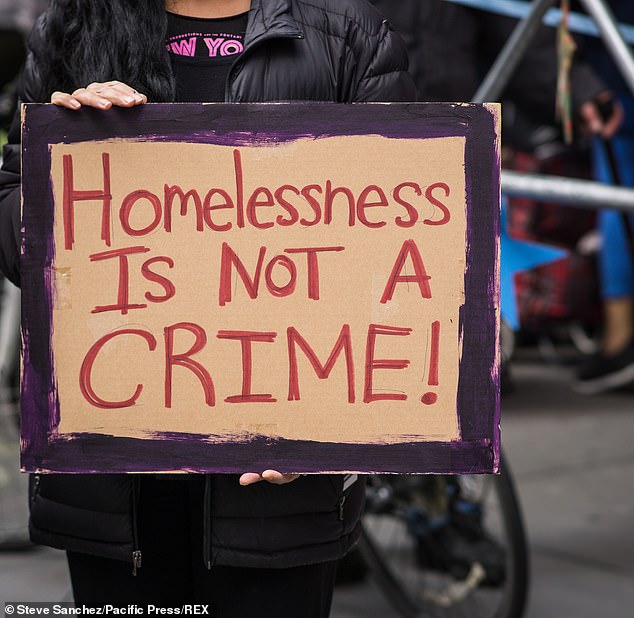 Supporters held signs with messages of kindness, including 'Homelessness is not a crime!' 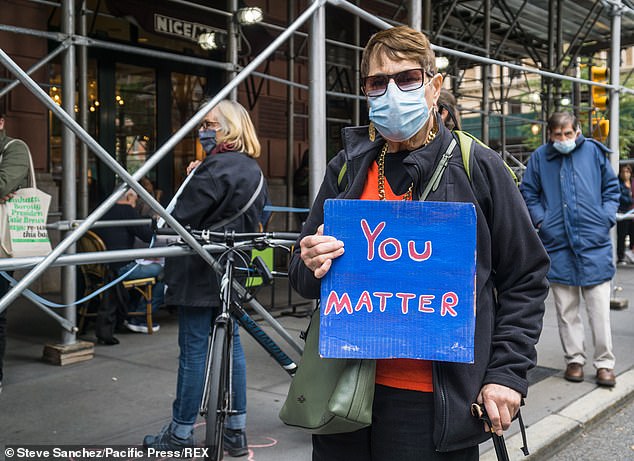 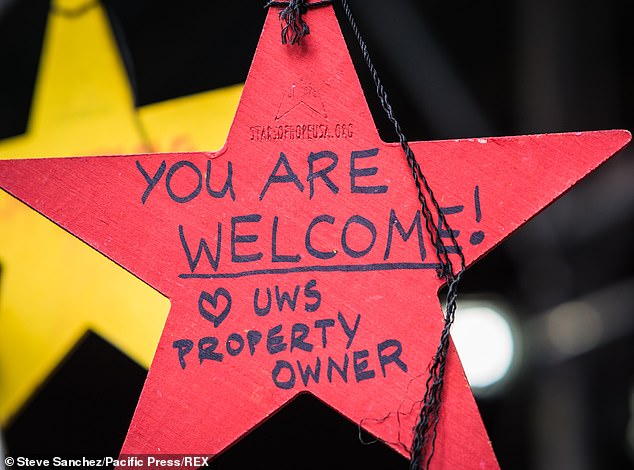 Over the past month Mayor de Blasio has gone back and forth about how to address backlash surrounding his decision to place some 13,000 of the city's homeless population in hotels that were

PREV U.S. reports about 300,000 more deaths than usual during pandemic - CDC
NEXT Troubled girl, 16, takes her own life on school grounds