The bodies of three workers who perished when a stairwell at a Houston construction site collapsed will not be recovered until the structure is deemed safe to enter — and that might take several days, fire officials said.

The collapse happened around 1:30 p.m. local time Monday in a 15-story skyscraper, set to become the headquarters of Marathon Oil when it opens. An interior concrete stairwell collapsed, starting at the 13th or 14th floor.

A fourth worker was listed in stable condition after being injured in the collapse and taken to a local hospital, said the Houston Fire Department.

As of Tuesday officials are awaiting word that recovery crews can safely enter the structure to recover the three bodies from the rubble. 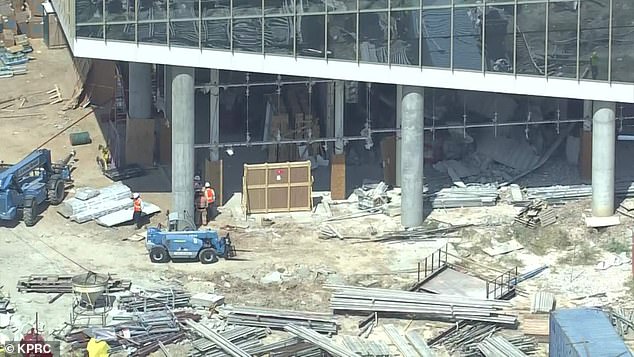 The building, which was under construction, is near the intersection of Interstate 10 and the Beltway in west Houston 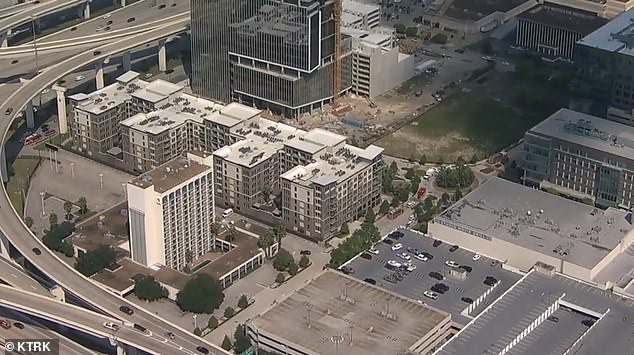 The 15-story skyscraper where the bodies of three workers are stuck is part of Marathon Oil's One MRO project building, which is expected to serve as the Houston-based company's headquarters

'All we know is they were working in or around that stair area, and they are currently in the debris field, unable to be recovered because of the instability of that structure,' said Assistant Fire Chief Ruy Lozano.

'It is far too early to determine what's the structural cause,' he said. 'But I can tell you anytime there's a primary collapse, our biggest concern is a second collapse.'

'That's why we're not permitting any other rescuers until we can confirm the stability of the structure.'

A fire department captain said the recovery plan involves a crane that will remove large chunks of the collapsed stairwell through openings in the roof of the structure, according to Click2Houston.com.

Workers had just returned from their lunch break Monday afternoon when a troubling noise erupted.

'Out of nowhere I hear a loud banging sound, and it sounded like a building was collapsing,' construction worker