Shocking moment 'sixth form student' runs at car while brandishing machete outside south London college before bystander tries to disarm him as two 16-year-old boys are arrested Police rushed to the sixth-form college in Woolwich around midday on Monday  Footage shows boy hitting side of a red car with the blade before it drives away Two 16-year-old boys have been arrested and both remain in custody, say police

This is the shocking moment a 'sixth form student' runs at a car while brandishing a machete outside a south London college before a bystander tries to disarm him.

Footage shows a group of students standing nearby while the man hits the side of a red car with his weapon before it drives away.

The Met Police confirmed today that two 16-year-old boys have been arrested on suspicion of affray and both remain in custody. 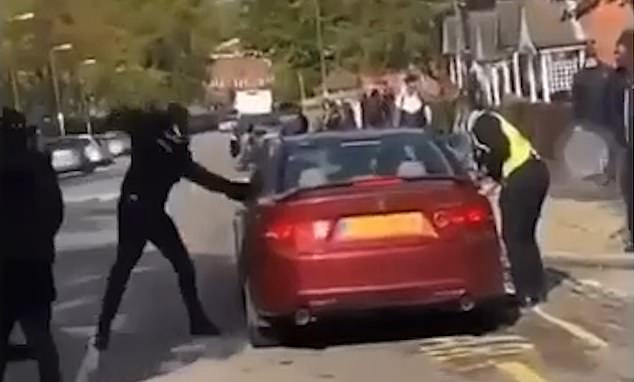 Footage shows a a boy hitting the side of a red