A Business minister today defended the Government's claim that 30 per cent of all coronavirus transmissions are occurring in pubs, bars, cafes and restaurants after furious MPs accused ministers of 'cobbling together' numbers to 'justify' their point of view based on flimsy data from fewer than 100 pubs.

Nadhim Zahawi MP argued the sample was 'quite representative' on LBC breakfast this morning, stating that when he did business surveys they would use a similar number of venues.

His claim comes as enraged MPs slam the Government for presenting the 'early analysis' figures to them, and criticise officials decision to rely on a three-month-old American study from which they cherry-picked the figures to bolster their claims.

Leaked slides from a press briefing led by Professor Chris Whitty revealed yesterday that food outlets and bars may make up 41 per cent of all transmission among the under 30s.

But this is in stark contrast with data published by Public Health England, which suggests only four per cent of Covid-19 outbreaks can be traced back to the venues.

And NHS Test and Trace figures show a huge 75.3 per cent of transmissions take place home, with only 5.5 per cent happening in pubs, restaurants and churches.

After ministers confirmed they will not shut schools, experts have argued they have few options left in terms of where to close to reduce social interaction, which is where the virus spreads - meaning the axe may fall on the hospitality sector.

Many scientists have, however, argued against tightening the measures - and urged ministers to instead try to learn how to live with the virus.

It came as No10 faced a concerted backlash from local leaders and MPs over plans to subject millions of people living in the North to even tougher restrictions from next week.

Sir Keir Starmer accused Boris Johnson of causing 'confusion, chaos and unfairness' by revealing the exact measures will be announced next week, while they are still being discussed.

Chief Medical Officer Professor Chris Whitty briefed 149 MPs from the North and the Midlands yesterday to tell them that a 'significant proportion' of exposure to coronavirus was happening in the hospitality sector. 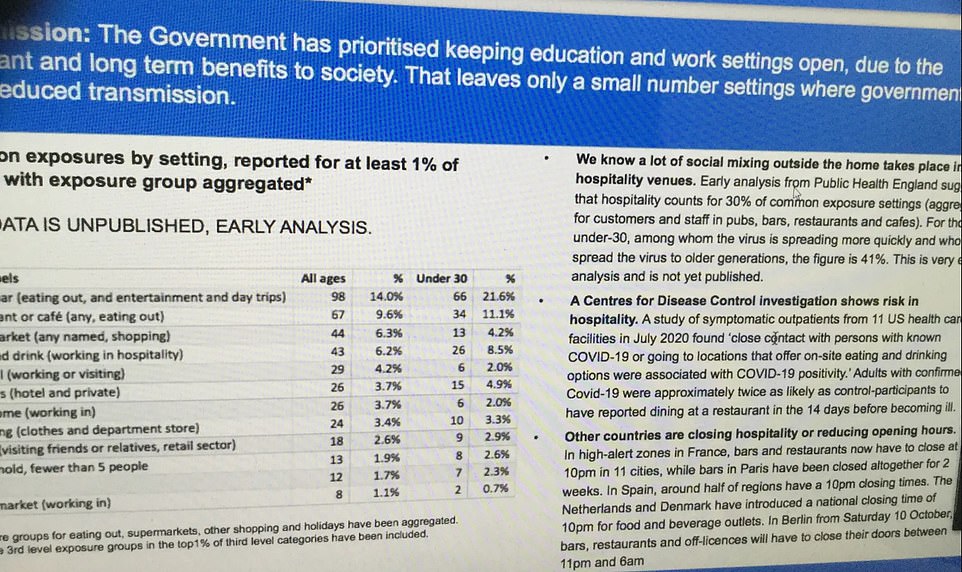 Government data had claimed 32 per cent of transmission may be occurring in pubs, bars, cafes and restaurants, but it has emerged that data was taken from a sample of less than 170 businesses 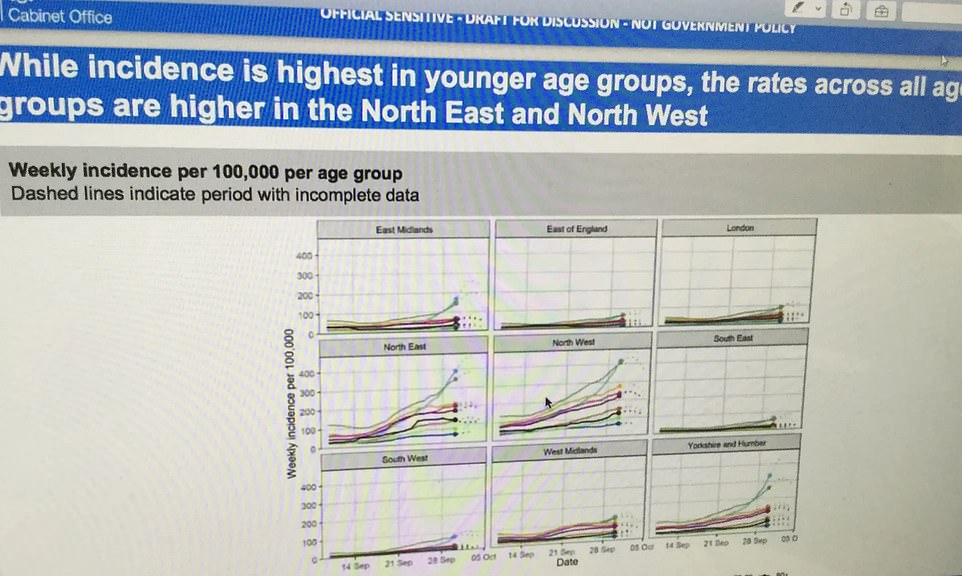 These graphs were also shown at the briefing. The suggest infections across all age groups are higher in the North of England than the rest of the country 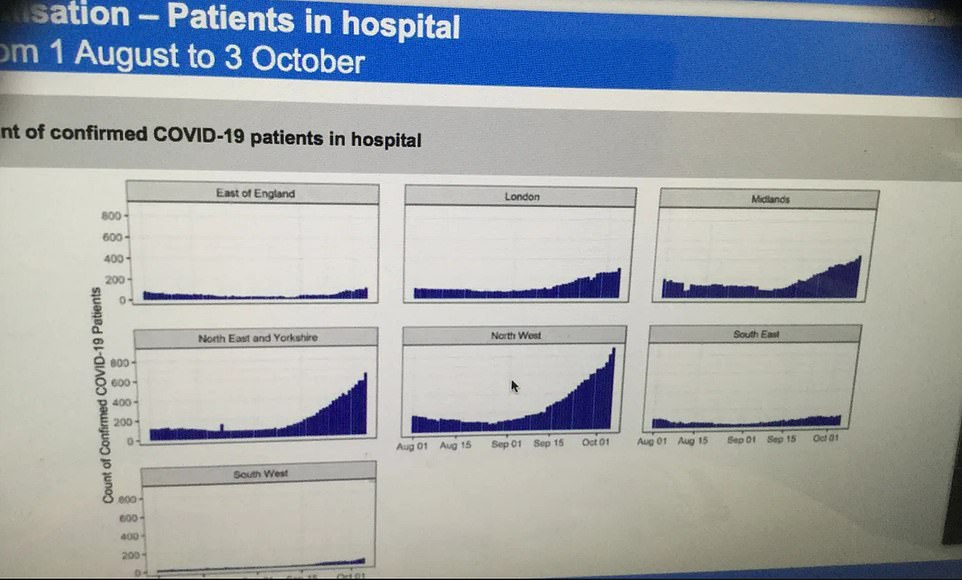 The document that spilled the beans

The controversial data quoted by Professor Whitty is based on an 'enhanced contact tracing' exercise, the Department of Health said.

It asks people who they met – and where they met them. But it is based on a very small sample.

If two infected people both tell tracers that they have been to a venue in the past week, it is seen as an indication, but not proof, that the virus may have been transmitted between them.

But they don't even have had to be there at the same time.

The data shows there were 98 occasions where two or more people told contact tracers they had been to the same pub.

Another 67 cases referred to people having been to the same cafe or restaurant.

One Tory MP from a Red Wall seat told The Telegraph: 'It was very clear to everyone on the call that they had cobbled together this data as a retrospective attempt to justify closing pubs.

'Given what we know from the official NHS figures, why are they quoting data from a tiny survey carried out in America? It's just meaningless.'

A Labour MP in a northern seat said: 'We have all been calling on the Government to give us the evidence behind curfews and pub closures, and this is the best they can come up with. It's quite astonishing, and it's clearly an attempt to soften us up for bad news that's coming next week.'

Last night the British Beer and Pub Association warned the Government that the data was not good enough to justify the closure of pubs.

One expert suggested 7,000 venues across the North would be forced to close. But Downing Street denied that any decisions had yet been taken on lockdown measures.

One Tory MP who attended the briefing

PREV Coronavirus UK: Sophie, Countess of Wessex is self-isolating at home
NEXT Troubled girl, 16, takes her own life on school grounds