A vaccine usually given to protect children from tuburcolosis could help adults fight against coronavirus, according to researchers at the University of Exeter.

The Bacillus Calmette–Guérin (BCG) vaccine will be enrolled to 1,000 people after the shot was found to stimulate the immune system.

It would not be the ultimate solution, but would instead help people fight off coronavirus until more effective vaccines are discovered.

Prof John Campbell, at the University of Exeter Medical School, told the Guardian the vaccine could be a 'global game-changer'. 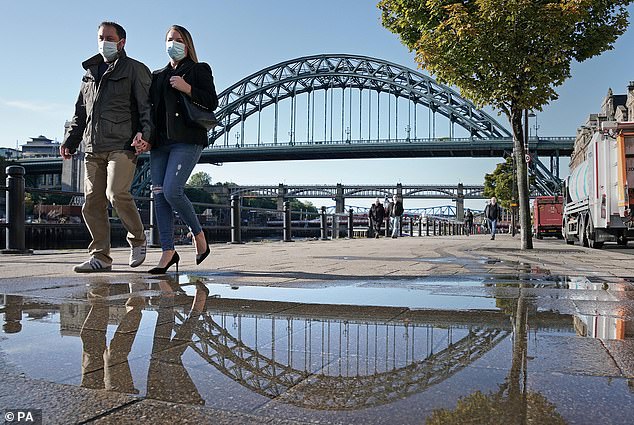 The Bacillus Calmette–Guérin (BCG) vaccine will be enrolled to 1,000 people after the shot was found to stimulate the immune system. Pictured, people wearing masks in Newcastle

The University of Exeter will enroll 2,000 UK community healthcare workers for the international Brace trial - which is recruiting 10,000 volunteers worldwide.

Volunteers for the trial will either receive a shot of BCG or a placebo. They will then be monitored for a year to see if the vaccinated group pick up fewer Covid-19 infections or have fewer symptons.

Preliminary results are expected in six to nine months. 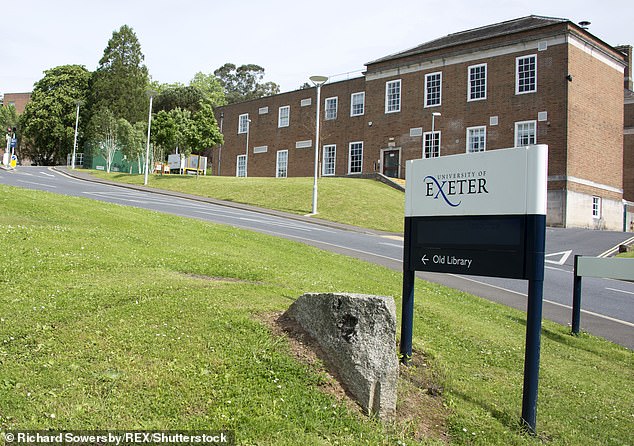 The University of Exeter will enroll 2,000 UK community healthcare workers for the international Brace trial - which is recruiting 10,000 volunteers worldwide (file image)

BCG usually causes an immune response against the bacterial disease TB - but it is now thought to help protect against viral infections.

What is the Bacillus Calmette–Guérin (BCG) vaccine?

The Bacillus Calmette–Guérin (BCG) vaccine is only given to those who are thought to be at an increased risk of coming into contact with Tuberculosis (TB).

BCG vaccination is recommended for babies up to 1 year old who are born in areas of the UK where TB rates are higher than in the rest of the country, including some parts of inner London, or who have a parent or grandparent who was born in a country where there's a high rate of TB.

BCG vaccination may also be recommended for older children who have an increased risk of developing TB, such as children who have recently arrived from countries with high levels of TB or who have come into close contact with somebody infected with respiratory TB.

BCG vaccination is rarely given to anyone over the age of 16 because it does not work very well in adults.

But it's given to adults aged 16 to 35 who are at risk of TB through their work, such as some healthcare workers.

Althought it used to be given to secondary school children, in 2005 it was replaced with a targeted programme for babies, children and young adults at higher risk of TB.

This is because TB rates in the UK are low in the general population.

Last month trial results published in the journal Cell suggested elderly people have fewer respiratory infections after having the vaccine, according to work by an international team of scientists'.

'If we see anything close to that sort of protection for coronavirus, this could be a global game changer,' Campbell said.

The vaccine is designed to stimulate the adaptive immune system which can then release antibodies to destroy invading pathogens in TB.

But it also offers a boost to the body's 'innate' immune system, meaning infections can be fended off before they get the chance to take hold. It is this effect that has given scientists hope it could work as a coronavirus vaccine.

If found to protect against viral infections the vaccine could be rolled out in future pandemics.

Mihia Netea, a researcher at Radboud University in the Netherlands, said: 'We think that in a non-vaccinated person, the virus comes in and starts to multiply, but the host defences are slow, so the virus has a chance to multiply a lot.'

If the infected person had been given the BCG vaccine, however, the trial seeks to prove it would boost the immune system's response and prevent the virus from multiplying so quickly.

The trial comes after it was revealed Covid-19 jabs are expected to be on offer by the NHS from as early as next month, as five mass vaccination centres are planned to be in action by Christmas.

Leaked provisional documents revealed a plan for hundreds of NHS staff to be deployed in five sites across the country - injecting tens of thousands of the public each day, reported The Sun.

Those most vulnerable to coronavirus will be called up first, with centres manned by trainee nurses and paramedics planned for Leeds, Hull and London, the publication reports.

In addition to the five static sites of giant scale, GPs and pharmacists will be asked to assist in the mass vaccination effort, with a fleet of mobile units to be used to reach vulnerable communities and those in care homes.

A source told The Sun: 'The earliest we are likely to get the first trial results is in a month's time - which means the best case scenario for a potential roll out is just before Christmas.

'But planning is well under way, so there will be no delay in vaccination once we have a working jab.'

Care home residents and staff will be the first to get a Covid-19 vaccine when one is approved, according to fresh government advice.

Everyone over the age of 80 and NHS staff will be second in line, updated guidance from the Joint Committee on Vaccination and Immunisation states.

The body, which consists of 20 top scientists, advises ministers on all vaccines. It admitted its guidance for any UK Covid-19 vaccination scheme is likely to change in the future.

Matt Hancock previously pledged that Britons with underlying conditions would be near the front of the queue for any jab. But millions living with heart disease or other ailments that raise their risk of dying of Covid-19 won't be vaccinated until everyone over the age of 65 is inoculated, according to the new guidance.

WHO WILL GET A COVID-19 JAB FIRST?

Under the proposed ranking by the Joint Committee on Vaccination and Immunisation, the vaccines will be rolled out in the following order:

Provisional plans state the end of this month as the vaccine