Police have called off the search for a surfer who went missing off the coast of Western Australia after he was attacked by a shark.

Andrew Sharpe, a father-of-two known as 'Sharpey', was surfing at Kelp Beds in Wylie Bay, near Esperance on Western Australia's south coast, when he was 'flung into the air' at 11am on Friday.

Mr Sharpe hasn't been seen since, with his surfboard later washing up on the beach with bite marks on it.

Police confessed on Saturday night they had lost hope of finding him alive, and by Sunday afternoon decided to officially call off the search. 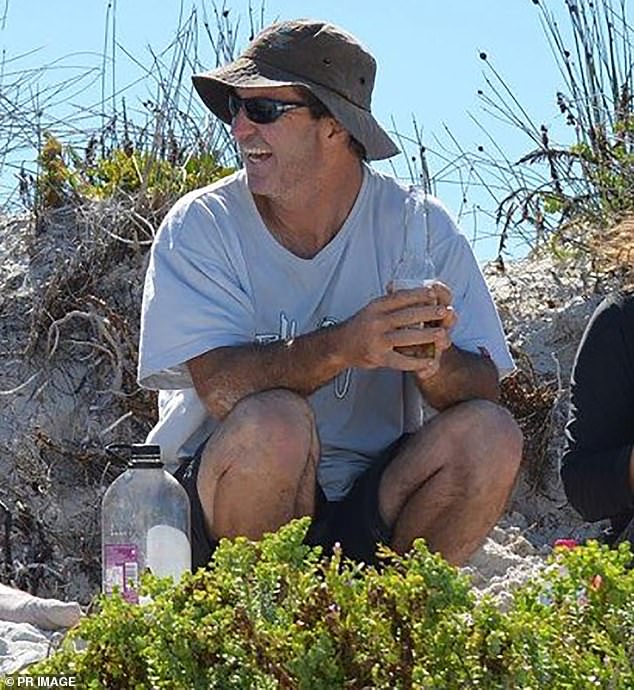 Andrew Sharpe, a father-of-two known as 'Sharpey', was surfing at Kelp Beds in Wylie Bay, near Esperance on Western Australia's south coast, when he was 'flung into the air' at 11am on Friday

His family released a touching tribute to the 'loving father, life partner and brother'.

'He would do anything for anyone and was a great and loyal mate to his friends and people he met.

'He was an experienced surfer of 40 years and he loved the ocean immensely. He knew the risks and we knew the risks as well. They had been discussed often. He will be greatly missed by us all.'

The devastated family thanked first responders and the local community for the support, as well as everybody who was with him on Friday before he disappeared.

'We live in an amazing town,' they said.

'This is a devastating loss for the family of Mr. Sharpe and a tragic incident that will have an effect on the entire community of Esperance,' a police spokesman said.

A search party was called off at 2pm on Saturday due to bad weather but resumed at first light on Sunday.

Two pieces of a wetsuit were found in the same area that Mr Sharpe went missing on Saturday but police say DNA testing was required.

His surfboard was washed ashore on Friday with 'obvious signs of shark attack'.

'We'll continue on for as long as we possibly can… and that's about trying to bring some closure to Mr Sharpe's family,' Sergeant Tarasinski said.

Mr Sharpe was bumped off his board by the shark before being dragged down into the water, the West Australian was told.

Around eight surfers are believed to have witnessed the horror attack.

Sergeant Tarasinski said search teams including divers were in the water from 8.30am on Saturday.

'The dive team were conducting their searches from the back of the Surf Life Saving jetskis as opposed to diving in the water and that's due to the risk,' he said.

Locals had even taken to the water in vessels in the hopes of finding the 'much loved' surfer.

Mr Sharpe was out with a group

PREV Students arrive at college in hazmat suits
NEXT Troubled girl, 16, takes her own life on school grounds