Thousands of survivors have reported being plagued by symptoms such as fatigue, shortness of breath, muscle pain and heart arrhythmias months after beating the disease.

But scientists are still baffled by the lasting effects of coronavirus, likened to this generation's polio.

Academics at the National Institute for Health Research — headed up by Professor Chris Whitty — were asked to review the limited evidence on long Covid to help both patients and doctors understand the 'phenomenon'.

Their findings, released today, warned that even children can suffer and it can't be assumed that people who are at lower risk of severe illness and death from Covid-19 are also at low risk of lasting side effects.

Doctors cautioned some mental health problems such as anxiety and depression in 'long-haulers', as they are known, could be down to lockdowns, as opposed to the virus itself.

The experts also claimed that the symptoms could be grouped into four different groups: 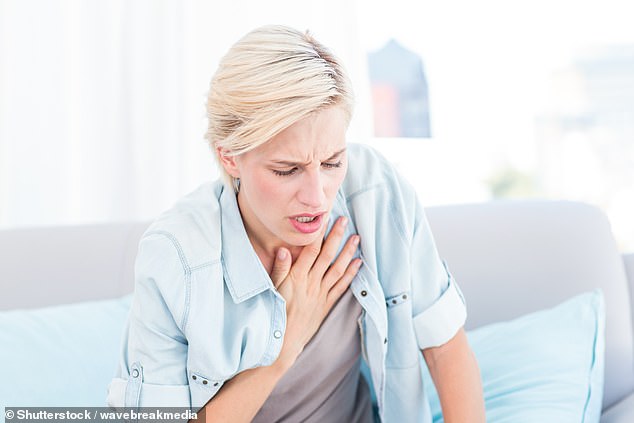 Long Covid could actually be four different syndromes but scientists admit 'we still don't know' who is most at risk or how to treat it. Some people suffer shortness of breath (pictured)

Dr Elaine Maxwell, the lead author of the review from NIHR, said: 'The overwhelming message is this is not a linear condition.

'The lack of distinction between these syndromes may explain the challenges people are having in being believed and accessing services.'

The team at NIHR, which is primarily funded by the Department of Health and works in partnership with the NHS, did not give a detailed description of each of the syndromes in the paper.

WHAT ARE THE FOUR TYPES OF LONG COVID?

Critically ill patients can suffer a range of health problems after a long stint in hospital. This can include muscle weakness, due to being stationary for so long, which can make basic tasks difficult. They may suffer anxiety or another mental health problem from the trauma of their illness. Typically post intensive care syndrome may cause some brain dysfunction, such as inability to remember things, which can affect whether the patient can return to work.

Many people reported parallels with this syndrome, which can be seen with infection after enterovirus or rubella, for example. It may include ongoing fatigue and 'brain fog' that may make it difficult to concentrate or remember things.

Doctors have persistently said Covid-19 is not just a respiratory disease, but a 'multisystem' disease, affecting all parts of the body. Organ damage has been seen particularly in the lungs and heart, NIHR said. Liver and pancreas damage has also been noted by scientists.

This group report 'floating' symptoms that make it difficult to categorise them into any of the previous three groups. They suffer an illness linked to one part of the body – such as the respiratory system, the brain, cardiovascular system and heart, the kidneys, the gut, the liver or skin – which later abates only for new symptoms to arise in a different part of the body.

It may cause symptoms such as muscle weakness due to being stationary for so long - an indirect cause of the virus itself - which can make basic tasks difficult.

PICS patients may suffer anxiety or another mental health problems, or brain dysfunction, such as inability to remember things, which can affect whether the patient can return to work.

Some patients experience 'fatigue and brain fog in a way that’s consistent with PVFS', a syndrome seen after infection after other viruses like enterovirus or rubella.

It is not clear yet if organ damage after Covid-19, also seen in the liver and pancreas, will be permanent.

But the team admitted a 'significant' number of people are in the fourth category, and do not complain of continuous problems and instead suffer a 'rollercoaster of symptoms that move around the body'.

Dr Maxwell described the fourth group as having fluctuating symptoms that are transient, and therefore difficult to test for.

She said: 'A significant group have a symptoms that don't fit those categories. They describe a rollercoaster of symptoms that move around the body and do not progress towards recovery.

'We hear that some may start with a mild infection, often described as less severe than a previous chest infection, although had no fever or no cough. Symptoms then appear in different parts of the body such as the heart, skin or gut.

'We heard from one person who had never been in hospital, who developed a crushing headache after six weeks which was later diagnosed as encephalitis.

'Others developed new heart arrhythmias and fainting up to six months into their symptoms journey.'

Such a wide range of symptoms, and different presentations of illness, mean that it is hard for doctors to diagnose, which means that it is equally difficult for patients to access the appropriate care, they added.

It is unclear how many people suffer with Long Covid.

WHAT ARE THE SYMPTOMS OF LONG COVID AND HOW BAD IS THE PROBLEM?

Covid-19 is described as a short-term illness caused by infection with the novel SARS-CoV-2 coronavirus. Public health officials tend to say people will recover within two weeks or so.

However it's become increasingly clear that this is not the case for everyone, and that the two-week period is only the 'acute illness' phase.

The North Bristol NHS Trust's Discover project, which is studying the longer-term effects of coronavirus, is just one of a handful of studies to have shown the long impact of Covid-19. However it only studied hospital patients.

A total of 163 patients with coronavirus were recruited to the study. Nineteen of those died. The remainder were invited for a three-month check-up and 110 attended.

Most (74 per cent) had at least one persistent symptom after twelve weeks. The most common were:

Patients who had suffered more severe Covid-19 reported more symptoms on their follow-up.

Other long term symptoms that have been reported by Covid-19 survivors, both suspected and confirmed, anecdotally, include:

The impact of Long Covid on people who had mild illness have not been studied in depth yet.

Data from the King's College London symptom tracking app shows that up to 500,000 people in the UK are currently suffering from the long-term effects of Covid-19.

That's according to the founder of the Long Covid Support Group, Claire Hastie, who said the lasting effects of Covid-19 had left her wheelchair-bound after being diagnosed in March.

A survey recently found a third of British doctors have treated patients with long term Covid-19 symptoms, including chronic fatigue and anosmia.

But the experts noted the UK Facebook support group they drew case studies from has 35,000 members and

PREV Shops could soon offer cashback without purchases as ministers plan to rip up ...
NEXT Troubled girl, 16, takes her own life on school grounds