Intensive care units at Liverpool's biggest NHS trust are no busier than normal for this time of year, it emerged today.

Councillor Paul Brant sparked fears yesterday after claiming the city's critical-care units were already 95 per cent full and 'filling up very fast' amid a spike in Covid-19 cases.

But Liverpool University Hospitals NHS Foundation Trust, which runs three hospitals across the city, dismissed the claim, insisting their units were only 80 per cent full yesterday morning with just 47 of 61 critical-care beds occupied.

This means they are quieter than normal for this time of year, MailOnline revealed yesterday. The trust's intensive care unit is normally 85 per cent full in October.

However, doctors fear hospitalisations will surge in the coming weeks because of a spike in coronavirus cases. It can take patients up to a fortnight to become seriously ill and need NHS treatment for the disease.

It comes as data shows Liverpool's infection rate has more than tripled since the end of September, leaving the city as one of the UK's Covid-19 hotspots.

More than 500 cases were diagnosed for every 100,000 people living in the city in the week ending October 9 — up from around 150 over a fortnight ago, according to Government data.

Liverpool is currently the only place in England to have been plunged into a 'Tier 3' lockdown, with gyms, pubs and other hospitality venues forced to close for four-weeks to stem the tide of infections. 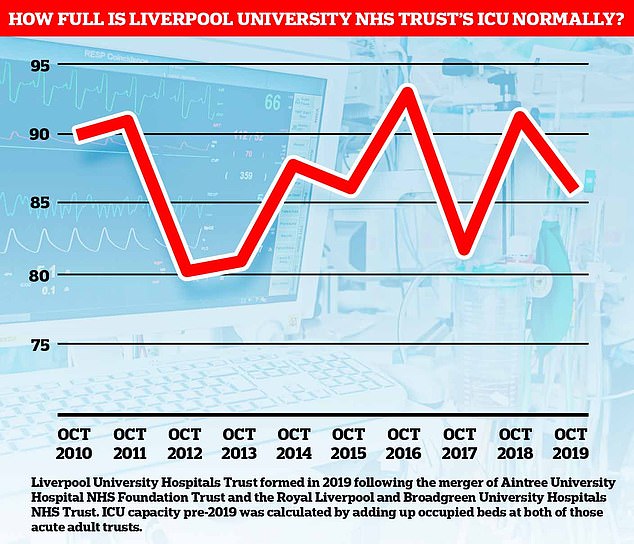 NHS data reveals the units are normally 85 per cent occupied at this time of year. But at present they are only 80 per cent full, the hospital trust has said 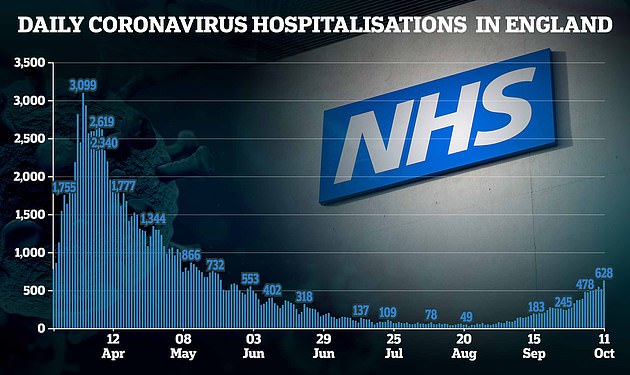 Hospitalisations across the country have been rising since the end of August, yesterday reaching levels higher than the start of June

Below is the proportion of these beds occupied in October over the last ten years:

'It has become clear that the intensity of the demand on hospital services here in Liverpool is crowding out anything other than dealing with Covid-19,' he said.

His concerns were echoed by a top paediatrician on the Scientific Advisory Group for Emergencies (SAGE), who was awarded an MBE last week.

Professor Callum Semple, who also works as a doctor in the city, warned yesterday 90 per cent of critical-care beds were full.

In a video released by Liverpool City Council he said that without action their critical-care capacity would be exceeded in a week.

'We have got over 300 patients in beds and our intensive care capacity is currently running at 90 per cent,' he said.

'At this rate we are looking at exceeding healthcare capacity in the next week or so.'

PREV Ryanair brawl: Fight breaks out on flight from Malaga to Manchester
NEXT Troubled girl, 16, takes her own life on school grounds