It was approaching dawn on August 9, 1944 and the seven prisoners of war caught operating behind enemy lines in German-occupied France thought they knew their fate.

After weeks of imprisonment, including brutal interrogation at the hands of the Gestapo, their end was near.

German SS men, armed with automatic weapons, led the seven SAS men, all of whom were in handcuffs, from a lorry to a clearing some 100 yards into a wood.

'Are we going to be shot?' asked Corporal Jean Dupontel, one of the prisoners.

'Of course you're going to be shot. What do you think this is, a picnic?' said one of the guards, with a snigger. 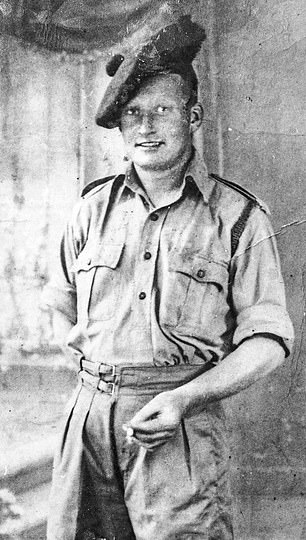 SAS soldier Corporal Thomas 'Ginger' jones (pictured left and right, as an older man) was one of seven prisoners of war who was caught operating behind enemy lines in German-occupied France

Dupontel, who was dark-haired and slightly built, had spent the previous three years serving in the British Armed Forces.

Now he had been weakened by torture and a lack of food. He was also so scared that his knees began to tremble and he half fell to the ground but the butts of several SS rifles propelled him forwards.

As Dupontel was lined up to be shot, his thoughts turned to his younger brother, Antoine, whom he had not seen for five years but who he knew was fighting with the French Resistance.

Then, as he listened to the birdsong, he thought of his parents, who lived in a tiny house in Brittany.

'God help me,' he whispered under his breath. 'I'm too young. I don't want to be shot down like a dog under these trees.'

As the men prepared to be executed, Dupontel glanced at his best friend Corporal Thomas 'Ginger' Jones, short and stocky, who was the last man in the line.

An SS captain read out a statement, first in German, before one of his sergeants translated it into English: 'Having been tried and found guilty before a court martial of collaborating with French terrorists and in this way endangering the security of the German Army, you have been sentenced to death by shooting.'

What happened next was astonishing and led to one of the most remarkable stories of the entire 1939-45 war.

Moments earlier, Dupontel had managed to work his right hand free from the handcuffs but he kept his arms in front of him to pretend that they were still restricted.

As the group of SS soldiers raised their weapons to fire, Dupontel let out a roar like a wild beast and rushed forward, breaking through a gap between one of the German officers and a civilian who was watching the execution.

Serge Vaculik was, in fact, Jean Dupontel's real name. His family were Czech, but when he fought with the British he was advised to change his name in case he was captured: his Gestapo interrogators would probably have given him a harder time if they knew he was Czech, not French

In the darkness, he raced forwards and as one of the SS soldiers opened fire, he fell to the ground – not shot because, in fact, he had tripped on the root of a tree. He picked himself up and ran through trees, brambles and foliage as bullets whistled by his head and body.

'Dear God, help me,' he shouted. But at the edge of the forest he came to a tall, thick hedge.

He could hear the Germans were on his heels and so he launched himself, arms first, through the top of the hedge, briefly remembering what he had been taught at his commando training course in Inverness, Scotland.

Landing with a roll forwards, he glanced at a surprised horse standing close by, picked himself up and, once again, ran for his life towards another wood.

Eventually, Dupontel was free – alone in the French countryside just over two months after the D-Day landings.

Dressed in civilian clothing, he was also limping from a badly swollen right ankle that he had injured as he frantically made his escape.

Out of desperation, he sought help from French villagers, some 40 miles north of Paris, hoping that they would take pity on him and not turn him over to their German masters.

He was in luck: he was befriended by a French butcher who had a cousin in the Maquis, the French Resistance.

As he prised off the second handcuff, his thoughts turned to his six comrades who he imagined had been shot and buried in the wood. Distraught and frightened as he sheltered in a farmhouse, the slightest noise made him jump.

Soon Dupontel linked up with the butcher's cousin and his Resistance friends. And days later, as his ankle began to heal, his new friend told him that three miles away villagers had found a man who didn't speak any French but who was gesturing for help.

At first, Dupontel feared it was a trap, but he agreed to accompany the Frenchman to see the stranger. The two men slipped into a house and listened to the stranger talking in English.

The voice coming from the kitchen was unmistakable to Dupontel: it was Ginger Jones, so he entered the room. The two friends stared at each other as if they had both seen a ghost, then they shook hands and hugged each other warmly.

'Is it really you, old man?' Jones said. 'It can't be. I was sure you were dead.' Dupontel told Jones he had been equally sure that he was dead.

As the excitement calmed down, Jones explained that in the commotion caused by Dupontel's dash for freedom, he too had raced away from his position at the end of the line before tripping and falling.

'Bullets hit the ground around where I was lying.

'I was afraid to move. I knew that my only chance now was to pretend to be dead. I heard someone come up to me and my heart almost stopped beating… I was astonished at still being alive,' Jones recalled. When the execution squad left, Jones had picked himself off the ground and counted the five dead bodies of his comrades.

Then he made his way up a hill and eventually came to a village where he, too, was