Before he even knew them, he had photographed them. Neal Preston's first foray into Queen's rhapsody was in 1976 when he snapped one of their shows at the Santa Monica Civic Auditorium. One year later, he was asked by the head of publicity at Elektra Records to go on tour with the fantasmic British rock band.

'From the beginning, all four of the guys were quite genial and seemed genuinely pleased to have me around. I was given a very long leash, which was what I needed,'

Inevitably, Queen and their crew of roadies would become Preston's 'second family.' Over the course of ten years, he followed them on stage and off. Capturing them in candid moments at soundchecks, rehearsals, band meetings, press interviews, planes, trains and tour buses. 'To me if felt like a World Series game, two of three times a week.' 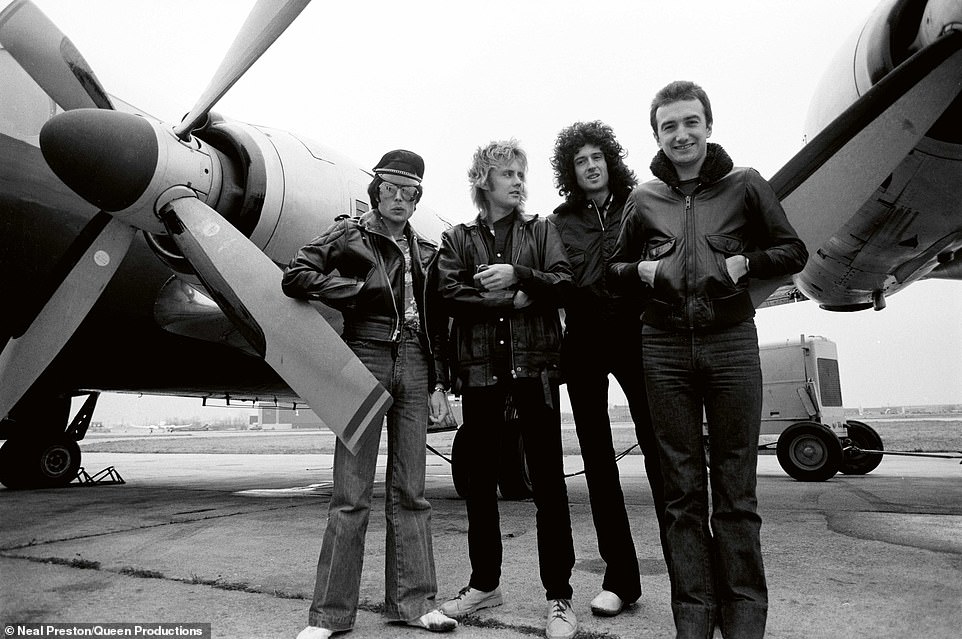 Veteran rock photographer, Neal Preston first photographed Queen in 1976 when they were playing a gig at the Santa Monica Civic Auditorium. One year later, he was asked to go on tour with the British band and subsequently spent 10 snapping pictures of them until their last tour in 1986. Above, Queen and their Britannia 4-jet, USA, 1978

Preston took the this iconic photo of Freddie Mercury on stage at Wembley Stadium in 1986. The tour would inevitably become Queen's last, as Mercury was diagnosed with AIDS one year later. He said: 'It really hit me that this was not the band I’d shot in 1976 in Santa Monica. This band was another animal altogether. They were mammoth' 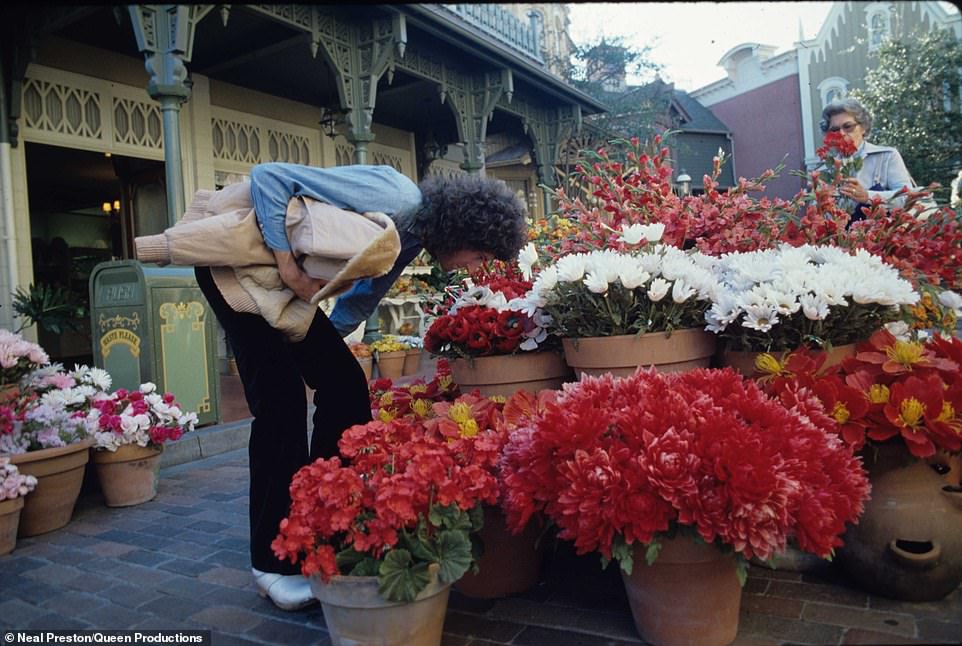 Queen guitarist, Brian May stops to smell the the flowers at Disneyland. Preston said that May came across 'aloof' when they first met, but eventually they bonded over a mutual interest in stereoscopic photograph and have become life-long friends. May is credited with starting the band in 1969 as a creative outlet while he studied astronomy at London's Imperial College. 'He's extremely bright. He has a doctorate in astrophysics if I'm not mistaken. So he is actually Dr. Brian May and not just the Brian May we know and love,' said Preston 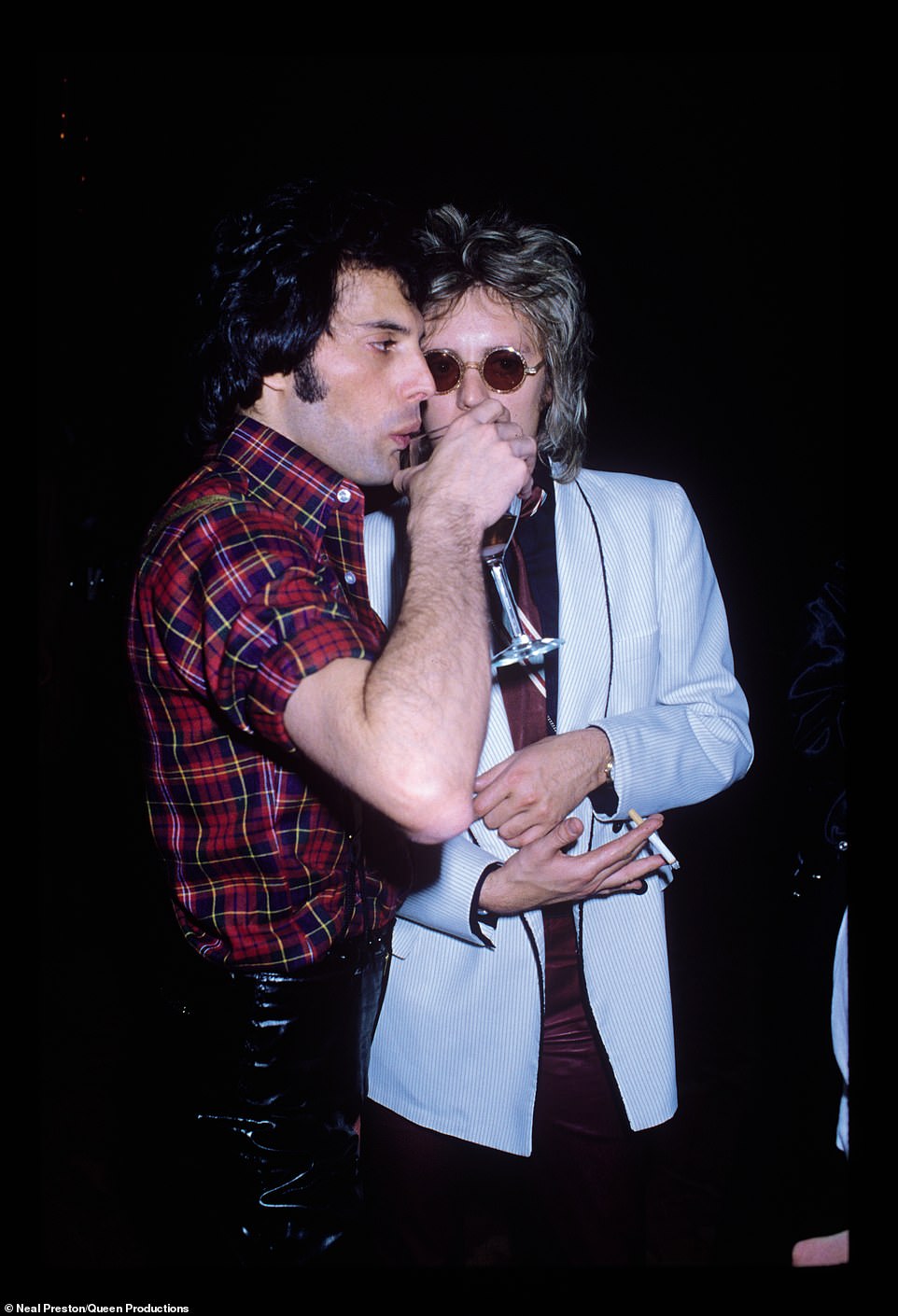 Freddie Mercury and Queen drummer Roger Taylor pause during the North American 'Jazz Tour' in 1978. Preston told DailyMail.com: 'Roger was the one that I initially gravitated towards because he had all the rock star trappings. He had the sense of humor, he's outgoing, the personality and style'

Born in Queens, New York, Neal Preston, 68, began his career as a photographer at age 16. But he admits, his 50-year long career happened on accident. 'It was fluke that some pictures were shown to some people who turned out to be concert promoters and started letting me and my buddies into shows in Queens, New York, and all of a sudden I'm a published photographer,' he told DailyMail.com in 2017.

Five decades later, an entire room in Preston's Burbank, California home is used to keep his prolific collection of photographs. He estimates that there are 'at least a million' stored in 122 filing cabinets where everything is alphabetically organized, starting with Abba and ending in ZZ Top. Somewhere in the middle is Q, for Queen - an archive he amassed over eight tours across the globe in ten years. 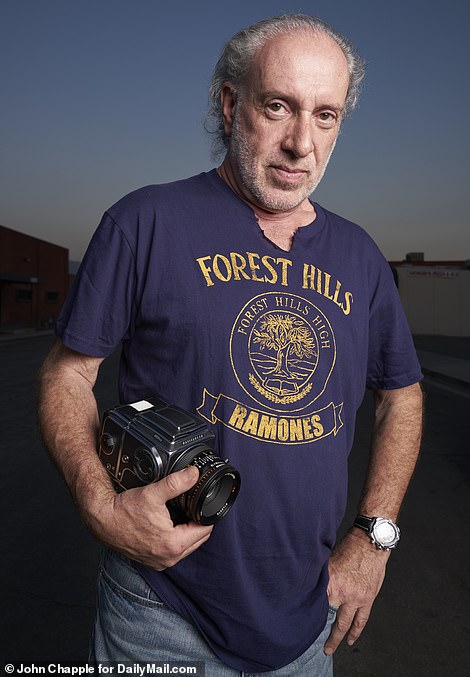 Born in Queens, New York, Neal Preston, 68, (pictured) began his career as a photographer at age 16. But he admits, his 50-year long career happened on accident

'From day one, every single Queen concert I've ever shot can only be described as a massive assault on my left frontal lobe (the part of the brain that governs creativity),' wrote Preston. From the minute he walked into the venue, he said something strange would happen. 'It was as if some futuristic artificial intelligence had taken hold of me and my Nikons suddenly had minds of their own.'

Now 200 of his favorite images (many of which, have never-been-seen before) are to be published in his forthcoming book titled, Queen: The Neal Preston Photographs. Published by Reel Art Press, the book features handpicked photos selected in collaboration with the band and forewords written by Queen guitarist Brian May and drummer Roger Taylor. It is available on Amazon and most bookshops.

'Many of my favourite Queen pictures are in this book, many of which haven't previously been published. Some of them are incredibly evocative, summoning up memories of those fleeting moments; things were moving too fast at the time for us to really take them in,' wrote Brian May in his forward.

Preston had already cut his teeth on tour with Led Zeppelin by the time he was asked to accompany Queen in 1977. He recalls how eager they were to know more about his experience with the legendary rock band. He said: '..it seemed like every band I worked with had that same look in their eyes: sooner or later Preston's gonna bust out some killer Zeppelin stories. When I first hooked up with Queen it was no different. But it wasn't typical fan-boy type stuff they asked me . . . it was more about how the Zeppelin organization worked, and lots of questions about Peter Grant.'

Likewise, Brian May wrote in his foreword: 'So after a few beverages of a night, we enjoyed hearing Neal's yarns about his adventures in similar situations to our own but with our heroes.' 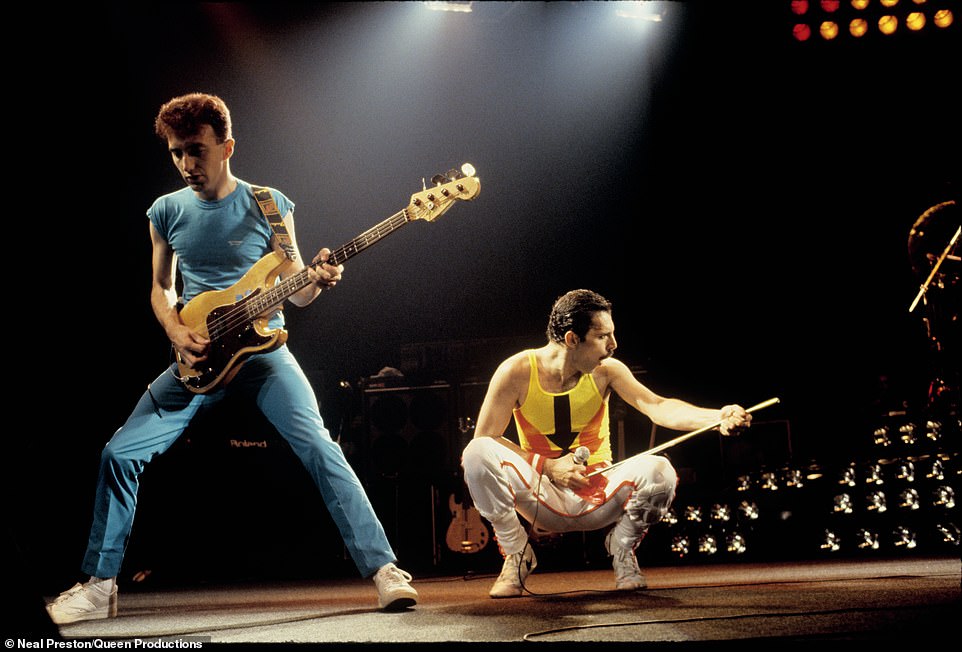 Queen bassist, John Deacon rocks out on stage next to Freddie Mercury during The Hot Space Tour in 1982. Preston said Queen shows were visually 'a feast beyond words. There was never a bad angle or camera position.' He said each tour after 1977 got 'bigger and bigger,' the productions were more ornate with larger lighting rigs, stage settings, and pyrotechnics. 'For me it was like being a kid in the ultimate candy store' 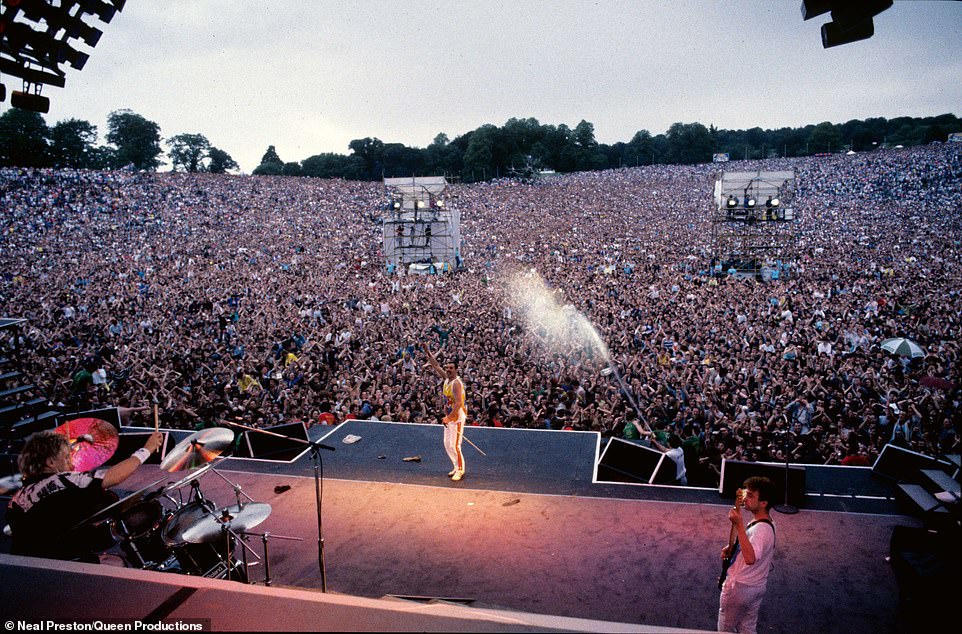 Queen, Slane Castle, Ireland, 1986. Preston snapped Queen standing in front of the massive audience that came to watch their gig at Slane Castle in 1986. He said, '...there were some of the most drunken rock fans I’d ever seen in my life at any show. Those people were world-class drinkers. They put the Russian fans at Billy Joel’s USSR shows to shame' 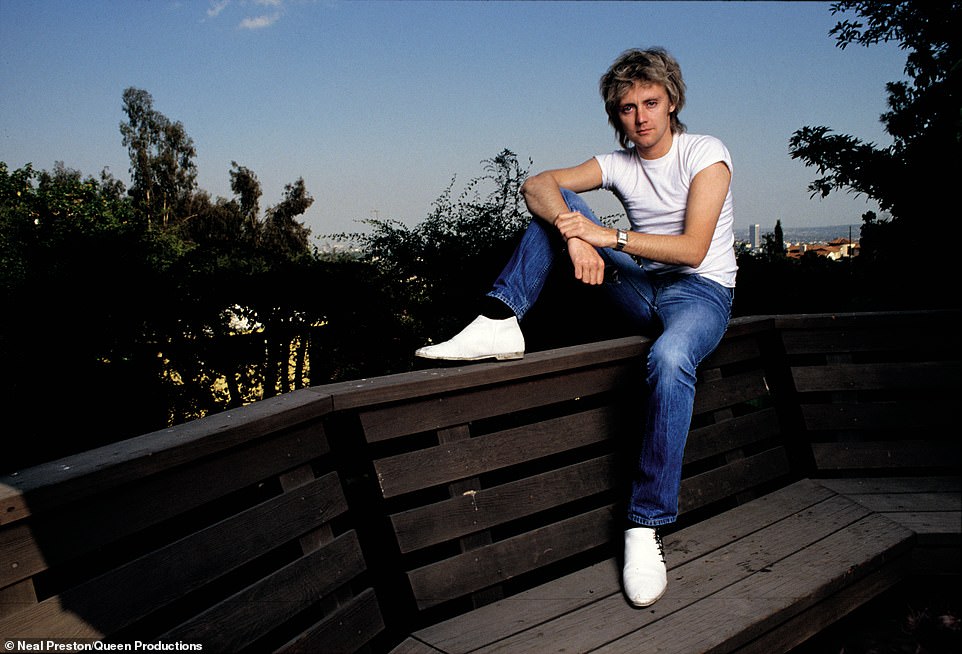 Queen drummer, Roger Taylor is pictured at home in Los Angeles. In 1968, Roger Taylor responded to an advertisement that Brian May posted for his early band named 'Smile.' May was immediately impressed with Taylor's chops and energy. In 1969, Taylor lived with and co-owned a stall at Kensington Market with Freddie Mercury that sold second-hand clothing. When Smile broke up, the three men started Queen and added John Deacon as bassist in 1971 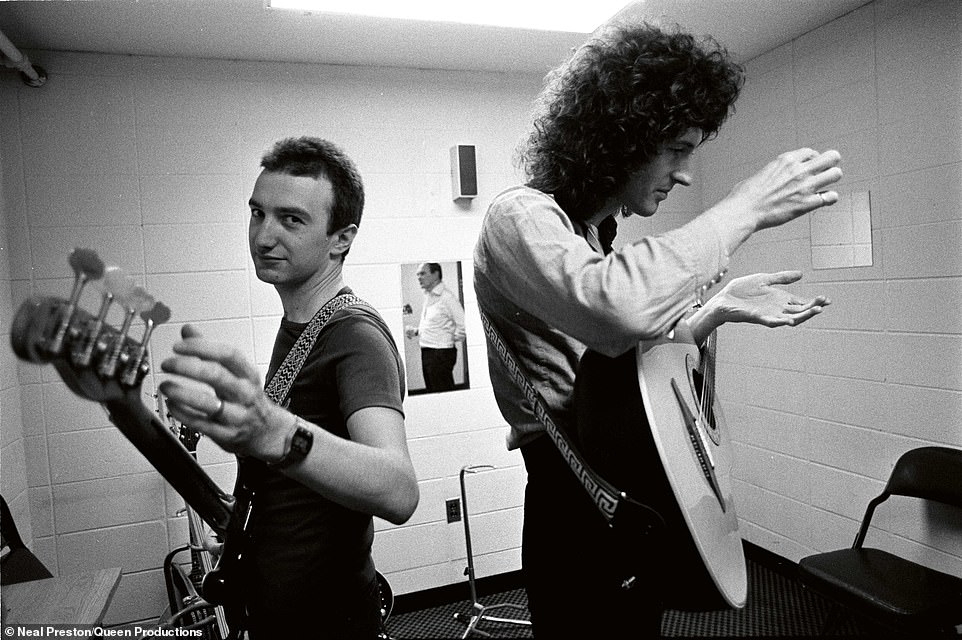 John Deacon and Brain May backstage, South America, 1981. Preston told DailyMailcom that one of his fondest moments was taking May to meet his parents. 'I will never forget, Brian May all six-foot-a thousand of him sitting at my mom's tiny, tiny, tiny little kitchen table eating scrambled eggs at seven in the morning. He added: 'Until the day she passed away, my mom used to say, 'how's that lovely boy for that from that group?'' 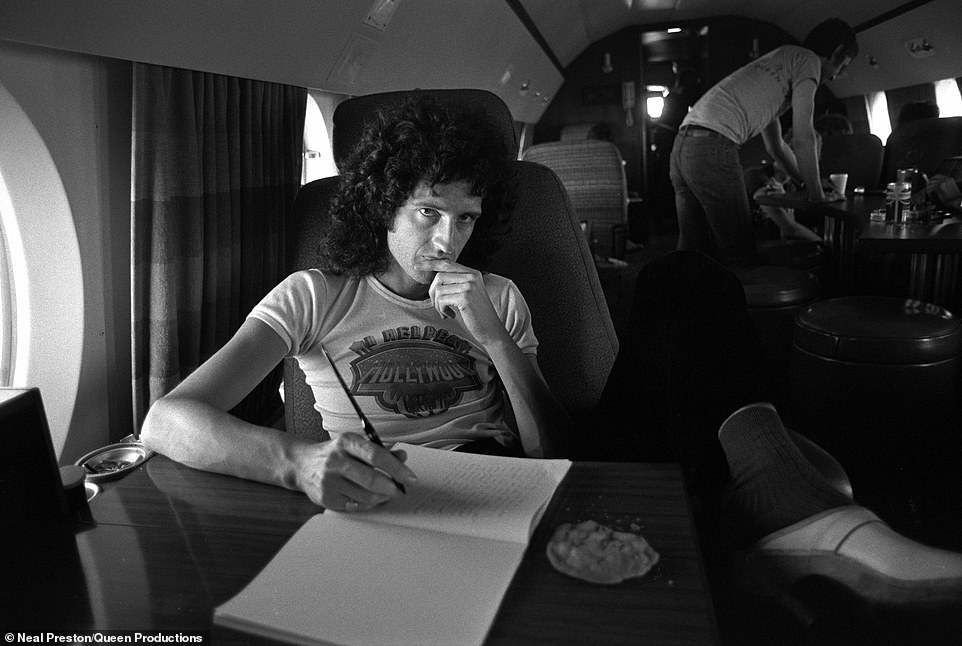 Neal Preston said that it took a while to get to know Brian May, but eventually the unlikely friends 'bonded over a lot of things.' He added: 'He's very bright, sensitive and a monster on guitar.' Above, Brian May during The Jazz Tour, North America 1978

Preston, who says he's a 'photographer first' and a 'fan, second,' recalls his first impression of the glamrock queens. 'Roger was the one that I initially gravitated towards because he had all the rock star trappings. He had the sense of humor, he's outgoing, the personality and style.'

'Deacon was usually pretty quiet and reserved but all of a sudden, every once in a while he'd come out with a zinger that would just cut everyone down, you know he was your typical 'keep your eyes and ears open and your mouth shut until it's time,' said Preston in an interview with DailyMail.com.

'Brian was the one that I ended up becoming closest with over the years,' he said. 'It took me a little while to get to know Brian, but once we got to know each other, we were friends for life.'

The unlikely friendship bonded over a mutual love for stereoscope photography, an obscure topic in which May is one of the leading experts in the world. 'He's extremely bright. He has a doctorate in astrophysics if I'm not mistaken. So he is actually Dr. Brian May and not just the Brian May we know and love.'

When it comes to Freddie Mercury, Preston says: 'The guy was so flamboyant, he was such a great photographic subject. But inevitably he explains how words always seem to fall short when it comes to the incomparable lead singer, he says that the spandex catsuit-clad front man lived and breathed the same persona he brought to the stage. As I like to say, no one on the face of this earth loved being Freddie Mercury, as much as Freddie Mercury did.'

'I have a little saying that there are