Six hundred thousand pupils are sent home due to coronavirus: Almost one in five children had to isolate last week... but just 10,000 tested positive for Covid-19 The majority of those sent home had not contracted Covid Only a minuscule number, or around 10,000, have actually tested positive Parents' group Us For Them said schools were struggling with DfE guidance

By Josh White, Education Reporter For The Daily Mail

The alarming figures from the Department for Education show nearly a fifth of children were off on October 22.

But the majority of those sent home had not contracted Covid and simply had potential contact with someone infected.

Only a minuscule number, or around 10,000, have actually tested positive, the figures showed. 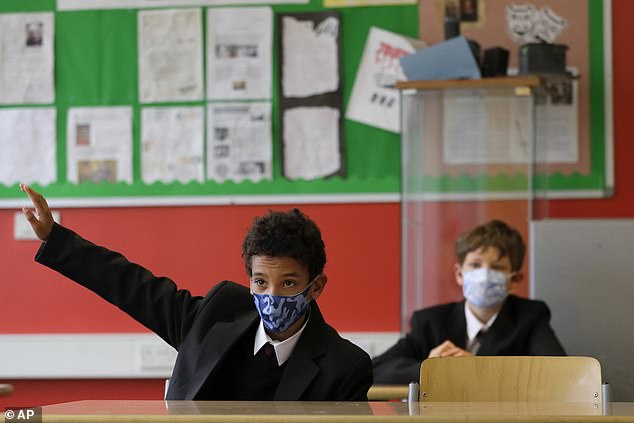 Parents' group Us For Them said state schools were struggling with DfE guidance which has left swathes of children being unnecessarily out of school.

Co-founder Molly Kingsley said: 'We know some schools are being sensible but we also know others are sending whole bubbles or year groups home.

Youth unemployment is set to hit the highest level in four decades after the furlough scheme ends this weekend, a report has warned.

Analysis by the Resolution Foundation reveals young people and those from ethnic minorities are bearing the brunt of the jobs crisis.

It found that one in five 18 to 24-year-olds who have been furloughed have since been thrown out of work – the worst jobs crisis for young people since the early 1980s.

A similar proportion of people from ethnic minorities have lost jobs after being on the Government's furlough scheme.

The report estimated the overall unemployment rate has risen from 4.5 per cent over the summer to 7 per cent last month.

But it said the jobless rate for 18-24 year olds has almost doubled since the crisis started to 20 per cent.