Residents and health officials on wealthy Martha's Vineyard have expressed their anger and disappointment after a wedding held on the island earlier this month became a COVID-19 superspreader event.

At least nine people, the majority of whom worked at the wedding, have tested positive for coronavirus after the gathering, health officials confirmed Wednesday.

They believe that wedding attendees broke the state's protocols by failing to quarantine for 14 days once they arrived to the state, as visitors to Massachusetts are required to do.

'Of the 9 cases linked to the event, 7 were reported on Martha's Vineyard and two reported in out-of-state wedding guests who were diagnosed after leaving the Island,' Tisbury health agent Maura Valley told the Vineyard Gazette.

'Of the seven cases we are following on the Island, two have completed their isolation and have been released and five are currently being followed by public health.' 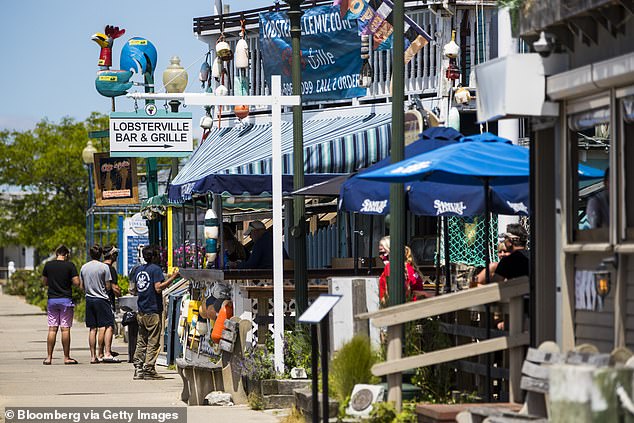 At least nine people have tested positive for coronavirus after a wedding in Martha's Vineyard over Columbus Day weekend, angering locals as the island's first large outbreak

Among the nine infected, only four attended the wedding and the other five worked at the event as locals express their anger that it was able to slip through the cracks.

'It's pretty discouraging to me,' Tisbury select board chair Jim Rogers said during a meeting on Tuesday night.

He noted that the community had gone to great lengths to ensure the transmission of coronavirus remained low on the island.

'And in one weekend, a group of people come down and have a wedding, and we have the largest cluster we've had since this whole thing started,' he added.

Residents were also angered to learn that more than half of the people confirmed infected so far were workers.

Peter Koines, who owns a bakery in the area, told the Daily Beast that he had refused to let any of his staff work at events since the pandemic began.

'We have done social-distancing dropoffs with no contact,' he said.

'But I have refused to provide any type of staff, if that's what they wanted. We wouldn't participate in anything like that, and I wouldn't ask my employees to put their lives in jeopardy.'

'There's a moral component,' Koines added of the wedding. 'It's frustrating to hear that someone decided it was OK to do that. This is the wrong thing to do.'

The town in Martha's Vineyard where the wedding was held or the venue have not been made public. 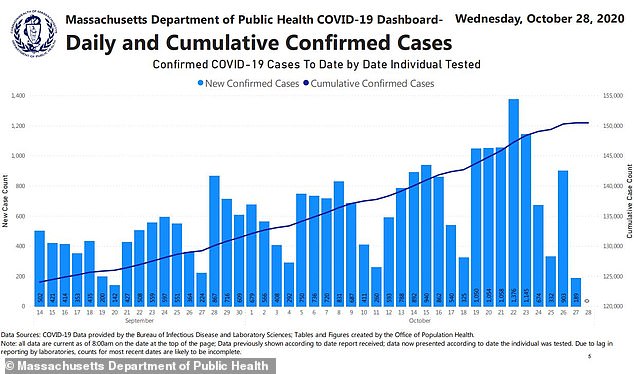 It comes as Massachusetts continues to experience a troubling spike in cases. This week, cases in the state reached over 150,000 and with more than 1,000 reported Wednesday 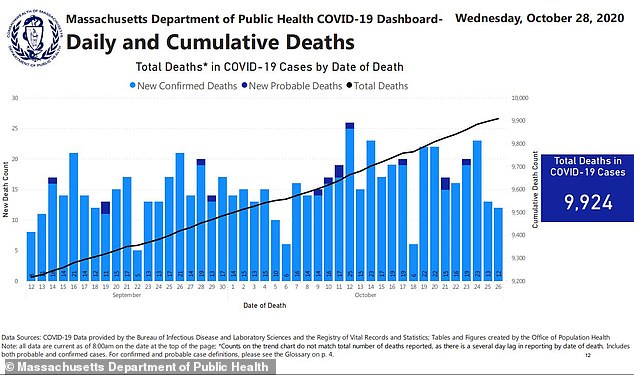 Deaths in the state also continue, getting close to 10,000 this week

It was held over Columbus weekend on October 11 and was split between an indoor and outdoor event.

Officials say it complied with the state's restrictions on event capacity - 100 people for an outdoor event and 25 people for an indoor event - but broke the travel protocol.

It is not known how many people attended the wedding but it was said to have been small.

'As careful as people are in their daily lives, if they then take part in large gatherings, those large events can be the major driver of disease in a community,' Boston Children's Hospital's Chief Innovation Officer, John Brownstein, told The Daily Beast.

'What we know from our understanding of COVID to date is that transmission isn't even, and there are superspreader events that can account for a large portion of cases. We've seen this over and over again through the pandemic. If we're participating in large gatherings, that will keep this pandemic raging on.'

Those attendees and staff who have since tested positive are believed