The Chancellor today addressed the country's burning questions as he discussed his fresh financial package in a Twitter Q and A session.

Rishi Sunak turned on the public spending taps again last week when he announced an emergency bailout for businesses and the self-employed that will cost up to £22billion.

But today he was grilled by members of the public who felt they'd been left in the dark ahead of what is set to be a gruelling winter for their businesses.

Mr Sunak was probed about 'whose money the government was spending' and asked what he will do to protect the livelihoods of those in the events industry.

Using the hashtag '#AskRishi', people were invited to submit their question to the Chancellor. 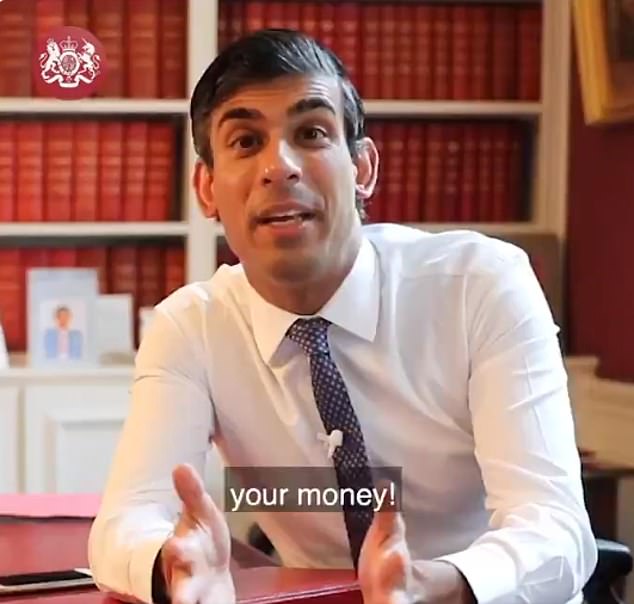 How the New Job Support Scheme will work

Workers at firms legally forced to close by coronavirus regulations will receive two-thirds (67 per cent) of their salary under expanded Job Support Scheme (JSS).

This is all paid for by the Treasury to the company, capped at £2,100 per worker.

Now employers will only face paying National Insurance and pension contributions, but the treasury believes this will impact only a very small number of firms.

Businesses will be able to claim the grant when they are subject to restrictions and employees are off work for at least seven consecutive days.

To be eligible you have to have been on the PAYEpayroll at the firm on September 23 this year.

The scheme will launch on November 1 and run for six months, with a review in January. Details of how businesses can apply are yet to be revealed.

The Government's original furlough scheme is due to end later this month and saw the Government pay 80 per cent of a worker's wages up to a monthly cap of £2,500

To be eligible, workers would have to work at least a third (33 per cent) of their regular hours. In this scenario, a worker would receive 77 per cent of their total wages, with the firm picking up 55 per cent. The Government contribution would have been capped at £697.92 a month.

Under Rishi Sunak's original JSS scheme they would have to work a minimum of 13 hours a week. For those 13 hours they would be paid £308. Of that, their employer pays £220 and the Treasury £80.

Under the new revised scheme, they would be paid £268, all paid by the Treasury, for as long as the business remains closed.

The Chancellor was asked by Twitter user Sara Zigman, 'Whose money are you spending?'

He continued: 'The government is not some entity that has its own money, the government only has money because people pay taxes and we borrow money - that's how we fund what we do.

'That's why I'm careful with how we spend money. It's why often I will say, look, we can't do absolutely everything that people want.

The Chancellor added: 'I never foresaw having to do anything like this when I got this job.'

Kerry Marriott, from Yorkshire, asked the Chancellor: 'I’d love to ask Rishi when my job will be included in a support scheme.

'As a sole trader I don’t have any employees, but my job needs support.

'I’ve been in business two years and don’t have an employer, why is my job treated differently and denied access to the JSS and SEISS?'

Sunak answered: 'So Kerry you are right the Job Support Scheme (JSS) is not for you but the Self Employment Income Support Scheme is there for those who are self-employed sole traders such as yourself.

'The good news is that we've announced also that there are going to be further grants for the self employed scheme.

'And now that we've extended our support for those who are in employment through the JSS we want to try and mirror the amount of support we give to those who are employed, to those who are self-employed. And that's how we figure out the grant value to make sure that there's broad parity between two groups of people.'

He continued: 'The other thing to say is that there's lots of other support available for small businesses like yours, which I hope you're taking advantage of - whether that's if you own a business property you may have received a cash grant.

PAUL THOMAS on... the plight of our pubs

The Bachelorette's Elly Miles breaks down after 'splitting' from Frazer Neate